The magic has been lost. I went out on Wanstead Flats for three hours this morning and didn't see a single Southern Migrant Hawker. Gutted. Plenty of birds though, but it was hard work. I reached the dizzy heights of 45 species, which is pretty average, including some non-guaranteed ones such as Hobby, Little Owl, and Lesser Whitethroat, but as is always the way, failed to find some that should have been nailed on. For instance I couldn't find a Blackcap or a Goldfinch. Chaffinch, Stock Dove and Heron all eluded me. I would generally expect to see most of these within about ten minutes of leaving the house, but such is life. Part of the reason is that I may have started too late. I set the alarm for five, but didn't manage to leave the house until half six, by which time many of the smaller birds become difficult, and Heron is usually a first half-hour after dawn job. Of course none of this matters. I had a nice time, and that was the sole purpose of my visit. Well, that and find a Wanstead mega, but this happens only infrequently, whereas I always have a good time. Except when I get mugged, which so far has only happened once, and long may it stay that way.

Highlight this morning was probably the Little Owl. I rarely see them perched up in the day at this time of year, there is too much foliage, but today it chose a bare tree. I was having a brief scan, more in hope than expectation, and there it was. I tried to walk around and get it from the front, but whilst doing that it was flushed by a Jay. Thanks Jay. I see the Owl perhaps one time in ten, and then fifteen seconds after I see it, you do too and chase it off. And could I then get a photo of you? Not a chance. 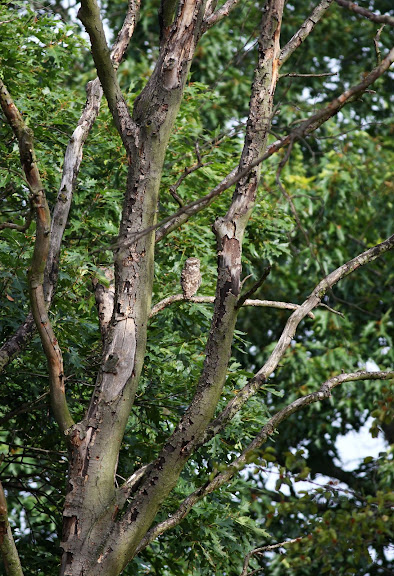 So that took me to half nine or so, and the rest of the day has been spent either playing with Pie, or arguing on the phone with a bank, who think that charging £25 for going £25 over my overdraft limit is perfectly ok. It gets better actually, as they charged me twice. Basically an annual direct debit I had forgotten about took me over by the £25, so they kicked it back and charged me £25. Did they call me to let me know? Go on, have a guess?! Then three weeks later the same company tried to claim the direct debit again, and with me still none the wiser, this then obviously took me £50 over my overdraft limit. Not wishing to be outdone, the bank kicked it back again, and decided that another charge of £25 was in order. I enquired to the lady on the phone whether this might continue indefinitely, with me getting charged £25 every three weeks until I owed them my house? I think the call centre staff are forbidden from recognising sarcasm, as she said that that wouldn't be possible. So far I have recouped one of the £25 "fees", and I am damned if I am going to pay the other one. Apparently it is in my terms and conditions. I informed the lady that I couldn't care less if they came and wrote it in large letters on my front door, and that I would not be paying it. I furthermore informed her that Vince Cable felt the same way about their banking practices as I did, but I'm not sure that his is a household name in India. I am currently awaiting a response from a supervisor as to whether a 100% rate of interest for a zero day overdraft breach strikes them as fair and reasonable, as the direct debit, the direct debit kickback and the fee all get processed on the same day. I have also asked whether a phone call informing me of the problem and giving me the opportunity to add funds to the account might not in fact have been more reasonable. So far I have not been called back, however I feel I have the moral high-ground on this one and expect to report victory soon. Honestly, what a bloody nerve. On the plus side, all I have with this particular bank is this overdraft, so they can keep on adding £25 to it for as long as they want and see if I ever pay it. Bastards. 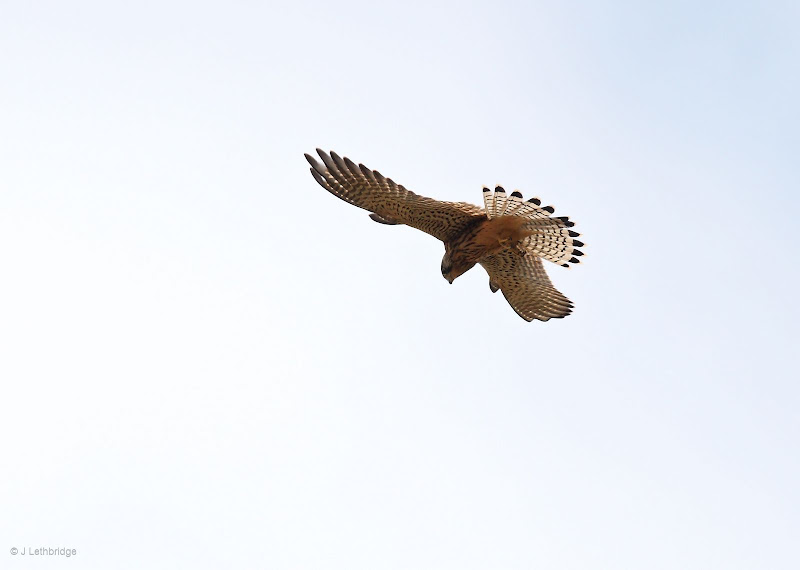 One of four Kestrels today.


Posted by Jonathan Lethbridge at 17:09