Now that we knew that the best warbler action occurred in the afternoon, we could devote our morning to something different. Anahuac NWR is between Winnie and High Island, and by all accounts was very birdy. We made it our first destination of the day, and with the sun gently creeping up drove the Shoveler Pond loop, a one way road about two miles long with a large shallow lake in the middle. There is an huge reedbed stuffed full of breeding herons and egrets, and all around the vast flat expanse of Anahuac. It did not disappoint, it was completely stuffed with birds. Hundreds of Cattle Egrets, Great White Egrets, Tricoloured Herons and Roseate Spoonbills. Least Bitterns hunted at the base of the reeds and Purple Gallinule squabbled in the ditches. The churrs, squeaks and whistles of Red-winged Blackbirds were a constant backdrop, and Orchard Oriole and Eastern Kingbirds sat atop the reeds. In the shallows Blue-winged Teal dabbled, Short-billed Dowitchers drilled, Black-necked Stilts swished and Stilt Sandpipers and Glossy Ibis probed, whilst flights of both Black-bellied and Fulvous Whistling Ducks zoomed overhead. There were so many birds we did not know where to turn. We placed ourselves on the eastern edge adjacent to the heronry (known in the US as a rookery) and had a blast.


As mid-morning approached we explored the coastal swamp based on an eBird tip-off for Seaside Sparrow, and then birded the area near the reserve headquarters. Another shallow pool here had a Solitary Sandpiper and an unexpected Wilson's Phalarope, albeit rather distant. Black Duck paddled by, and the surface of the water mirrored numerous Tree and Northern Rough-winged Swallows. A small stand of trees known as Jackson Woodlot held a Golden-winged Warbler and several Yellow-rumped Warblers, and a Scissor-tailed Flycatcher hunted along a fenceline. Back at the buildings at least three Common Nighthawk were roosting in the trees and Cliff Swallows nesting under the pillars.


Rather than spend the afternoon at High Island we went a little further and drove around to Sabine Woods. As the crow flies this is barely any distance from High Island, but you cannot get into McFaddin NWR from the western side. Instead it is about an hour around via the rather desolate and post-dystopian Port Arthur. Despite seemingly close to ideal conditions, there was no large fall of songbirds at Sabine, but we did see a load more warblers - Blue-winged, Black-throated Blue, Blackburnian and more. Philadelphia Vireo was seen in the trees, and at the drips we were entertained by Wood Thrush, Swainson's Thrush, Brown Thrasher.

Whilst over on this side we also checked out Sea Rim State Park beach, which had Least Sandpiper, Sanderling, Dunlin, Sandwich and Royal Terns amongst others, before returning for dusk to the woods. As had been the case in High Island the activity really picked up as the day ended, and birds that had previously remained hidden came out for a pre-roost bathe and drink, including a Great Crested Flycatcher. It had been a good day, improved even more by a nice meal and a beer on the way back to Winnie.


Posted by Jonathan Lethbridge at 12:12 No comments:

I am 44 years old and I have just discovered the incredible utility of a jacket. Pockets. I am converted. Having never worn a jacket in anger before (the back of my chair wears my suit jackets and has done for years) I decided I was grown up enough to wear a casual jacket and took the plunge last weekend. I believe it is called sartorial elegance. Or being a big fuddy duddy. Anyway, a side benefit to looking debonair was all of sudden finding I had loads of pockets with nothing in them. Wow! Up until now I just stuffed everything into my trouser pockets - keys, coins, pen, phone, cards etc. Far too much, sometimes uncomfortably so. This is far better, it is much easier to find stuff, no digging around, and my trouser pockets can just have my hands in as I stroll jauntily along. Muscle memory keeps returning my phone to my left trouser pocket, but in time will that pass.

It is going to take some getting used to but I will keep trying. It suppose it will concentrate the mind when I leave the house without it and suddenly discover I have none of the stuff I need any more. Especially if that includes keys. The trial run was in Helsinki on Saturday, and very good it was too. Or at least for a couple of hours until I spilled a grilled shrimp down it which mostly ruined the effect. Might invest in a bib next. 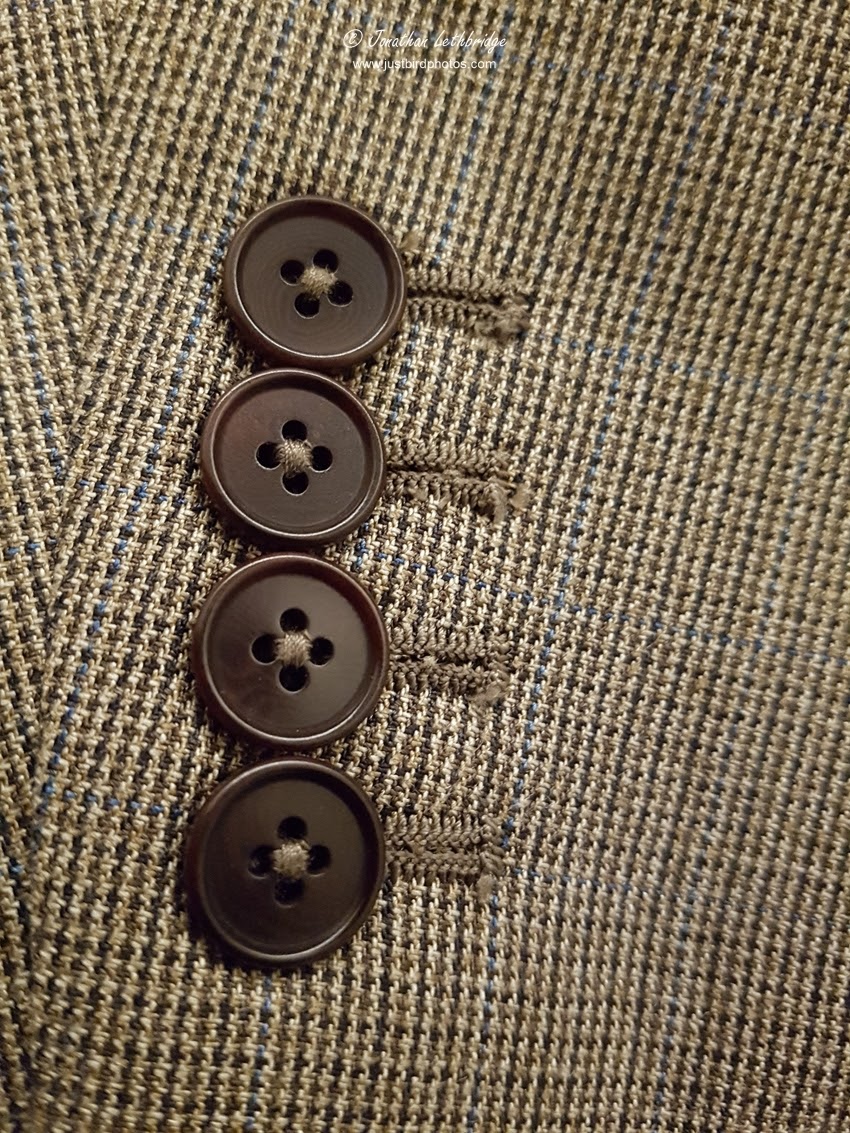 Posted by Jonathan Lethbridge at 21:51 2 comments:

It's just a phase

I last went birding locally in about mid-May. I realise that this is poor, but I have felt absolutely no compunction to go out. I am not sure I have missed a great deal in listing terms, but I have definitely missed out on the inner calm that birding brings, that feeling of connection with a local patch, that it is "yours" and you know it so intimately. I am not worried, the desire to reacquaint myself with its highways and byways will surely come again and I will find, as I always do, that I have not forgotten it at all and that pleasingly nothing has changed. This is typical of a long-term relationship with an area, be it green or urban. I get it when I revisit my childhood haunts; various parts of Cambridge, the village and countryside where my grandparents lived in Sussex, other places with which I have a long association. Years can pass but when I am at one of these places it is as if it were only yesterday. I have been here before and I will be here again, mentally and physically.

But as you know I have other pursuits, other ways of maintaining my inner calm, an art long mastered. That is not to say that there has been zero birding. I have enjoyed all that I have seen from the garden for instance, screaming Swifts are daily, and last weekend whilst watching the girls play cricket a Hobby cut curves out of the sky. That same day I even managed to twitch a Ring-necked Duck in the Lea Valley and saw my first Common Terns of the year.

Anyway, to all those of you who sometimes worry that you are phasing and that this is terrible, it isn't. It is perfectly normal and nothing to be concerned about at all. Everything you once thought you loved, birding included, will return. It is there, dormant, waiting to bubble up once more.
Posted by Jonathan Lethbridge at 07:08 5 comments:

After a quick breakfast at the 24h Waffle House over the road from our hotel in Winnie we made the 20 minute drive south to High Island. First stop was the much-lauded Smith Oaks Sanctuary. This is actually quite a large reserve, with a big heronry as well as woodland and drips. Despite the southerly winds it was not exactly heaving with birds, but we had excellent views of Rose-breasted Grosbeak, Cedar Waxwing and a smart male Scarlet Tanager before we had even left the car park. We paid the small entrance fee which covered us for all of the Audubon reserves for the day, and eagerly headed out into the woods. It was surprisingly quiet under the tree cover, but I picked out my first Blackpoll Warbler quite quickly. Catbirds were everywhere, easily the dominant bird – very pleased I did not schlep to Cornwall last year to see the vagrant!


We spent a pleasant morning here walking around, including looking at the heronry which was heaving with Snowy and Great White Egrets, Ibises and Roseate Spoonbill. A Green Heron flew across the lake, but the photography opportunities were slim due to the orientation of the raised bund. It would be better in the late afternoon but it also appeared that the golden hour wouldn’t happen here due to the height of the trees alongside the water. We continued to rack up bird species everywhere we looked – Cardinal, Baltimore Oriole, various hirudines and warblers, and then Indigo Buntings out in the field near the car park. Mostly however it was a massive warblerfest.

Wanting to see what other options existed, we relocated the short distance to Boy Scout Woods mid morning. This was a lot busier with people, but also had a lot more birds. Here we racked up Black and White Warbler, Cerulean Warbler, Northern Parula, Black-throated Green Warbler, American Redstart, Yellow Warbler, Tennessee Warbler, Northern Waterthrush, Swainson’s Thrush and Blue Grosbeak. We ended up spending the rest of the day here. As we left I was lucky enough to see a Mississippi Kite flying north. It had been a shattering day, and very hard work behind the camera, but we had really sussed out the location and knew better how to approach it in the following days. High ISO basically!!


Posted by Jonathan Lethbridge at 21:47 No comments: