Once again I invite you to take a trip on the roller-coaster that is my birding life. As the title suggests, this time it is good news.

True to my word, this morning I was out on the Flats at dawn, all of yesterday's nonsense forgotten. I was birding, I had found a Wheatear, and I was having fun. Wryneck score zero, but nevermind. I found a very interesting dumpy and large-looking warbler in an elder which promptly disappeared, but this did not deter me in any way from thinking what a nice morning it was. I noted Nick wandering up the path, and noted Betsy charging through the protected Skylark habitat. All was well with the world. We (that's Nick & I, rather than Betsy & I) chewed the fat for a bit, mulled over yesterday's extraordinary events, and then all too soon it was time for me to go.

Around 9ish, as I was on the school run, my phone went. An involuntary "Nooooooooooooh!" escaped my lips - and this is before I had even answered it. As expected, Nick had refound the Wryneck, this time down near Alex. Sensing a repeat of yesterday's trials, I asked him to stay with it and beat any dogs and dog-walkers to death with his tripod if they looked like coming close.

Thankfully this wasn't required, or not that he mentioned anyway, and after completing a rather fraught dumping of children, Pudding and I made our way to the Flats. As I approached I could see Nick, Paul F and Tim peering intently at a Hawthorn. Could it be true?!

It was! I pitched up, and there it was in a scope. Sensational! I've dipped more Wrynecks than I have seen, so to get a second bite at the cherry this morning and to actually succeed was very unexpected. As I said yesterday, a dream bird for the patch, and an amazing relief. We watched it for about two hours, and all of yesterdays dippers returned and managed to see it as well, including Paul W, and also Dom, who managed to see it within about ten seconds of arriving and thus had time to pop over to Long Wood. I think that's what he said, although possibly it was more along the lines of he was never going near Long Wood again. Can't remember. Anyway, we all enjoyed excellent views as it fed on and around the numerous ant-hills that dot this area of the Flats. I returned home to get my camera, and the bird promptly disappeared. Luckily Paul F was more prepared, and has sent me this. 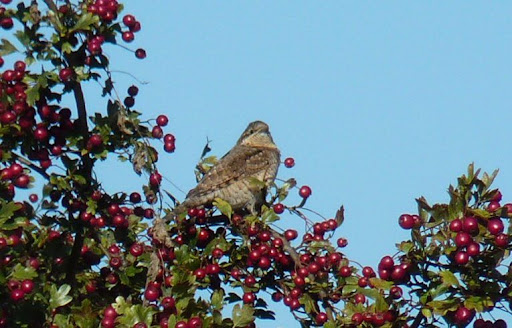 What a little stunner!!

What will tomorrow bring I wonder? It almost doesn't bear thinking about - I should probably start popping the pills now!

Posted by Jonathan Lethbridge at 12:34