Her owner on the other hand can read. Or is presumed to be able to read. There are many signs on Wanstead Flats asking dog-owners to keep their dogs on leads whilst traversing the grassy areas. Betsy's owner ignored the signs, which meant that Betsy nearly caught a Skylark. Betsy's owner is selfish, stupid, vacuous and ignorant, kids. Children, what would you say to her if you saw her letting Betsy run through the Skylark's home?

This is Toto. Toto is a Pomeranian. Toto is also a ve-ry naugh-ty dog. This morning, Toto tried to bite my left ankle. Luckily years of inbreeding have rendered the jaws of a Pomeranian so pitifully weak as to be unable to penetrate denim, else I may have a neat semi-circle of puncture wounds. Children, I confess I may have uttered a naughty word. 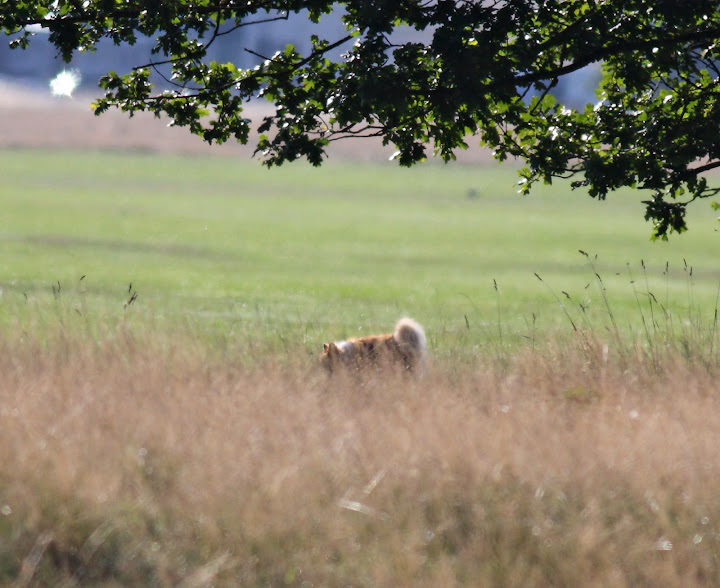 I gently nudged Toto to one side using my boot, and remonstrated with Toto's owner.

Toto's owner is rude, ineffectual, stupid and vacuous, kids. She is unable to keep her dog under control, and was unable to offer any kind of apology for its actions. In fact, as I examined my ankle, she just walked off with Toto trotting beside her. Toto should be on a lead and muzzled, or perhaps just euthanized. What would you say to her, children, if you saw Toto bite someone? Remember, no naughty words now....

Posted by Jonathan Lethbridge at 09:29