Have I ever mentioned how much I hate Blakeney Point? I say hate, I think I mean loathe. If you're not a birder, Blakeney Point is a four mile long shingle spit in North Norfolk, running east to west. If you're a birder, it's still a four mile long shingle point in North Norfolk running east to west. - the difference is that at some point you'll have to walk down it. This is known as "walking the Point". Like walking the plank, but worse. Rare birds have a disappointing tendency to appear right at the end of  Blakeney Point, and if you want to see it, or give yourself a chance of seeing it, you have to trudge down it. And, as I mentioned, it's shingle. Which means that for every normal step you would take on terra firma, you need to take about three on Blakeney Point. It is agonising.

There are regulars points of interest to keep you focussed, to keep you from falling on your knees in the shingle, curling up and dying. You can always see the next landmark. The first is known as Half-way house, for obvious reasons. I personally think it isn't even half-way, but the glass is always half-empty I suppose. Then there is the Hood, a kind of spit pointing south into Blakeney Channel. Rare birds do turn up here, but the best ones are always further on. A little further on, but still across another few-thousand miles of shingle, you get some substantial dunes, and the Point widens. Here you can take a firmer track to a small stand of stunted trees, perhaps half the size of a tennis court, known as the Plantation. Another mile or so beyond that is an area known as Far Point. I've never been that far, so I can't tell you about it. As far as I'm concerned, it is uncharted territory. I think there might be a Dragon colony.

I've walked down Blakeney Point a few times, but only ever on spec. You'll have heard me whinge about Norfolk letting me down more than a few times, when promising conditions deliver no birds. There is nothing worse than walking Blakeney Point and finding no birds, and then having to walk back again. It's three miles to the Plantation, but about fifty back. Your boots each seem to weigh a ton, every step becomes increasingly difficult. You get to the Hood fairly rapidly, and in the distance you can see Half-way house. Another four hours and you're there, but then comes the worst bit. For a long time you can't see anything. There are no landmarks, just never-ending shingle. After about twenty miles, you think you can see the roof of Cley Coastguards, a brick structure in the beach car-park. By this point you could easily be hallucinating though. You look again and see nothing. Another ten miles or so and it begins to resolve itself. Yes! There is a building! The next day, or perhaps the day after, you finally stagger to your car, vowing never, ever again will you "walk the Point". 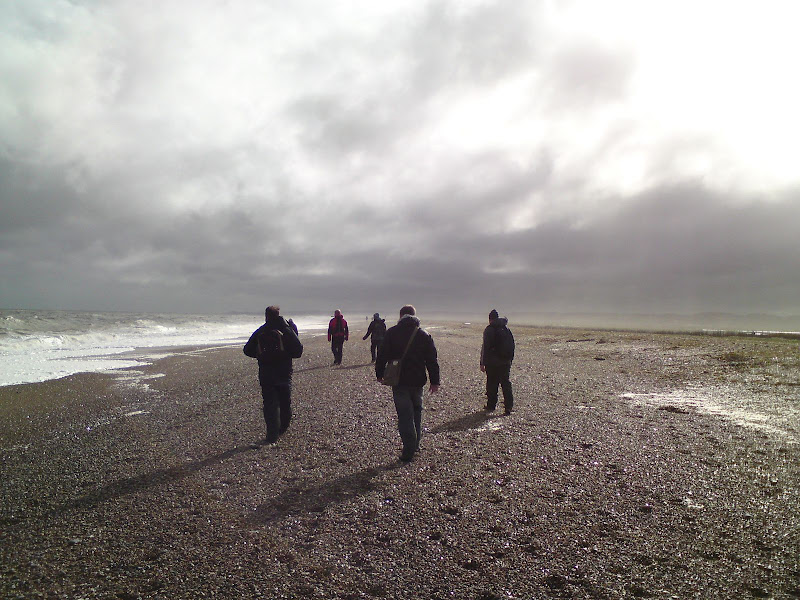 The best bird I've seen on the Point is a Redstart. On Saturday, Britain's first ever Yellow-bellied Flycatcher turned up on the Point. Or perhaps Britain's first Least Flycatcher. Or maybe a Willow Flycatcher, also a first. Then again, it could be a boring old Alder Flycatcher, just a second for Britain. Nobody cared, they were all going to see it anyway. The point is that the little sod decided to drop into the Plantation.

At six in the morning on Sunday, five of us were in Cley beach carpark in the dark. We were not alone. Off into the distance, illuminated by the luminescence of the froth on the sea, a line of birders stretched along the Point, all trudging in one direction. West, to the Plantation. The wind was howling, spume flew through the air like snow, and salt-spray covered us as soon as we got out of the car. I very nearly had second thoughts. A massive gamble, would the bird still be there, or would I be walking the Point yet again for no reward?

On arrival three days later, it didn't look good. The Plantation was surrounded by glum-looking birders. I collapsed on the ground next to Paul W, cursing my stupidity. The Plantation does not have a good reputation for holding birds. Nothing moved; The Plantation was dead.
Half an hour later, some movement. Paul's bins were up in a flash, and he confidently declared that he "had it". Birders flocked (naturally) to him, but it had vanished. Then another guy saw it, and people rushed towards him. Then Howard and another birder heard a funny call and found a Little Bunting, and everyone rushed to see that. Including me, obviously. In fact, I think I got there first, and got a great view of it, thus allowing me to erase a "bvd" next to Little Bunting on my list.
Back to the Flycatcher, and though extremely elusive in the 200mph winds, I evetually got excellent views, allowing me to confirm it as an Alder Flycatcher beyond doubt. I know it is an Alder because that's the only one that I'm able to select in Bubo-listing. That and the fact that having walked the point in the dark in a gale, there is no way I am accepting some kind of indeterminate Empidonax sp that won't be accepted to species and that I therefore can't tick. No, it goes down as Alder. Anyway, this strikes me as the most conservative thing to do because it would be the second record, whereas all the other options would be national firsts. I am erring on the side of caution, like any sensible, considered and tick-hungry birder. Traill's? Never heard of it.
The walk back was hellish. It took days. Mentally, I'm still out there somewhere. A wreck, I arrived back at the car and vowed never again. Still, tick and run hobble.

The walk back. Howard took this video, don't be scared.

Back in London for a late lunch, I could easily have just gone to sleep until next weekend. Instead I decided that I would go to Rainham for a Gannet. On Saturday the skies of London had been darkened by thick clouds of Gannets, including one over Wanstead. I'd been busy so had seen none of them, which was a great shame as just one would have been my 200th bird in London this year and an LNHS recording area tick for good measure. So off I went to Rainham hoping the same would happen again. To enhance my chances, I took Wanstead's golden boy Nick with me, to act as some kind of lucky charm.
And naturally, ten minutes after we arrived, a Gannet flew past. #200. Played for and got.
Posted by Jonathan Lethbridge at 10:50