Forgive the Sun headline, but I am still in shock. At home being VERY domestic, my phone rang - it was Paul W, rapidly becoming a top wind-up merchant. "Manx Shearwater at Rainham" Eh? The last time he rang it was with news of a White-tailed Plover. I didn't believe him then, and despite a mega-coincidence of one then turning up, I struggled to believe him today.

But yet again he wasn't winding me up, it was true! Puffin(us) Hell! In my desperation to get to 200, frankly you could tell me anything and I'd probably believe it eventually. I'm not sure which I drove faster to, the Plover, or today's Manx. It doesn't really matter, both were highly naughty. Allegedly.

On the old Sea-wall a small huddle of people were stood. Andy T, the finder, who had happened to glance at the river at a very opportune moment, got his scope lined up, my head slotted into position, and there it was, having a rather nasty time of it on the river. If you are a small sea-bird, a bay next to a rubbish tip with a large assortment of loafing larids is a very bad place to be. I genuinely feared for its life for about twenty minutes, before the gulls gave up and let it drift down the river. A Rainham, London and Essex tick, and a pretty astonishing one at that. I willed it to fly away! Er, I mean, I willed it to stick around - and not get eaten. 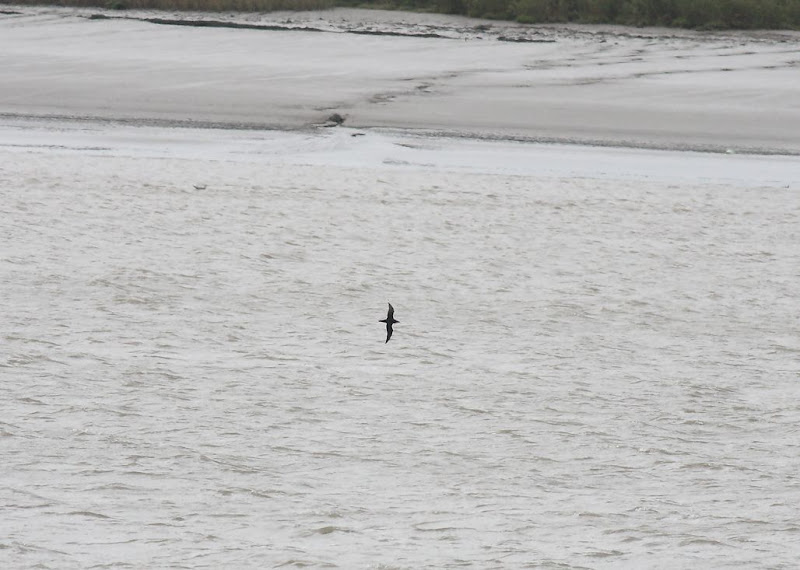 I thought it would be a 'tick and run' bird, but it was still there three hours after turning up. Shearing up the river, then drifting back down, and no doubt causing some nervousness amongst employed London Listers. Sunset is at 7:15pm, in case anyone is wondering.

Posted by Jonathan Lethbridge at 14:55