A frustrating day today attempting to get Wryneck (gah!) and Osprey onto my London year-list. Neither happened, but I did miss an Osprey by five minutes at Amwell. Many thanks to my faithful chauffeurs Paul and Dom (drive faster next time, please), but clearly I used up all my luck yesterday and it was not to be. Birding can be like that sometimes, I've had days today before, and no doubt I'll have them again. If everything was there, waiting for you, it wouldn't be fun, right?

The notable incidents today had to do with security rather than birds. Dom had kindly dropped me off at a tube station in London after our abortive Osprey-watch, and I had managed to make it as far as Whipp's Cross Hospital. Whilst waiting for Mrs L and the kids to [lovingly] pick me up, I noticed a Magpie perching up quite nicely. I had the camera, and being at a loose end, got it out and started my approach. I had got half way when security appeared. Did I have permission to use a camera in the hospital? Well no, I didn't, but seeing as I was photographing a Magpie, I saw no need. But the buildings were in the background! I acknowledged the undeniable truth of this statement, and started taking photographs. 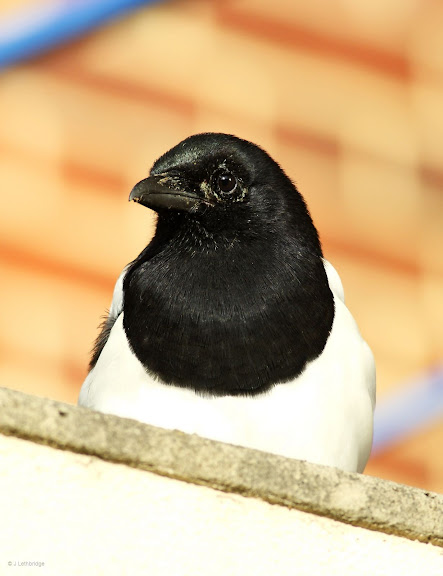 I was asked to stop, which I didn't. Honestly. Instead I asked Security whether they had anything better to do as I was taking photographs of a bird, not of patients, not of doctors, not of anything remotely sensitive. A phone conversation with a supervisor then ensued, which was a welcome relief and allowed me to correct for the +1 2/3 exposure compensation I had unwittingly dialled in from a Hobby in the sky at Amwell. I continued snapping, and then Mrs L arrived, wondering why there were men in day-glo jackets converging on me. Why do security people always take things far too seriously? Why can't they concentrate on actual security issues rather than trivia? Frankly I'll take photographs of birds wherever I damn well please, including in NHS hosital grounds that my taxes [used to] pay for. I got in the car, and we went home, where I discovered that perhaps security people had a use after all.

Keys in hand, I approached our front door to find it wide open. Eh? I walked in, expecting burglars stuffing lenses in their pockets. Nothing. Camera bag on the sofa where I had left it, TV still in place. What the...?

"Mrs L?", I enquired, "did you perhaps just walk out of the door, get into the car, and drive to Whipp's Cross?"

"Errr..." came the admission of guilt from Mrs L.

Unbelievable. So dear readers, if any of you fancy a new camera, some bird guides, or a multitude of un-opened cleaning supplies, just come round and help yourselves. My door is always open..... However you will need to get round the Whipp's Cross security personnel, who, on the basis that they perform no useful function at Whipp's, are now patrolling outside my house instead so that Mrs L need not be distracted with the complications of keys and shutting doors.