A north sea northerly with gusts rising to 50mph all Friday night and all of Saturday. Frequent squalls, poor visibility. Seabirds galore, it was too good an opportunity to miss. Similar conditions in September 2009 had enticed/forced 800+ Manx Shearwaters past Sheringham, along with numerous Sooty Shearwater, Sabine's Gull, a Leach's Storm Petrel and tons of Skuas. Time has not dulled that day, and I wanted a repeat. I'm over ten years older though, so a hugely early start was off the cards, and in any event the theory was that the birds wouldn't move overnight and instead enjoy a bumpy sleep somewhere out in the open sea. The following morning they would yawn, stretch their wings and immediately be blown inshore where lots of people would be waiting.

It hadn't work out quite like that. By the time Nick and I arrived at the shelters to meet Bradders people who had been there since dawn were bemoaning the initial three hours. Waste of time, completely useless said one famous birder as he walked away, no doubt imploring us not to bother. Always a risk leaving a seawatch, even a poor one. The collected crowd of perhaps sixty had enjoyed a first hour of decent Skua passage but were now experiencing the mid-morning dry up. They left in their droves, and by 10.30am there was room in the shelter below and we settled in to dry off. A LT Skua was called down the line before I had even sat down, but if we were expecting more we were to be disappointed. But with the weather as it was there was no alternative but to continue the seawatch.

One word. Slow. Ve-r-r-r-y slow indeed. People out for a walk laughed at us as they passed. Approaching 5pm we said we would leave at 5.15 - a solid but ultimately eight hour long damp squib. At about 5.05pm a rush of Arctic and Great Skuas in all directions threw a spanner in the works. In for a penny in for a pound; we were forced to stay. In those final two hours we probably saw more than in the preceding eight. It raised a poor seawatch into an average one. Not in any way comparable to the magic of 2009, but one that nonetheless has an air of quiet and bloody-minded satisfaction.

The following list does not exactly scream ten hours of hard graft at me, but it was sufficiently different from my normal birding that I'll take it. What would I have done at home other than see the same Whinchats that were here on Friday? I am still scratching my head as to why it simply didn't deliver. I am no seawatching expert, I think I will just have to put it down to experience. No doubt the shelters at Sheringham will be full again today, populated by weathered birders who know that a big blow always produces reorienting birds the following day despite blue skies and miles of visibility. There is always next time. 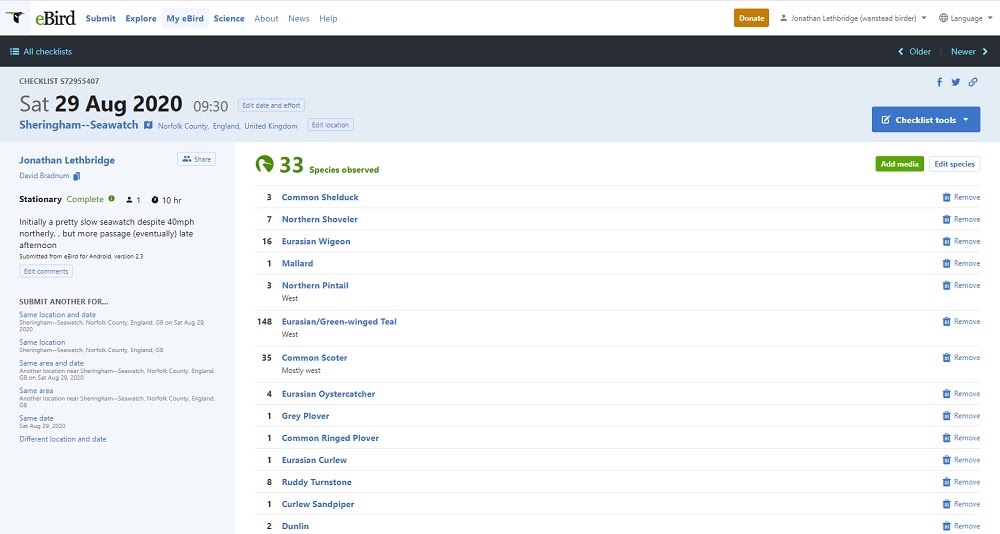 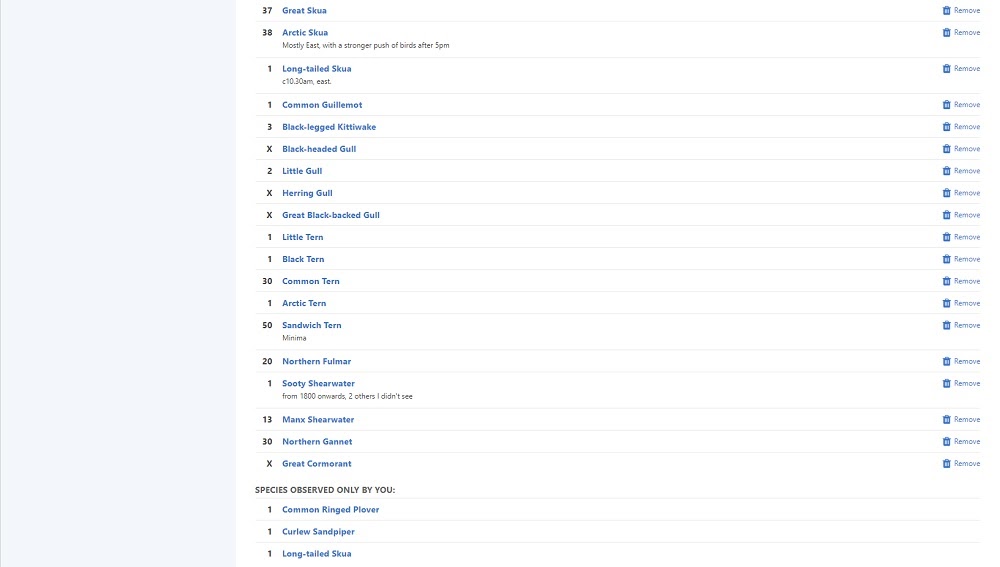 Posted by Jonathan Lethbridge at 11:04