Birder's photo vs Bird photo? A Whinchat provides an example.

There has been a bit of debate recently about the preponderance of super-detailed rictal bristle bird photographs on the internet. It is to be expected, photographic gear gets ever better, with seemingly tiny cameras capable of taking simply wonderful shots. The fancy technology of just two or three years ago is now found in budget cameras and megapixels abound - a starter camera is now around 24mp and some of the amateur bodies are bumping up to 30mp+, approaching 7000 pixels horizontally. That is a lot of pixels, there is almost no excuse not to take outrageously detailed images.

But in the face of this detail that reduces birds to objects of photographic lust rather than as creatures as part of, or moving through a landscape, there is a quiet backlash. The birder's photo. Birders care not for rictal bristles. Rather they want to show the bird as they themselves experienced it. Where was it? What was it doing? Which bush was it in? This has some merit.

Recently I have been birding Wanstead Flats a great deal. Short targeted visits rather than all day vigils, but often several times a day. Until this morning none of my forays included a camera. But that is OK as phones these days are pretty incredible. Mine is a Samsung and has a 16mp camera in it which I find almost unbelievable as up until two years my DSLR only had 16mp, and even the one I have today is only 18mp. Canon's latest offering, the EOS R5, has a staggering 45mp. It also costs an equally staggering £4200, so I think I'll pass. I'd only break it. Anwyay, it has been very refreshing to be out birding without a camera, particularly one as heavy and unwieldy as mine - a bridge camera it is not. In fact recently I would estimate that nine times out of ten I will just have had my bins. I must be getting old. So, as I say I have been out a lot and there have been birds everywhere. Tasty and inviting birds like Whinchats and Wheatears. Sometimes there have been several of each in the same bush - on Monday a Redstart, three Wheatear and a Whitethroat, or like yesterday, two Wheatear and two Whinchat. I nearly wished I had had my camera with me, but then I realised that actually it was fine as I could instead take a birder's shot with my phone. So here is the bush of dreams from yesterday.

A real sense of place I feel. Evocative, with Centre Road car park in the background and a couple of nice lamp posts. Mmmmmm-mmmmmmm. Yep, that is my kind of photo. It will help me remember the excursion, it will add an extra dimension to my birding in a way that other more vulgar types of photos cannot. To prove this I took my camera out this morning and pointed it at the first Whinchat I saw. Ugh. 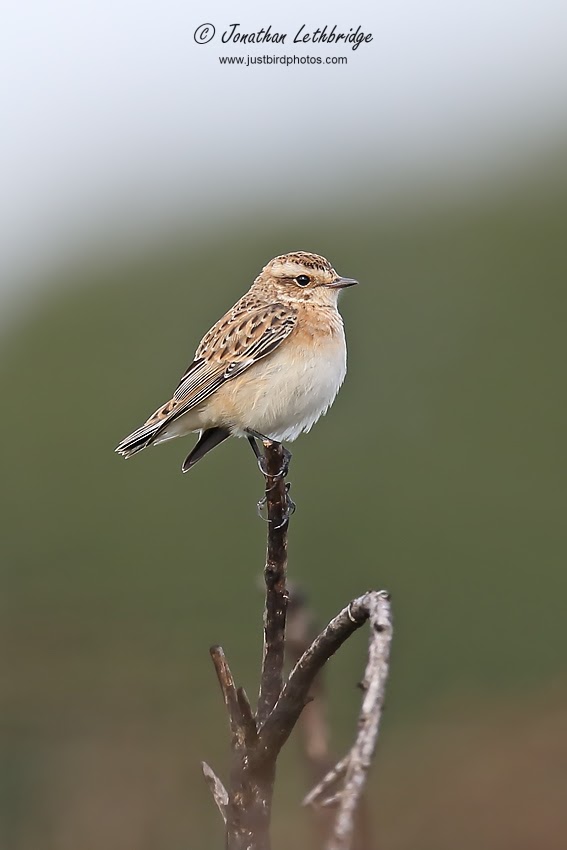 Luckily it is not great as the bird was quite distant and I was in a hurry, and following an unfortunate Windows 10 experience my most sophisticated image-processing software is currently MS Paint. But nonetheless there is still way too much feather detail and the fundamental problem is that you can still tell it is a Whinchat. There are also no cars in the background to provide any sense of scale or of place. And can you see any lamp posts? Exactly. Mind you it is nothing compared to this horror show which I took in Greece a few years ago. Jeeee-sus wept, remind me never go anywhere near Lake Kerkini again. No contest is there? Ebay it is then. Posted by Jonathan Lethbridge at 18:03