Mobile recording - a message from the drawing board

A few days ago marked the first outing for my mobile recording set up whilst out and about. It also marked the last, at least in its current form. Hopeless. I had attached it via a special belt buckle that I had lying around, and then used a lanyard as a safety line in case the first connection somehow failed. Here it is in situ. 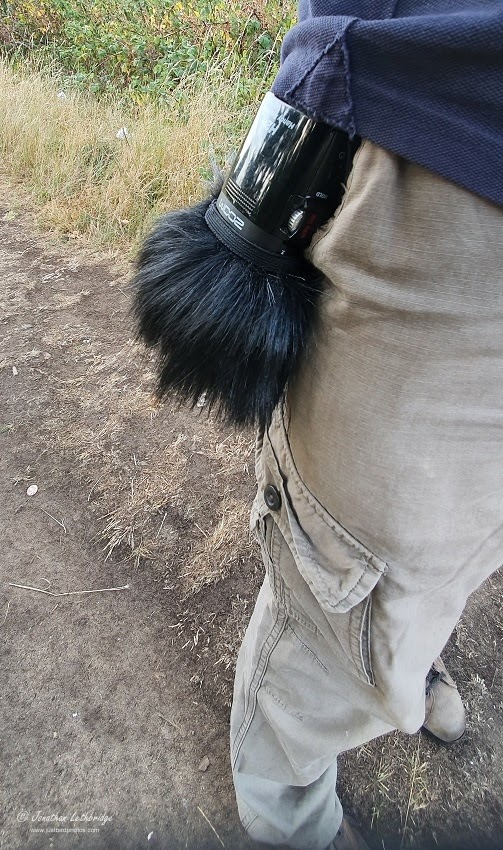 And here is what it records.

My leg basically. What you can see here is the graphic representation of "whump whump whump whump" as the recorder gets wacked by my leg and, pointing downwards, also records my footsteps for good measure. So, back to the drawing board.

The first step is going to be to move the device from my leg. It needs to be on a part of me that does not move, or at the very least does not move nearly as much. And I think that it also needs to be pointing upwards, which I probably could have guessed. Saying that it does pick up bird sounds quite well when I am standing still, so it would probably work during vizmig when I am typically immobile, but the scenario where I am on the move and hear that single call is one I want to be in with a chance of winning.

I think I need to mount it higher up, either on my chest or on my back, perhaps simply a large safety pin on my lapel or on my shoulder, or on my upper arm a bit like where people have their phones whilst out jogging, though no doubt the swish of clothing and so on would be a problem. Maybe the solution is to use my external microphone. I could strap it to the side of my head like an antenna and then walk in small circles around the vizmig post. Yes, that could well be it. Excellent.