This could well be a very long and drawn-out post. I have been away for a week, and am suffering from Blog deprivation. I have also seen several boat-loads of birds, and taken a couple of photos, which I will of course subject you to throughout this post.

So where has famille Lethbridge been I hear you ask? I would imagine that the top photo is a bit of a giveaway, and in any event, as previously discussed, most readers of this know me anyway and I have been texting them all week... I'll give you a clue - it wasn't Wanstead. Regular readers will not have needed that clue, as of course I am never actually in Wanstead. Still no idea? OK, for the benefit of the random (and unfortunate) visitor, I can reveal that we have been to Scotland, and jolly nice it was too. 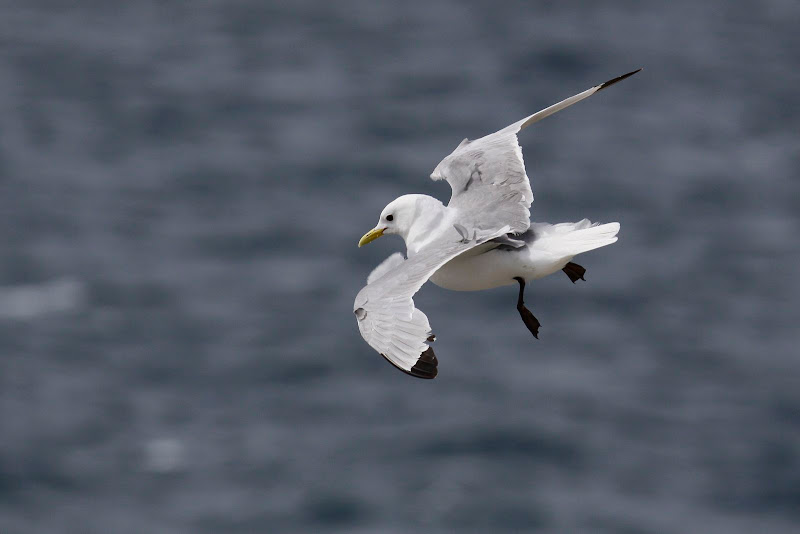 We go to Scotland pretty frequently, but this trip was particularly complex. Mrs L and my eldest cycled there (from Newcastle, but still an impressive achievement). Middle Kid flew there with her Grandparents a few days later. I stayed put for another few days, twitched a Cuckoo, and eventually drove up with the youngest and all our crap. Cue a happy reunion in Fife when we eventually made it. 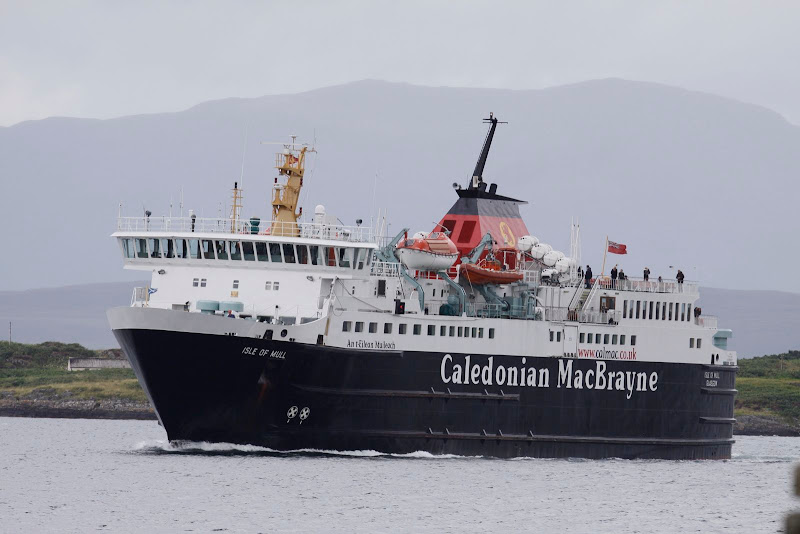 My parents came up with the genius suggestion that Mrs L and I spend some time together, and that they would look after the kids to facilitate this. "Excellent idea", I said, we shall go to Mull, childless, just like we did ten years ago, and camp in that same spot, more of which later. Calmac tickets were duly purchased and off we went. The drive was superb, by which I mean stunning scenery through the Trossachs was complemented by no less than 4 Ospreys and a Peregrine. At Oban harbour they had a peculiar species of pigeon, much more attractive than the ones that live around Jubilee pond here on the Flats. The pigeons are slightly odd in that they have a semi-aquatic habit, but just like regular pigeons they were very tame, so I spent some time taking a few photos as they strutted along the harbour wall cooing gently. 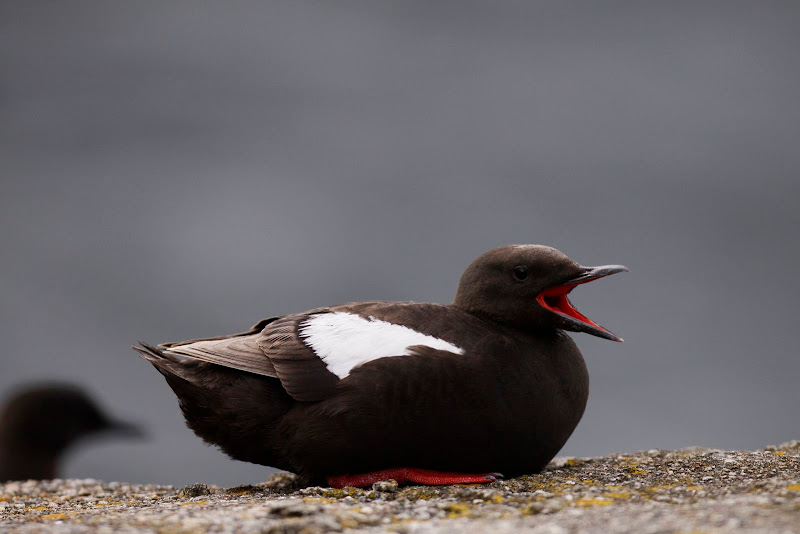 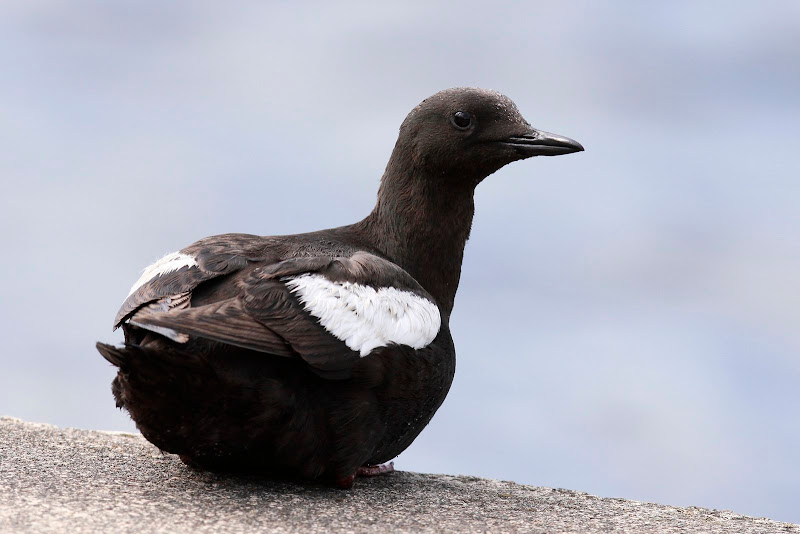 A sea-watch from the ferry did not produce the hoped-for Fea's Petrel, but no matter, as soon as we docked we headed straight for Loch Frisa which is where the RSPB is all set up to show punters Sea Eagles. Two punters came away happy with a nice adult Sea Eagle (though we had to give it back later as apparently they are quite rare). We also saw 2 Golden Eagles and a male Hen Harrier. The other visitors didn't see these, as, to a man, they were all muppets.

"Let's go to Caliach Point and stare at the sea!" What a turn on, and frankly how could she refuse? I promised her that we might see some Great Skuas, which would be a tick for her. I imagined getting her onto a distant dark blob and saying "Look, isn't it fantastic?!" In the event the views were ever so slightly better than I was expecting. A nice way to get a tick (although she would like me to point out that it can't be a tick because she doesn't have a list. Right.) 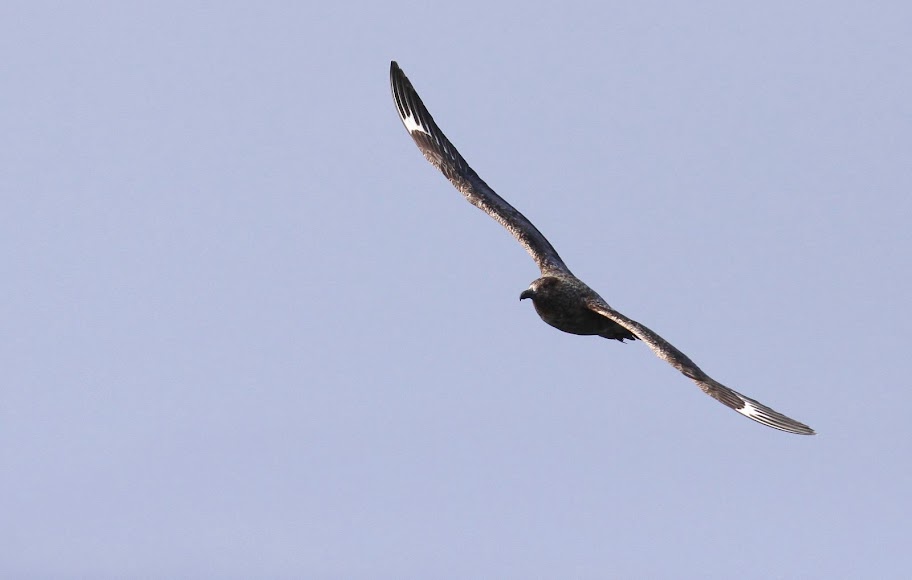 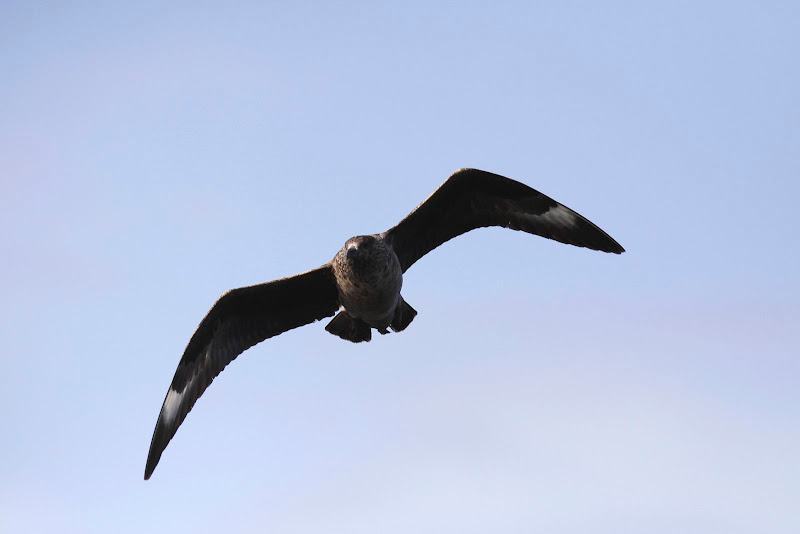 I also got quite excited when I saw a Black-browed Albatross fly past. Mrs L thought I might fall off the cliff I became so animated. Sadly all my photos of this magnificent seabird show a juvenile Gannet, so the less said about it the better. I know, how on earth could I have photographed the wrong bird? Rookie error if ever I made one. Dammit.

Despite the intervening years, we found the camping spot with no trouble at all. At some point in the last decade some unhelpful person or persons had blocked the convenient parking space with a row of rocks, but these were easily shifted. Put simply, it is the best place to camp in the Northern hemisphere. In idyllic scenery, you look out for a stone bridge after a bend in the road. Just upstream of the bridge is a waterfall and a pool. Once you have shifted any offending geography out of the way of your vehicle, proceed with camping gear over the road and downstream, past another waterfall, and set up at a grassy dell next to another pool. Have a nice meal cooked for you, and then proceed downstream to the cliff edge where the stream falls 50ft into the sea, and enjoy the sun setting over Loch Tuath and the distant Treshnish Isles. Drink Whisky. It is simply wonderful. 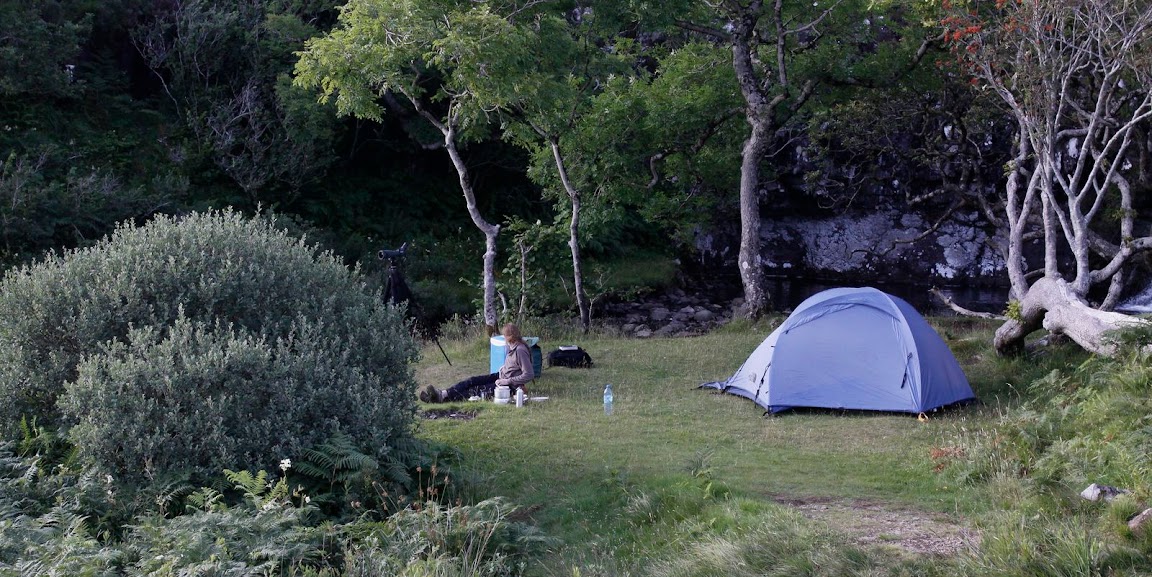 The next morning the wonderfulness was shattered by an SW3 type jogger who objected to our presence. I was loudly informed that I was not supposed to have parked there (which I already knew, but what harm was I doing exactly?) and that there was parking for "you lot" down the road. I didn't let her finish. "Us lot?" "Yes, you know, tourists, campers and so on". What she actually meant was "SCUM" but such was her breeding she couldn't quite bring herself to say it, so "you lot" was the next best thing. Obviously local herself, she took a photo of the car, and haughtily said she would call the police and the council if the rocks were not put back exactly as they were, , so I promised her it would all be fine and continued cooking breakfast. So keen was she that she took another photo of the car on her way back for good measure, so somewhere up on Mull my car is famous and no doubt the the whole of Argyll constabulary are on the lookout for it for the grave offence of moving a rock. As she jogged on I told her to to come back in half an hour and take another one, but I don't think she heard me. I hadn't shaved for a week, and employment is in the dim and distant past - if I see a rock that is in the way of my holiday, I am going to move it, and if some aristocratic old bat starts having a go she can piss off back to Chelsea where she belongs, and where there are parking meters instead of rocks. Mrs L got cross and said I shouldn't antagonise her, but honestly. Clearly too much time on her hands if she is worried about rock-placement. She needs a good hobby, like birding. 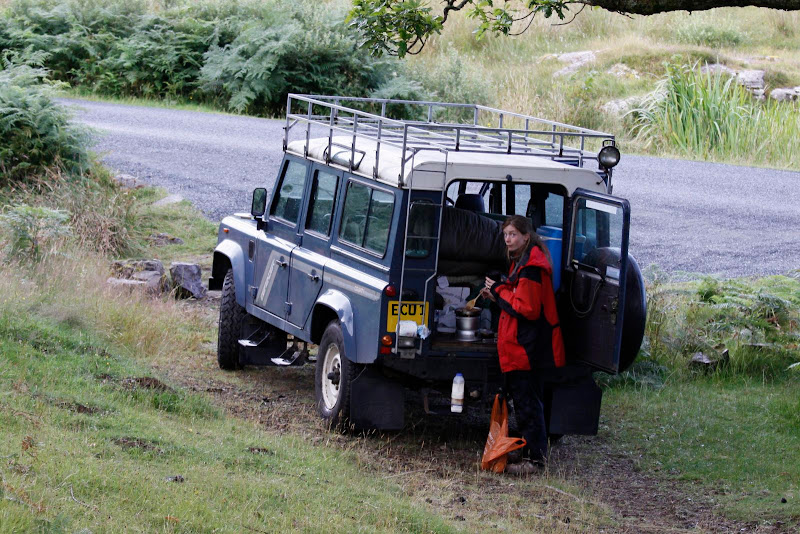 Funnily enough neither the police nor the council turned up, so after a hearty breakfast we continued past yet more fabulous scenery to Fhionnport to catch the boat to Iona. It is only a ten minute crossing (£2.05 pp each way, ker-ching). Mission Corncrake. I had done my research, and apparently a rasping male had been heard in the field next to the fire station. Most places in Iona are about two minutes from the ferry, so shortly after docking I was indeed listening to crex CREX crex CREX coming from somewhere close to the middle of the field. Can I tick it? Mixed opinions from London birders - hmmm, probably need to see it - not easy. Happily in the two hours I spent just looking at the field, I got two brief glimpses. The first was about 3 seconds in flight - rubbish dangly flight, would have been better off walking. The second view was of a Corncrake bum as it disappeared into a clump of grass. Mrs L was with me at this point, having elected not to bother with forking out a fiver to look at a boring old abbey, but didn't see it. But she did hear them - at least three in the field, so that is a semi-tick for her (if she had a list of course) 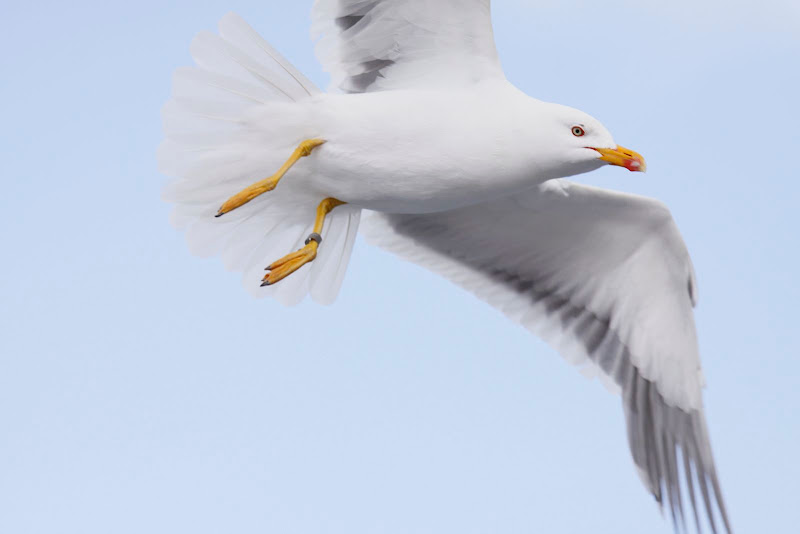 The brief trip produced 8 Osprey, 1 Peregrine, 2 Golden Eagle, 1 Sea Eagle, 2 Hen Harrier, 1 Merlin, 5 Kestrel and 1,767,434 Buzzard. Add in 2 Raven, 2 Bonxie, Hoodies, Siskins, Linnets, Eider, seals, a Basking Shark, and some friendly pigeons and you have an excellent trip. And it meets with wifal approval as well. Just make sure you park in the right place. 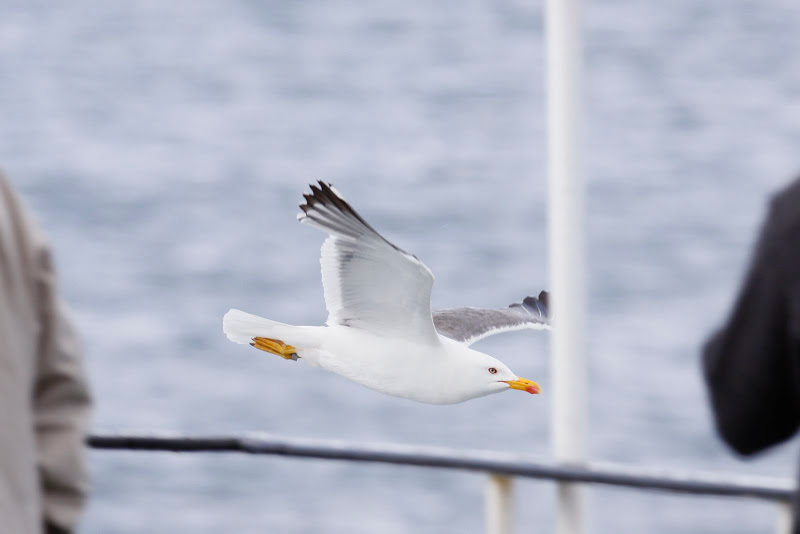 Not a lot else to tell really. The Isle of May was superb as ever, and an excellent day out with some of the family. I could take photos of puffins just about for ever I think. Loch Gelly came up trumps with a Ferruginous Duck and a Ring-necked Duck on the same day, which the kids enjoyed as the quality ticks they were. And I got up at stupid o'clock for a Fife Ness seawatch on the penultimate day which netted 61 Manxie, 2 pale morph adult Arctic Skua, 3 Great Skua, and thousands of Albatrosses... 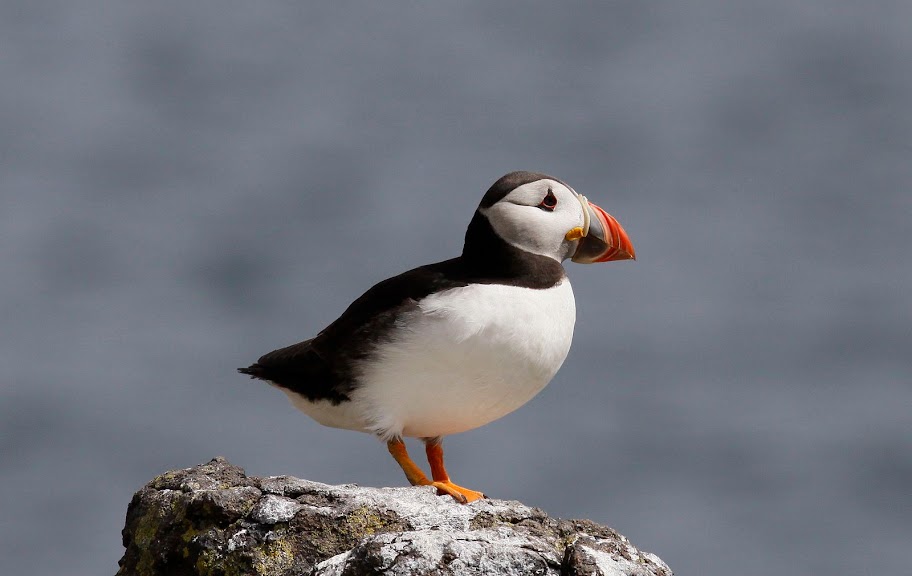 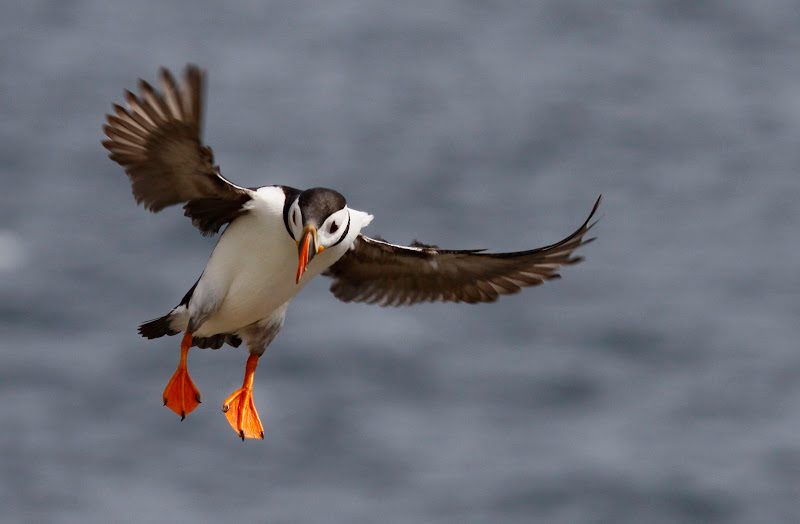 Posted by Jonathan Lethbridge at 15:16