Dear Readers, I have once again abandoned my patch, literally moments after getting a patch tick. In the interests of all-consuming-hobby-life-balance and continued family harmony, we have been on a short break to the Isle of Wight, land of the dotto train, the plastic windmill, and the stick of rock. And very lovely it was too, vast heaps of tackiness included. First and foremost, the kids loved it. And sat there in my plastic deckchair, in front of a peeling shed underneath a crumbling cliff, watching my offspring throw sand at each other and paddle in 6 inches of tepid water, I couldn't help feeling pretty happy with life.

Mrs L comes from the Isle of Wight, forthwith known as THE ISLAND, as there are no others. Her sister still lives there with her husband, kids and dog. We are started producing at the same time (and, by and large, frequency), so the cousins are the same age. Mayhem, but they all enjoyed it and that was the whole point.

On Friday I had a day off from family life, so birded Farlington Marshes in Hampshire. Superb place - many more waders than Wanstead. No Spotted Crakes, so very much like Wanstead. I can particularly recommend a bench on the eastern sea wall where I fell asleep for over an hour in the sunshine. Fortunately all my gear was still there when I woke up, including the tripod and scope which were on the path and pointing out at the mudflats. Perhaps heaps of people walked past it honestly, or perhaps nobody walked past it at all, no idea. A couple of Wheatears near The Deeps were the my first of the autumn, and I stuffed my face with blackberries. As I left, I was able to take a mean photo of a fearless Kestrel sat on a bin in the carpark, just recompense for lugging the camera all the way around the seawall twice and taking no photos at all. 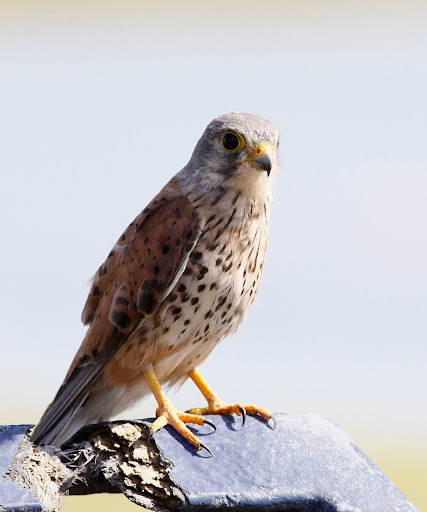 Saturday we took the boys fishing. This was Muffin's first fishing trip and I was somewhat nostalgic, recalling my first fishing outing many many years ago. I don't know how old I was, but my memories are very clear. It was in the Lake District, and we fished a tarn from a rowboat for Perch with one of my parent's friends. I still have the little 5ft rod from that day somewhere, but couldn't locate it for this trip which was a shame. Remarkably we caught some, we may even have eaten them. It was one of the highlights of my growing up - all small boys like fishing, sans exception. So it was with some gaeity in my step that Muffin, his cousin (an old hand), my b-in-l and I headed out of the house in the morning. The destination was a small carp lake only a few miles away and we had the place to ourselves. Two Green Sands took off as we approached the lake, and Raven cronked overhead. Difficult to compress 8 hours into a couple of sentences but here goes: We all caught some fish, including Muffin who was beyond ecstatic, if there is a word for that. My fish were really huge, my brother in law only caught tiddlers, how embarrassing. This is probably best conveyed by photographs. 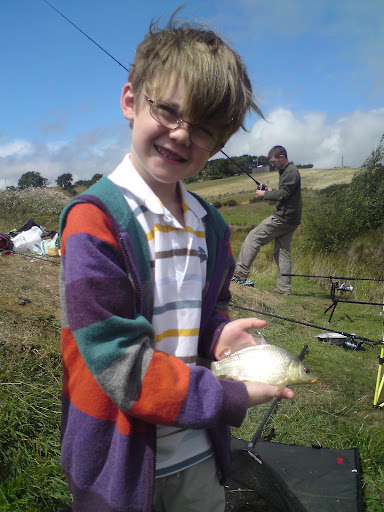 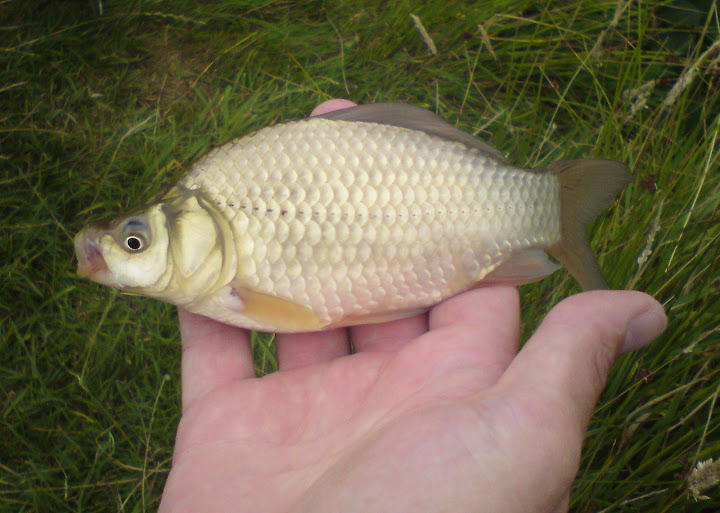 One of many (three) behemoths I caught 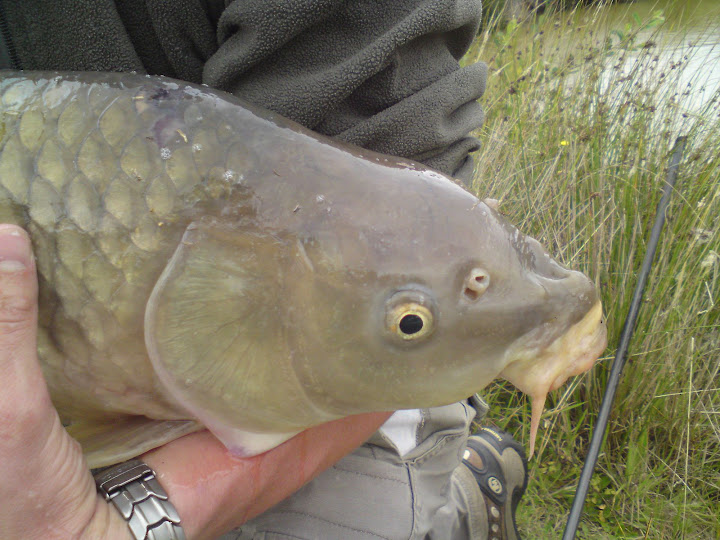 Sunday morning I went sea-watching from St Cath's Point. Beyond rubbish. Very few things in birding truly depress me, but getting up at 5am to see a Gannet is up there. After an hour I jacked it in - 112 Gannets, 3 Fulmar, and a GBB Gull. I am amazed I stuck it out that long, I knew within about 15 minutes that it was going to be terrible. Instead I checked Bonchurch Down for migrants, and scored big-time with an atypical showy Grasshopper Warbler. I figure this must be pretty good if one of the Island's most committed birders hasn't seen one this year, but sadly I only discovered this today once we were back home. I was trying to work out who I could send my Gannet sightings to, and found his website. Naturally I told him it showed really well.

Later that day we went to the beach, an excellent idea as it allowed me to have another sleep in the sun to recover from getting up at 5am again. The kids adore the beach. All five of them played with minimal parental involvement for about six hours. Fun on the cheap. I messed about taking photos of Black-headed Gulls, and, like them, generally loafed. 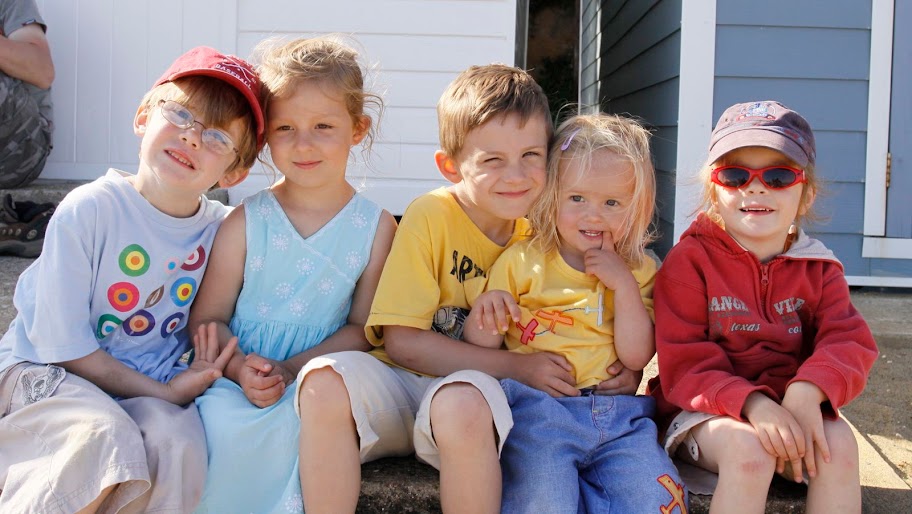 The Jackson Five. Sort of.

Tomorrow morning, if I can summon the will-power, I am off on the Flats again. Targets include Spotted and Pied Flycatchers, Whinchat, and Green Sandpiper. If I find any one these, you'll hear it here first. 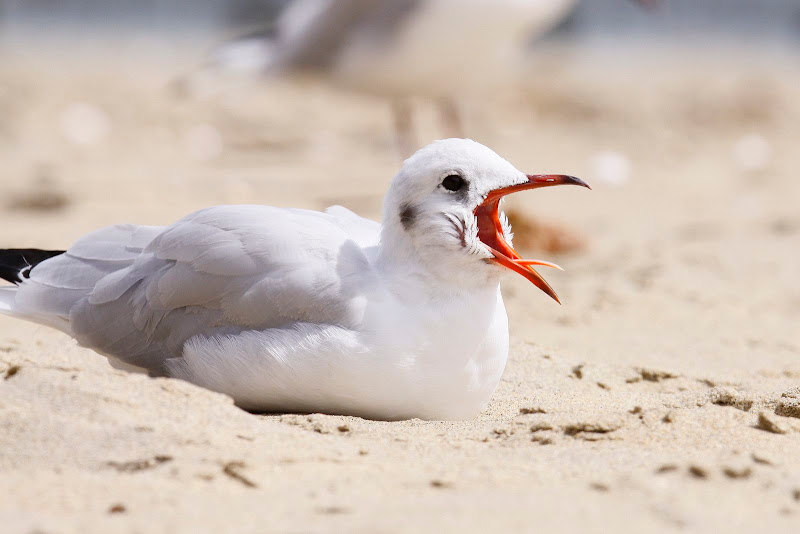 Posted by Jonathan Lethbridge at 08:54