As I approached Porthgwarra in the early hours of Sunday morning, I couldn't help feeling pretty stupid. Why was I doing this again, a mere eight days after the last time? This time I was with the Blowmonkey, and fellow Wanstead Birder Stuart. He probably wondered what he was doing as well - only a few hours previously he had been happily birding the [kick-ass] Flats with no thoughts of Cornwall or Sea-watching in his mind. As I casually mentioned it while we were kicking bushes for what turned out to be a Dunnock, you could see him begin to weigh it up. Hmm, sea-watching, Cornwall, would I like to do that? Turned out he would, so at 1:20am the three of us were stood in Porthgwarra carpark, facing away from the "No overnight camping" sign, and having a deserved beer. After a long and comfortable sleep, we hit the cliff. Almost immediately I got onto a large Shearwater circling near the Runnel Stone marker. We tracked it south-east, and once we had talked to some experts who arrived later, decided it could only have been a Great Shearwater. The next few hours were fairly quiet, with about 30 each of Sooty Shearwater and European Storm Petrel going through, but not a lot else. Visibility gradually reduced in drizzly conditions, and I wondered if I hadn't made a serious error in coming again. 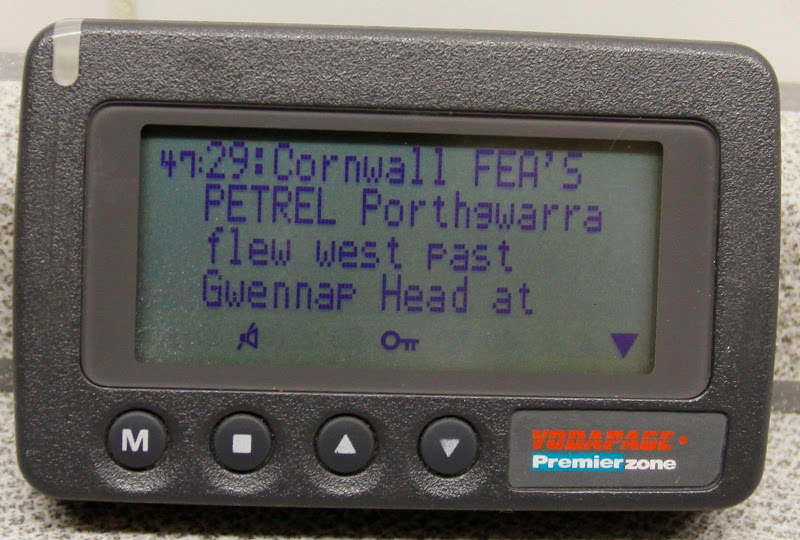 Happily negative thoughts of this nature were dispelled at 11:26am. All three of us had scopes trained on the Runnel Stone as this was the line being taken by Storm Petrels as they headed west. All of a sudden the quiet birder next to us spoke up. You'll have to excuse the language, but the air turned blue. What follows is a rough transcript of the next thirty seconds: "Great Shearwater coming right, almost at the Runnel Stone" Given our fortunate positioning, we were on it immediately. "Fuck, it's not a Great Shearwater! Fuck me! Dark underwings! Fucking Hell, it's a Fea's. It's a fucking Fea's!!! FEA'S PETREL! FEA'S PETREL going right!!!!!!!!!!!!" We watched this pelagic gem shear slowly west until it disappeared into the mist, and then the celebrations began. News was phoned out. The finder was quite calm once the bird had gone past actually, turned out he had seen a few and was a very experienced sea-watcher. Monkey and I showed no such class, and were going ballistic, disbelieving of what we had just seen. At this point Bradders, recently arrived back in the UK from Canada, and knowing I was in Cornwall, unwittingly texted me. The exchange merits reproduction here.

Bradders: So how's Cornwall? Falling over flocks of Little Shears and Albatrosses?
JL: No Little Shear or Albatross, but we just had a Fea's. Is that good?!
Bradders: Please tell me you're winding me up...Who's with you?

Needless to say, a gripping conversation followed within minutes, repeated shortly after with Vince, who also called in shock. Meanwhile Monkey had roughly the same conversation with Hawky, and sent a few gripping texts of his own. Played for and got I say. Well that isn't quite true I suppose, there was a very very large slice of luck involved. But I had been tracking the winds for about a fortnight, had pored over the short-range forecast for the weekend, read the results of various mid-week sessions at Pendeen and Porthgwarra with interest, and conversed with a few experienced people from the SW. As a result of what was actually many hours of mucking about on the net, more than were eventually spent sea-watching by some margin, I decided it was worth the trip, but never in my wildest dreams had I considered Fea's. My big hope was Cory's, and one that remains unfulfilled. About an hour after the Fea's went past, the fog rolled in and didn't lift for the remainder of the day. Feeling it was probably all over, we left Porthgwarra at about 1pm, and twitched the nearby Citrine Wagtail at Marazion. We returned to the cliff at 4ish to check conditions, but if anything it was worse so we headed back to London. Monkey spent most of the trip back mentally composing his blog for maximum grippage. How childish. There are no thoughts of glee as I sit here typing. None at all, no. And no thoughts of posting unnecessary and repetitive photographs of pager messages, no way. 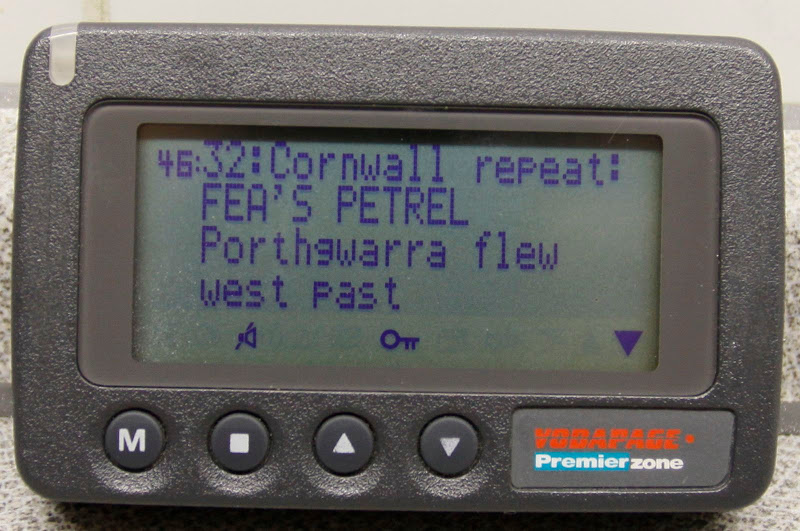 I won't be going that far again this year, though remarkably the Fea's went past Porthgwarra again today. But I am already ear-marking a few weekends for next year for something similar. I suspect the Monkey might be quite interested, and less arm-twisting might be needed to get him to come. Hope his snoring issues have been sorted out by then.