In my last post I mentioned I was unemployed and that this is good for twitching rare birds, especially megas that are found on weekdays and very sadly only stick around for a few hours. The last part is very true, as proved once again today. The first part however is not true. No, I am not unemployed. That has perjorative connotations, and makes me out to be some kind of wastrel good-for-nothing flip-flop-wearing lay-about. Many parents throughout the land choose to stay at home in flip-flops without an income in order to look after children, and that is what I am doing. I am officially a stay-at-home-except-when-a-rare-bird-turns-up Dad. Nothing wrong with that.

One of these is not a Black-headed Gull

It is said that fortune favours the bold. When the Great Spotted Cuckoo was found in Norfolk yesterday afternoon, I could have gone for it there and then. I would have got it as well, except I would have arrived after my youngest's bedtime and she wouldn't have had any dinner. Model parent that I am, after much consideration this was ruled out as not being fair, and anyway the ratio of time spent driving to time spent birding was highly unfavourable. No, I resisted stealing a march, and decided to go today instead. I hatched a plan with the Monkey whereby I would take a gross risk and drive up early doors on no news, spend my redundancy payout on diesel yet again, and phone him with an pre-pager update as soon as I arrived. So whilst the Monkey slept soundly, no doubt dribbling gently into his pillow and dreaming of the next tick, I stumbled round my house half-asleep at 4.30am, woke up and fed a surprised toddler, made another picnic, packed the car and drove 120 risky miles. It paid off, the bird was still there, and showed superbly - Get in! 7:28am and the JL Bird Alert service swings into action a full 20 minutes before the pagers kick off. Other London birders start finalising plans, and Monkey gets in his car.

Very unfortunately the bird chose to bugger off at about 11am, and was not seen again all day. Monkey arrived at about 11:00:30. Oh dear. This is a genuine "oh dear", not, I assure you, to be read with a smirk unless you are cruel and heartless, which I am not. Seeing a rare bird is a thrilling experience, you want your friends to be able to enjoy them too. Dipping is horrible, really crummy. I dipped a Fan-tailed Warbler last year, which is really really rare, by 30 seconds. I would have preferred to miss it by several hours. But at least Monkey's children got 5 quality hours in the car with Dad and were able to experience birding at its best. I wonder what they talked about on the way home? 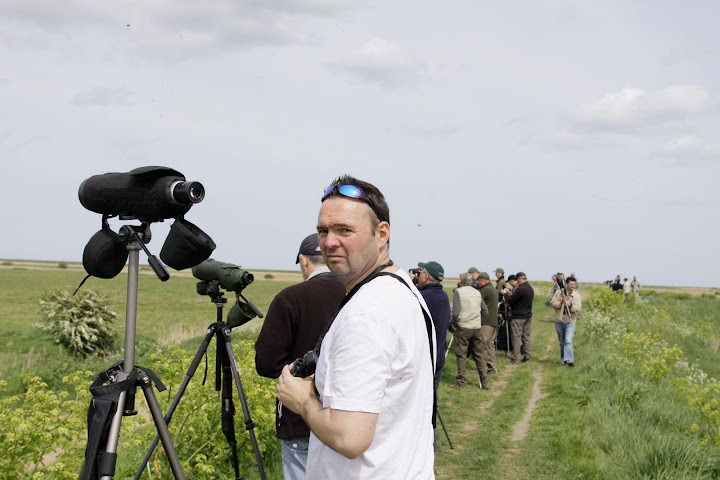 This is a Tick-Monkey. Can you imagine what a Dip-Monkey looks like?

Later on in the day I dipped a relatively long-staying American Golden Plover. Whatever. I saw a Great Spotted Cuckoo! This bird also means that I am once again ahead of Bradders again in the year-listing game, although probably not for long as very happily the Cuckoo has been refound again this evening approx 1 mile from where it went missing, so the guys can have another crack at it tomorrow. Let's hope it dies in the night, er I mean stays all night.