The last few days have been tough. Mrs L is away camping with the eldest, and I am left with the two girls. No problem, I am an expert at parenting now, and anyway, middle kid (need to think of some pseudonyms) goes to nursery on Monday and Tuesdays, how hard can it be? Hard. Unfortunately a small light reddish area underneath middle kid's (still thinking...) eye on Friday night had developed into a horrible bright red and scabby sore by Monday morning. By some miracle I managed to get a doctor's appointment ahead of the squealing masses, and impetigo was confirmed. Highly infectious, so nursery was out. Bugger. Took a tricky decision out of my hands though, as earlier in the morning the nursery had called to say that two kids in her room had contracted swine flu, and it was up to me whether I brought her in or not...

The weather has been pretty naff, and staying indoors has been the easy option. I have read more Thomas the Tank Engine stories than I care to recount, picked up every toy in the house at least five times, and watched more DVDs than is healthy. By yesterday we were all a bit cabin-feverish, and despite the intermittent rain I dragged us all out birding. I love birding, I really do. I don't know why I find it so difficult to get my butt out of the house; as soon as I am actually out there it is fantastic. So off we went. Not in Wanstead obviously, one step at a time, but it was definitely birding. Rainham was the destination, an easy sell as it has a playground, a cafe, and a shop. 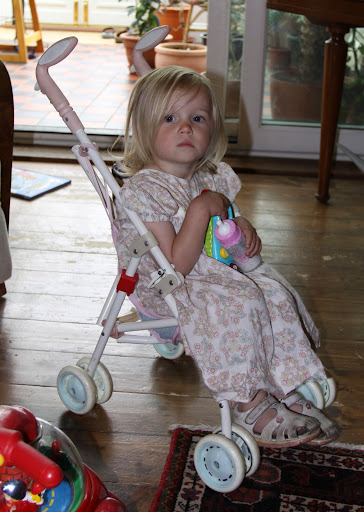 I think she is trying to tell me something

As it happened, the birds were pretty thin on the ground. I saw some Whimbrel sat on some posts before I had even left the visitor centre, and a Green Sand was the only other bird of note. There is no water on site, which is going to make for a rubbish autumn unless we get a bucket load of rain sometime soon. But it was a pleasant amble round, we looked at frogs, daisies, the odd butterfly, and a few birds. I surprised myself with the Green Sand, ID-ing it in flight before it had even landed, and thus appeared mightily talented to two old dears nearby, but I guess you get lucky sometimes. As soon as it landed I decided it was a Redshank, and was forced to scope it, whereupon it resolved itself into a Green Sand again. Hopeless. Still, it was nice to see a few familiar faces, have a chat with H, and crucially it ate up three hours and got us all a good dose of fresh air. I am not entirely convinced of the benefits of the latter though. All the days we have stayed at home the girls have been good as gold. Yesterday evening ended with the two of them screaming their heads off, wanting Mummy, Linguini con fave fresche uneaten in front of them. 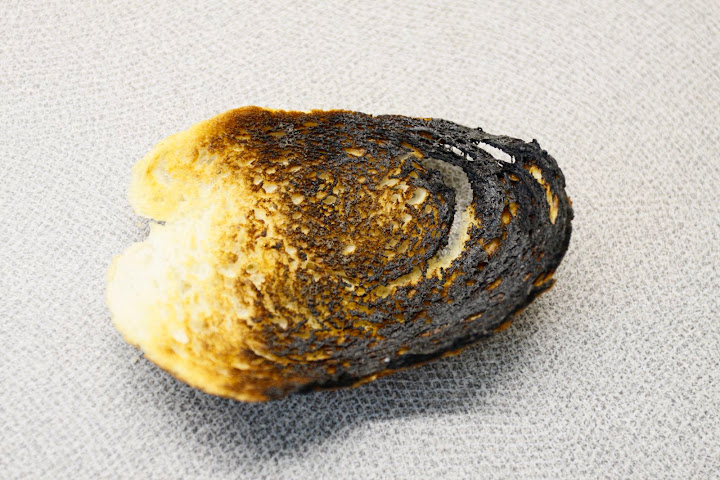 Blogging can be a distraction when making toast

Also, whilst yesterday's post was about the need to take this less seriously, I immediately caved into adding something called the Fat Birder Top 1000 Bird Websites application to the bottom of this page. I came in at an ego-busting 992 so might be taking it off again - a lesson if ever there was one!

Posted by Jonathan Lethbridge at 08:31