Yup, you guessed it, a punter at the "organised" Caper watch last week called a Mallard as a Capercaillie. I watched it fly in, and land in the vegetation with only its head sticking out. 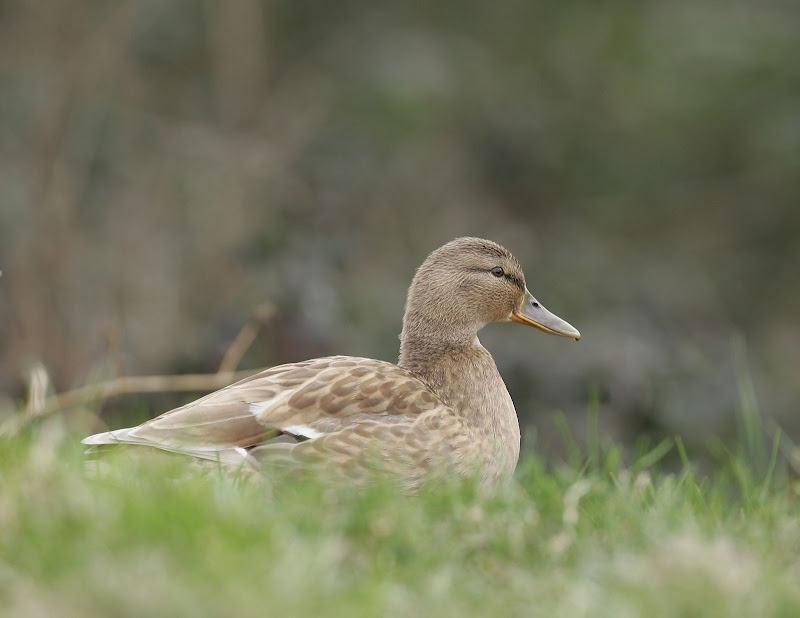 Capercaillie. Brown, so a female.

"I've got one!!!" came an excited shout from my left somewhere. "I bet it's that Mallard" I thought. And it was! I've made more than my fair share of ID cock-ups, but I would have been truly proud to add that one to my list. That basically sums up the whole experience. Two poor RSPB staff, and a hide full of numpties that couldn't have ID'd a Capercaillie if it had walked into the hide and sat down next to them. I very nearly didn't go, but seeing as I had Muffin with me, I thought it might be easier. Mistake (although the toilet was handy). Once people had stopped calling Mallards, very occasionally a real Caper would be seen, and then there would be a desperate mass rush to that person's viewing angle, which was basically identical to all other viewing angles in the hide. Predictably the Caper would vanish before more than about two people could get on it, or alternatively morph into a duck. The poor RSPB guy would try and find a clear view, set up a scope and invite people to look through it, but then no, a lady needed a step in order to be high enough, the step knocked the scope out of position, start again..... and of course the bird would have moved.

In the middle of all this, one of the RSPB staff fell over and bashed her head. It initially looked bad enough that an ambulance needed to be called, and so the other member of staff had to go and sort all that out. This didn't improve matters, as then there was nobody to even vaguely organise what was going on, and it became a free-for-all. Never again.

And then there were the directions. "It's over there, in the trees at the back!" Genius. "Could you perhaps be more specific?" "Um, errr, er, umm, err, at the back! In a tree!". Nobody had a clue. One o'clock, Two o'clock etc, scope widths and even rough distance in metres were all foreign concepts. Muffin and I were tucked in at the front, using one of the kneeling-height viewing ports, when I finally found a male sat in a tree. Once both he and I had had a decent look, I called out some proper directions. Some slightly less-dudey people were able to follow them and get on the bird, and then offered their scopes to others, as did I, and eventually most people present managed to see it before it flew down and disappeared. Job done, we packed up and left, passing the paramedics on our way out.

I don't know what possessed me really, I'd seen and heard Caper before at other places very nearby, and had some decent gen from friends who had been up last year, so I should have just done that. Still, we saw one, and that's what counts. And despite the comedy, very satisfying it was too. My previous Caper experiences were limited to the back-end of a female disappearing rapidly through the pines, and two males heard only. I had ticked all three of course, but somehow this felt like putting things right.

Posted by Jonathan Lethbridge at 21:17