Next time, stay on the Patch

Once again I was out on the patch this morning. Despite the promising weather, my inital hour on the Flats was unrewarding. I met up with Stuart and we decided that the Old Sewage Works could be worth a try. Half way there Paul phoned with the news that things were going pretty well at Rainham. Dave Mo and H had had yesterday's Nightingale, several Garganey, and an Arctic Tern on the river. I changed my plans and turned for home, joking with Stuart as I left that he would probably find a Nightingale now.....

Guess what? About a minute later, Stuart called with the news that he had just heard a Nightingale. I assumed he was winding me up, but he was insistent. I started running back. Whilst still talking on the phone, within sight, he heard it again. Half a minute later I was with him, expecting to hear Nightingale any second. Nothing. Nothing at all. What a complete bummer. 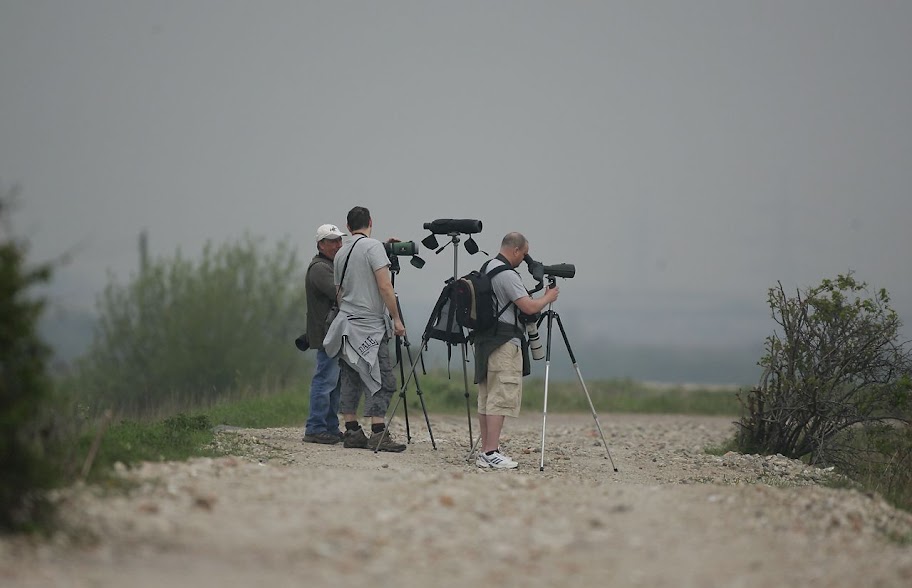 I decided to press on with plan A, or was it plan B? Let's call it plan Rainham. I met up with Dave Mo, Paul and the Monkey, and it was very successful, although sans Nightingale. From the sea wall we had several Arctic Terns, at least fifty Common Terns, a drake Garganey upriver, and two adult Little Gulls. On the reserve we were treated to another drake Garganey, and a sustained shower dropped many hirundines and Swifts in over Aveley Pool. Rainham year-list now 129, having added the Spotted Redshank last night, and 173 in London. Brownie Points, nil.

So a rather profitable morning at Rainham, but I am sat here cursing my inability to stick to any sort of plan whatsoever. I spent much of yesterday evening agonising over whether to go to KGV for Terns, whether to go to Rainham super-early and have a crack at the Nightingale, or whether to just stay on the patch. In the end I decided to do the patch. Commendable, but then I changed my mind, and thus missed a patch tick by about thirty seconds. As it happened, Rainham would probably have been the correct choice, as the Nightingale there sang at dawn, plus all the other stuff - the Mo had a cracking morning!

The trouble is that I am trying to do too much. The usual story. Last year I was running round the country, and thus missed stuff on the patch. This year I'm not doing that (209...), but I'm trying to do Rainham as well as Wanstead, plus trying to get to 200 in London. At this time of year, it's impossible to be everywhere at the same time, but that is what I want to do. Days like today remind me why it is pure folly. Rainham was great, but I would have preferred a patch tick. Maybe next year I'll just do Wanstead...

Yesterday was the same story. I started off on the patch, was having a really rather good morning with a couple of Wheatear and a showy Lesser Spot, and then the pager bleeped that the Bluethroat was still at Welney, so in a heartbeat I abandoned the patch and went there instead. I don't think I missed anything in Wanstead this time, but it's bound to happen more often in the coming weeks. A superb bird by the way, recommended it to anyone, even someone who hates birds. It's blue! Bradders and I arrived about five minutes after four hours of continuous singing out in the open, and didn't manage to see it for three hours, but when it showed briefly it was all worthwhile - incidentally my first on the planet. More amazingly than that, it was first visit to Norfolk this year. 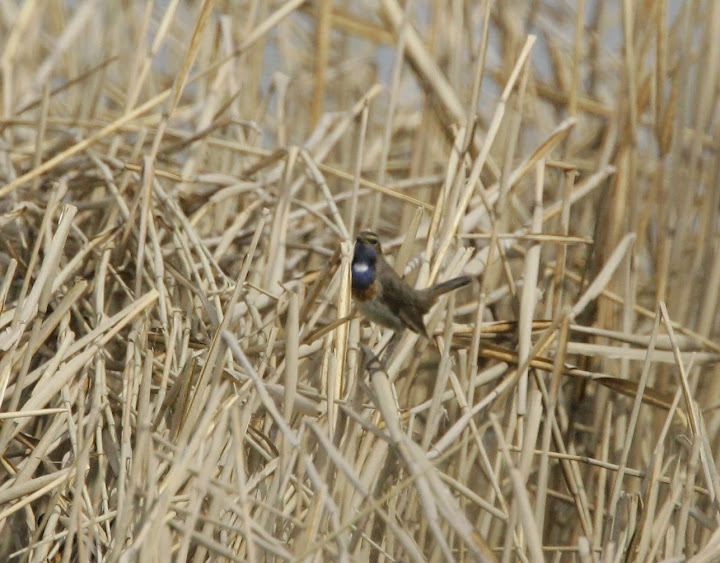 Back at KGV we feasted on 60+ adult Little Gulls with Paul W, easily the most I have eaten seen in London. We were unable to convincingly string any Common Terns into Arctics, so did a circuit of Rainham after it closed. The only bird of note was the previously mentioned Spotted Redshank on the Targets. Glad to get it, means I don't have to go to Norfolk for my London tick this year. There were at least ten Wheatears in the anthill field, and on the northen boardwalk I had another crack at the Reed Buntings with my new lens. The photo below is my best effort. If you click on it, it will become bigger and nicer.