Not sure really. Many things.

A direct quote from Mrs L only recently, and rather damning. As a result of Lesser Kestrels, Ring Ouzels and suchlike, I've done very little washing in the last two weeks. When this was noticed by my beloved, I tried to deflect the inevitable criticism by saying it was too difficult, and that the additional complexity arising from the amount of wool in the house meant it wasn't fair. It fell on deaf ears, and I fear I have lost some BPs. The washing situation is now resolved, no thanks to me I might add, but really I could have done better. The silly season has not even started yet, and already I'm failing in my basic duties. Really I should spend the hours of darkness when no birds are visible doing all of this stuff, thus leaving the days clear, but then I wouldn't be able to sit in front of the computer for hours and hours every evening. This is a real problem.

Yes, blogging takes time, even this one. One of my favourite reads, Not Quite Scilly, has unexpectedly wound up, citing too much time as one of the reasons. This is a great shame. The other reason, if I understand him right, is a fear of becoming stale and repetitive after two years blogging. Luckily, there is no chance of that here! Perish the thought! No, here you are treated to constant innovation, birdy talk of a varied and stimulating nature, and top parenting tips. If I ever start to detail the minutae of my domestic trials, or post endless photos of mis-identified Gulls, that's when you need to start worrying.

Of course, that would never happen, but believe it or not, writing this does take time. Sometimes of course I just bash it out - though you would never be able to tell - but it can also be more involved on occasion. You are able to write for as long as you want, there is no word limit. Blogging does not encourage thrift or thought. If I felt so inclined, I could just waffle on and on for ages and ages, rather than carefully craft a post of just the right pace and length. Editing? What's that? Writing that recent article for Birdwatch magazine was one of the hardest things I have done for a long time. I was restricted to 750 words. 750?! That's nothing! By the time I have got to 750 words on here, I may have a vague idea of what the post is going to be about, but really I'm just getting warmed up. So to be all wrapped up, not a chance! After my first pass, I was on about 1600 words, every one critical. I wept as I deleted whole paragraphs.... 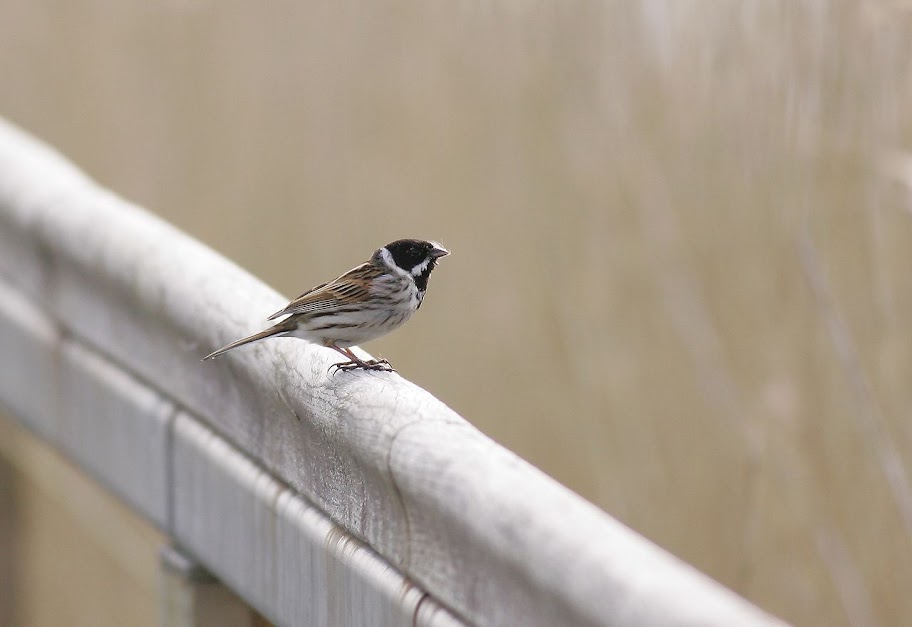 All blog posts need a photo, even a filler. Believe it or not, it does not even need to be related in any way to the subject of the post. No, it doesn't matter. Just insert any old picture and you're done. Like this Reed Bunting for instance. You will not find any mention of a Reed Bunting today, but somehow, it just works. I have no idea how.

So, to Wanstead, which is the whole point of this blog. The bird death saga rumbles on. The stupidity of the local populace continues to beggar belief. I've seen families walking past the "Biohazard" signs and stepping over the high-viz tape to go and feed the ducks by the lake shore. Fail. The Corporation had to install proper security fencing to stop them. Personally I'd have let Darwinism take it's course, but there you go. The latest news is that the test results are back. The poison was an agricultural pesticide used to control fungus and insects, typically by food producers. I may have the wrong end of the stick, but it could be that the people involved were not looking to kill off the local corvid population, but instead had just wanted to get rid of this stuff and so had left it on top of a bin.... In other words, idiocy, rather than malice. The poison may even have been in that margarine tub. I had thought that somebody had stumbled across the dead birds before me, and had put as many as they could in the tub and left it visible for the Forest Keepers to deal with. But who knows, this is all idle speculation. Two local men were arrested, and were bailed until the end of April, so we will no doubt find out more then. The good news is that the area is now safe, and there is no further risk to either wildlife or people, even stupid ones. The even better news is that the car-park remains closed - long may that remain the case.

Mrs L banned me from going out today. This was a great shame as the Pallid Swift in Suffok was showing very well all morning. I would very much have liked to have seen a Swift that to all intents and pusposes looks exactly like a normal Swift, except, well, less browny. And she claims not to understand twitching! Honestly.

I managed to get some birding in though, employing extreme cunning. Today is the first day of the holidays, and by 10am Muffin was climbing the walls. I altruistically voluteered to go and exercise him on Wanstead Flats with a football. And binoculars. Shhhhhhh. There were Chiffchaffs everywhere, a few singing Blackcaps, and a single Willow Warbler. Most of the time I had my eyes on the sky though, hoping to see a Swift, even a boring paleish one. Wouldn't that have been something?! I didn't get any hirundines either, though Tim and Stuart had a Sand Martin over Heronry. No matter, plenty of time left to get one of those.

Right, this post is now the perfect length, and has reached it's natural conclusion. Satisfied, I can stop. This has nothing to do with dinner being ready in twenty minutes and the need to peel carrots. Wanstead Birder - Uncompromising.

Posted by Jonathan Lethbridge at 20:17