I went to Rainham today and enjoyed a river-watch. Thousands of Gulls went west past the visitor centre balcony, presumably displaced by the severe storm lashing Britain at the moment. Just out of interest we counted how many Black-headed Gulls went past in five minutes. 200 was the answer, and it was a steady stream, so between 9am and 12:30pm, which is when we counted, we reckon we saw between seven and eight thousand BHGs go past. Whilst on one level this is extremely interesting, on many (all) other levels it is very dull, and we were hoping that something more exciting might accompany them up the river. Like a Bruinnich's Guillemot. We had to make do with a Little Gull at about half-ten. This kept us hanging on for another two hours, but nothing happened. The Black-headeds continued to stream past, with high numbers of most of the other Gulls as well, and at half-twelve, feet frozen, Hawky and I jacked it in and went home. 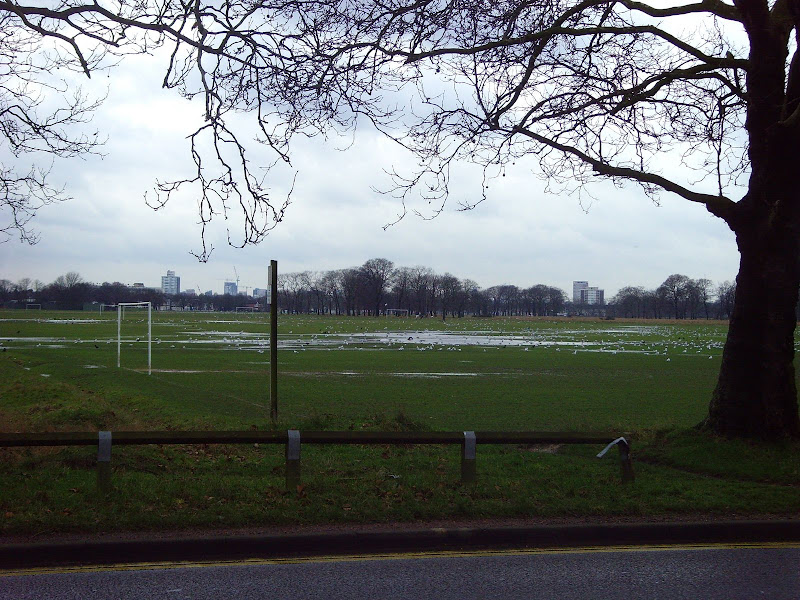 Predictably I was late, and so "offered" to drive Mrs L to her afternoon engagement. Tangled up in Ilford traffic, I took a back route towards Forest Gate and found myself alongside Wanstead Flats. Drat. And there were a lot of Gulls. Double Drat. The car mysteriously stalled, and at this moment I remembered that my scope was still in the boot from the morning at Rainham. Before I registered what was happening, I had the scope up, and was grilling the Gulls. Wow, my previous estimate of simply "a lot" turned out to be rather understating the numbers. I called Tim, who came out and was also suitably gobsmacked. We know we get a lot of Gulls, and the peak counts this winter have been somewhere in the region of 1000 Common Gulls, with perhaps 600 Black-headeds. Gosh this is developing into an interesting post isn't it? Well, Tim did a quick count and ended up at 2,500, predominantly Black-headed Gulls, all feeding on the new mega-puddle where the playing fields used to be. Could some of these be the same I had seen go past Rainham, now dispersed? We will never know, but they had to go somewhere. I'm a slower counter, but managed a high count of 82 Herring Gulls. This absolutely whoops the previous high-count, which according to my notes at least, was 17 last November. One even had a colour ring, which, when EURING's website sorts its bandwidth out, will be submitted to discover a no doubt scintillating life history.

Whilst sifting through these, I found this rather curious specimen. Not a putative Caspian I am pleased (and relieved) to say. I reckon it's just a Common Gull, but as you know I can't be trusted with gulls. Just look at its head! I've circulated it amongst a few fellow birders, and received some sensible and not-so-sensible theories, but do any of you have any ideas? 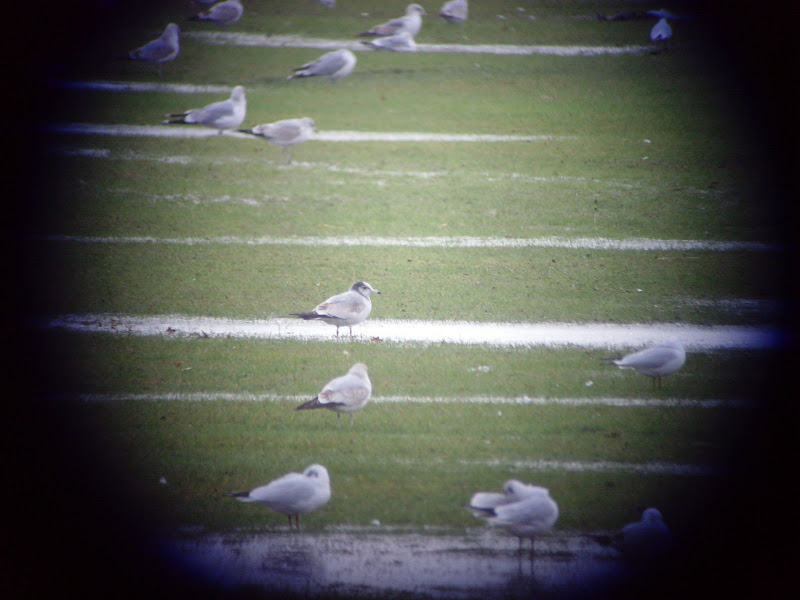 
Posted by Jonathan Lethbridge at 21:12