Your Tuesday morning mission, should you choose to accept it: Drag your lazy arse out of bed at first light and go and look for Tim's Pheasant.

Rational JL: "But the bed is lovely and warm, and it is dark and cold outside. And anyway, Pheasants are boring, non-native, and don't count."

Birder JL: "They do count, it is a site tick, and a patch mega. You don't get many of those. Now get up."

So it was that I found myself near Jubilee Pond at 7am staring at an inpenetrable clump of plant matter that I strongly suspected that the Pheasant would be in, if indeed it was still here at all. It was. It took an hour to see it - I was impressed by my dedication - but finally it broke cover and ran across a stretch of open ground into a smallish patch of broom. Although the Flats is a large area, it is very disturbed and slap bang in the middle of urbanity. To get the number of Snipe that we do, the occasional Woodcock, and now a Pheasant, frankly I'm amazed, but there you go, that's urban birding for you. It has the ability to constantly surprise - when did you last get excited about a Pheasant? Exactly. 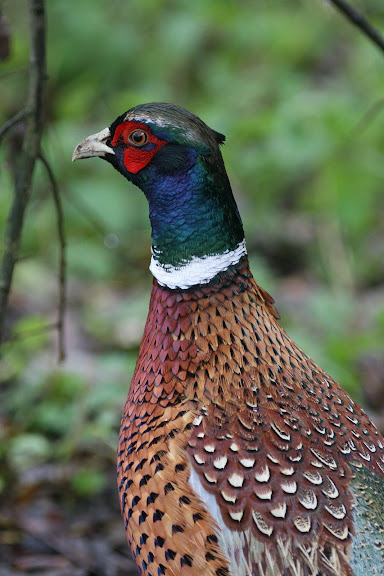 I did a quick round-trip of the Flats and the Park in the time I had left. Highlights were three Egyptian Geese on Jubilee Pond, the female Kingfisher still on Perch Pond, and a year-tick in Grey Wagtail. Although a cold north-easterly was blowing, signs of spring are everywhere - Dunnocks singing from the tops of bushes, the cyclical and repetitive song of Song Thrushes from taller trees, Robins having a go, Ducks getting frisky, and a Magpie carrying twigs. Five weeks to go until Wheatear season - they must be gearing up to leave. Perhaps the early ones already have?

Posted by Jonathan Lethbridge at 09:49