Yesterday, before thoughts of Dusky Warbler even entered my tiny brain, we went on a pilgrimage of sorts. I meant to write about it yesterday, but got a bit distracted by ornithological highlights of the tick variety. In case you were intested, debate still rages about the exact identity of the Rainham geese at the weekend. No? Thought not. 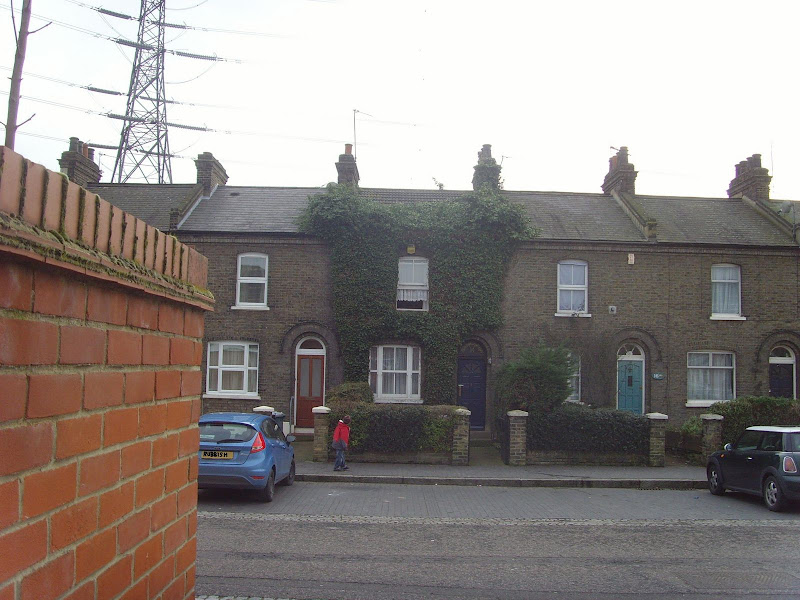 It was here, through the open window in the ivy-covered house. That was our bedroom, and he was born towards the back of the room on the left. He was actually fairly interested, as perhaps you can see. As young, naive, and nervous parents-to-be, we took a tour of the maternity ward at the local hospital. As we stepped over a dried pool of blood to be shown a windowless birthing room with shiny steel bits, we decided that perhaps this wasn't for us. Alternative options were thin on the ground, so we decided to have him (it, at that stage) at home. Many people counselled against this, what if something goes wrong etc, but the hospital was so vile we just couldn't do it. In the event everything was fine, and it was so brilliant in fact that we did it with numbers 2 & 3 where we now live. Six years on, it is rather nice to be able to take him back to where it all started. It's not quite as romantic with the other two, as we just have to walk to the front room, where they were born about six feet apart, near the sofa and piano respectively, but in time I am sure it will be. I was born in a hospital that no longer exists, I think it is posh flats now. Very sad. AND my school has been razed to the ground to make way for sheltered accomodation. Not even a blue plaque....

As you can see, the new owners have an ivy problem. A serious ivy problem. We enjoyed a love-hate relationship with the tivy. With House Sparrows in decline seemingly everywhere, our house in Becktonia was a haven, with a thriving colony living in the ivy, perhaps 50 birds. They were a real feature of our time there, you could hear them constantly, and five years on I remain highly attuned to the sound of Sparrows anywhere. One of the first things I did on moving here was to put one of those Sparrow hotels up on the front of the house, but to date nothing has used it. I miss those Sparrows.

We kept the ivy so that we could keep the Sparrows. The roots burrowed into the mortar, and made the front walls permanently damp. It was incredibly vigourous, and had to be trimmed three times a year before it got out of hand. This was one of the most horrible jobs imaginable. Coughing from four months of accumulated Sparrow "dust", up a very tall ladder, constantly squeezing the secateurs, and prizing ivy from brickwork, your fingers would redden to the point of raw. It took hours, and then you had to clean it all up and go to the dump. And you couldn't leave it, or just do it a bit, as once it goes over the guttering and onto the roof, you've had it. The new owners have officially "had it". It's over half way up the tiles, and all over the chimneys. Past the point of no return. Still, not my problem, I'm just very pleased that the Sparrows are still there and thriving, and Muffin was pretty pleased to see them too. In a way, they're his Sparrows.

Posted by Jonathan Lethbridge at 20:41