I had a minor hangover this morning - too much red wine on a school night. Nothing heinous, just a dull ache, but enough to make me mildly tetchy this morning. So when I arrived at Tesco to find all the child and parent places taken up by the self-centred, egotistical, inconsiderate, lazy and selfish I somewhat lost my rag. How about that, no swearing. And it would have been so easy to (Parus is my role model). Anyway, as one bloke got out of his car, I asked him out of the window how many children he had, and was it more than the two I had? He told me to get f...... and walked on into the shop. Nice. Shame I wasn't in the Landrover, then I could have parked on top of his car.

Tesco Customer Services were quite sympathetic about it, but sadly not to the point of banning him from their shop and towing away his car. No, they provide nice wide spaces temptingly close to the shop, but can do nothing to enforce them. Or choose not to enforce them, whichever. Instead they rely on people to do the right thing. They rely on kindred-spirit, on the wholesome goodness of their customers, on human nature. They must be out of their minds! As I have perhaps alluded to in the past, when was the last time you saw anyone go out of their way for anyone else? It basically doesn't happen anymore. No, these days it is every man for himself, and the rest of you can go hang yourselves. If there are a few spaces next to a shop specially marked out for those in need (ie me), there are more than enough people in this country who will not even think twice and just park in them, and the needy be damned. So what can we do about it? Not a lot really. Vigilanteism is not to be encouraged, and in many places you probably risk getting stabbed for your troubles, so you have to let it go. The meek shall inherit the earth? Not likely, not in London anyway. I'd write to my MP, except he's self-centred, egotistical, inconsiderate etc, and been forced to quit over £60,000 of expenses he wasn't entitled to. Bet he parks in the parent and child spaces too.

Before I torched his car, I took a photo of it. Name and shame. Well, don't know his name, could probably find it out, and shame. Or something. 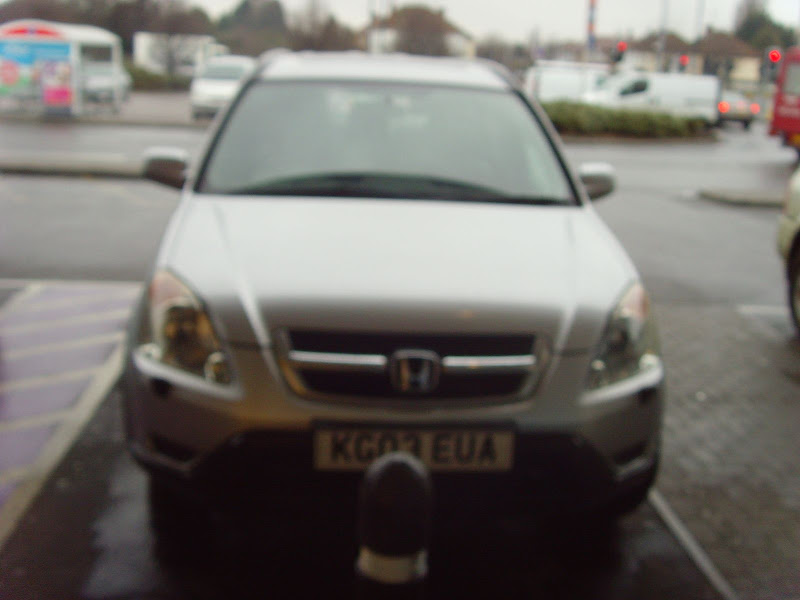 And here is another, a BMW convertible. Always likely to contain a gaggle of children for the weekly shop. Couldn't see any kiddy seats in it, perhaps it was a baby seat and was now on the trolley, and the suit-jacket spread out on the back seat was just thrown there whilst trying to marshal troublesome children onto the pavement?

I didn't find the guy in the shop. Perhaps fortunately, as he may have left with an imprint of Leica 10x42s in his forehead. Just kidding. They're 7x42s.

On the way home I checked the Basin. Again. I have been remarkably diligent about checking the Basin on a daily basis. So far, and despite the cold weather of rare duck-influx happiness, I have found precisely nothing. My best find of 2010 has been a Great Crested Grebe. Twice. Well whoopeedoo. If you're wondering why there hasn't been much of Wanstead recently it's because there hasn't been much in Wanstead recently. I've been birding various areas on an almost daily basis, but February is a tough month for patchworkers. Generally in your January enthusiasm you have picked up most of what is likely already, and February is therefore rather lean. The Pheasant was great though, and if I hadn't mentioned it, I managed to see the White-fronted Geese in the Ingrebourne earlier in the week as well. And to complete the goose list, yesterday there were two Pink-footed Geese in Dartford, but I couldn't be bothered to go all the way over there. The mere thought of needing to cross the bridge defeated me. So much for a London list this year.

Posted by Jonathan Lethbridge at 10:51