I had to go up to Cambridge today to deliver a grandchild to a grandparent, and whilst there I noticed that there was a Waxwing nearby. It was a nice blue-sky day, so I went to see if could get a few shots of it. I couldn't, chiefly because a resident Mistle Thrush was having none of it and kept chasing it away. Luckily, here is one I prepared earlier. Much earlier, and in a different county in fact. 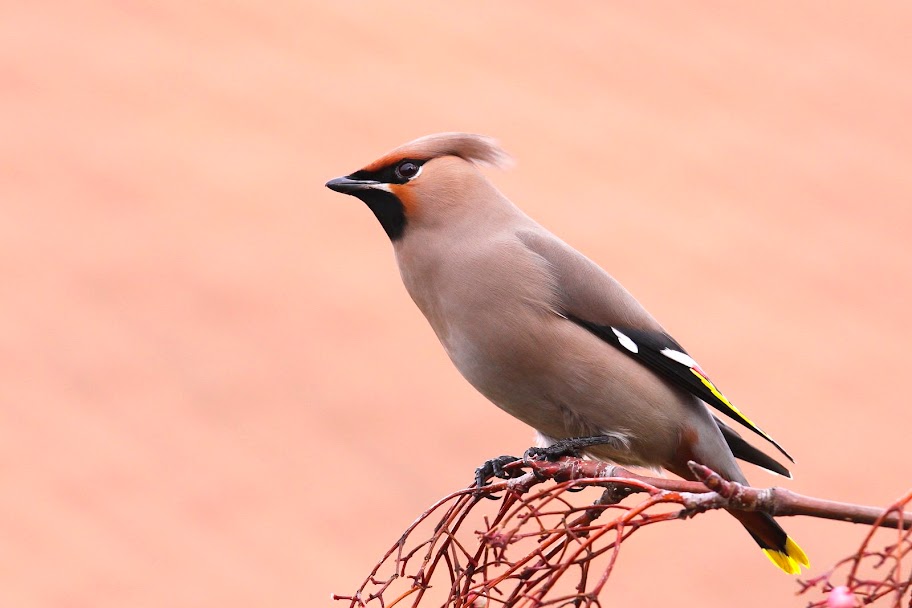 Instead, I decided it would be educational to go and see if I could find the Rough-legged Buzzard less than ten minutes away. Become a better birder - not year-listing you understand. As I arrived at the lay-by, the very same lay-by I had seen a Rough-leg from last year, there was a car already there, and a birder looking through a telescope.

"Have you got it?" Note how "it" is all that is necessary, mentioning the bird by name is entirely superfluous.
"Yes, it's in here!"
"Do you mind if I take a quick look before I set up?"
"Go ahead"
"Thanks"

In my brief glance it looked suspiciously like the Common Buzzard I've been seeing a lot at Rainham. Still, set up the scope anyway, take a closer look.... tail first. I was very nice about it, it's not like I'm on the BBRC is it? But it was basically, to my relatively untrained eye at least, a Common Buzzard. The big problem was the the undertail didn't have a broad black band, and wasn't white. He wasn't totally sure, he said, and he valued a second opinion. Fair enough. It then flew revealing a dark uppertail.

I had to go anyway, so headed back towards Cambridge, but only a short distance down the road another car was parked up, with another scope pointing off into the distance. You can probably guess where this is headed, but this is my blog, and as you will all be aware, me getting it right is fairly mega, so I'll continue to drag it out. Bear with me.

This one was distant, and facing away from us in a tree, but whilst it had a paler upper-tail than the previous bird, and a dark-ish terminal band, there wasn't any trace of pure white at all -overall the appearance was beigey-brown. He tried to talk about how pale the undertail was, and about scapulars. If I'd have know what scapulars were, I would probably have been in a better position, so instead I pressed on with the tail theory, and argued that even at this distance, you should be able to easily pick out the distinctive black and white pattern, especially as it was on an exposed branch in the wind and using its tail to maintain balance. He didn't believe me, fair enough I suppose, I wouldn't believe me. Instead he called a bloke who had actually seen it - the county recorder no less - which seemed quite sensible, to discuss the specifics of this bird's tail. I wasn't party to the conversation, but it would seem he rained on the parade as well, as once the guy had hung up he confirmed that the bird we were looking for had a white tail with a widish terminal band and then just one thinner tail bar. We all then agreed that this bird didn't have that. I drove back to Cambridge feeling smug. A dip, but a good one. I hope they didn't all think I was a tosser.

Actually I don't think they would have done. I was nice about it, and not arrogant at all - difficult to be when you know as little as I do about RL Buzzard features. I've seen three, ever. I would have liked it to have been four, but I have standards, and seeing as I'm not year-listing, I am being much more critical. Would it have got on last year? No, of course not!! As if.....who do you think I am?! The year before? Almost certainly.....

Posted by Jonathan Lethbridge at 16:00