I mean, wow! A day of many ticks. But first some ritual Gull shame and humiliation. It has been over a week since I stuffed up a Gull, come on! Actually I'm not even going to bother posting a pic, and it isn't quite a stuff up. To cut a long story short, I got very excited by what I thought might be a Caspian Gull on the Basin today - naturally, after recently mentioning I check it daily and it NEVER has anything interesting on it. So excited that I sped home for the scope and camera. Unfortunately through the scope it clearly wasn't one, but it had a few features that had me going for a bit, including really rather long spindly legs. Happily I came to the sorrowful (but correct) conclusion that it was something else, probably a Lesser Black-backed, but there was some heavy breathing involved for a while. Bloody Gulls. Even in Wanstead, where large ones are fairly scarce, they taunt me.

Things went downhill further with a report of a Penduline Tit at Rainham which subsequently flew off before I had even managed to leave the house to twitch it. Lunch improved matters no end, and then came another call that the two grey Geese on Wennington Marsh were Pink-feet and not Bean Geese anymore. Hurrah, the best things come to those who wait! Met Hawky up there and got great scope views which confirmed it. Funny old thing though, as the two Tundra Beans from earlier in the year hadn't been seen for a while, and the two Dartford Pink-footed Geese I couldn't be bothered to go and see had disappeared just before the weekend. On Saturday, on a Peregrine mission for Muffin, we had seen these two Geese out on Wennington, and called them (along with many people far more qualified than myself) as Beans. It's stretching the bounds of possibility that the two Beans could disappear at precisely the same time that two Pink-feet arrive surely, but there you go, and anyway, who cares, as now I've seen both. A London and a Rainham tick. 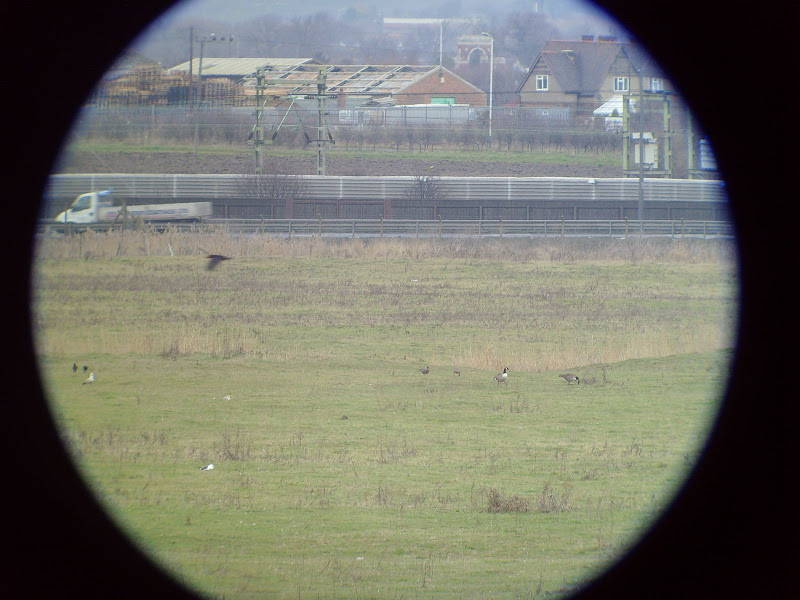 On the way back from Rainham with my long-suffering children, the Walthamstow Dusky Warbler was finally confirmed. I had given it an hour yesterday with no joy, and wasn't anticipating being able to go back with kids who are unable to keep quiet (and why should they, they're six and two!) to listen out for a small warbler going "Tuk". But I went anyway as I felt it would be my best chance with so many people looking. This proved a wise decision, as there was no way I would have found it myself. My parenting skills took yet another step forward with some wall climbing, some fence hopping, and some canal crossing, but I managed to see it. To be clear, the kids didn't do any of that, just their irresponsible father. They stayed put on the path and watched birder after birder engage in heinous acts of trespass. And to cap a fine day where he also got the Pinkies for London, Muffin has now met the legendary LGRE. And even helped him see the bird by passing his scope over the fence to me to carry it across the canal to him. How many six year olds can say that? Not many, and with good reason probably. I've promised him that tomorrow will be dominated by Lego. It also promises to be dominated by sleet and other unpleasant things, and indeed so does the rest of half term, so I'm glad I got the birding in today.

I leave you with yet another reason why Wanstead is such a cool and happening place to live. We don't struggle for newsworthy items round here, there is always something really really important and interesting going on. Today was no exception. 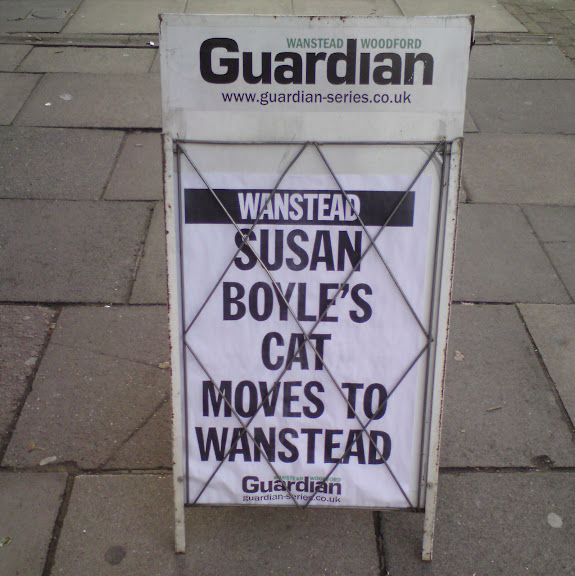 Posted by Jonathan Lethbridge at 20:07