No ticks today, I obviously need more lists. So with nothing to regale you with, I think a quick photo-essay on Wanstead Flats might be in order, so you can get to know the daily (hem hem) trudge. Some of my greatest finds have been here, including, on Monday, when I took these photos, such gems as Meadow Pipit, Skylark, and several Black-headed Gulls.

As you may know, the Flats are very close to my front door, so I go there often. They are also nice and wide and open, with good viewing angles and direct lines of sight. I can see people from a long way away, and nobody can sneak up on me, then hit me, and then run away with my binoculars. I find this very reassuring. What follows is mostly the route I take, the only difference being that I don't go through Long Wood. 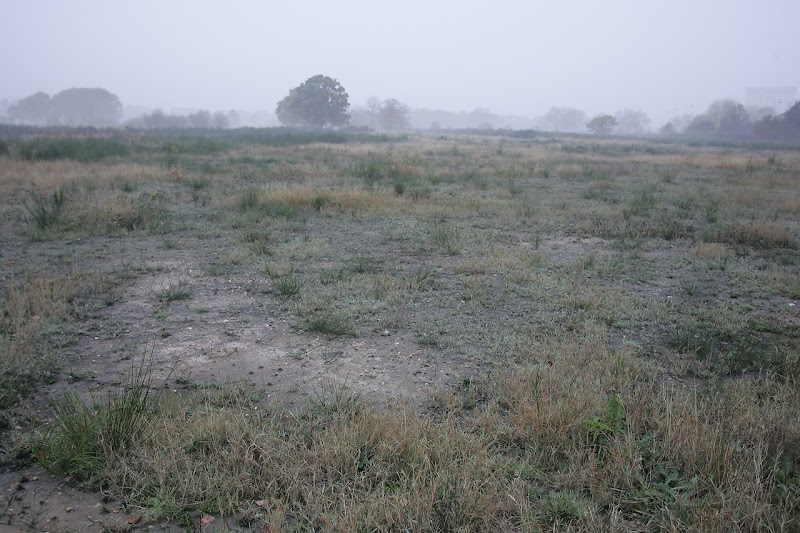 Here is the bit closest to my front door. I have had Snipe in here a few times, and one day I am going to find a Richard's Pipit as well. 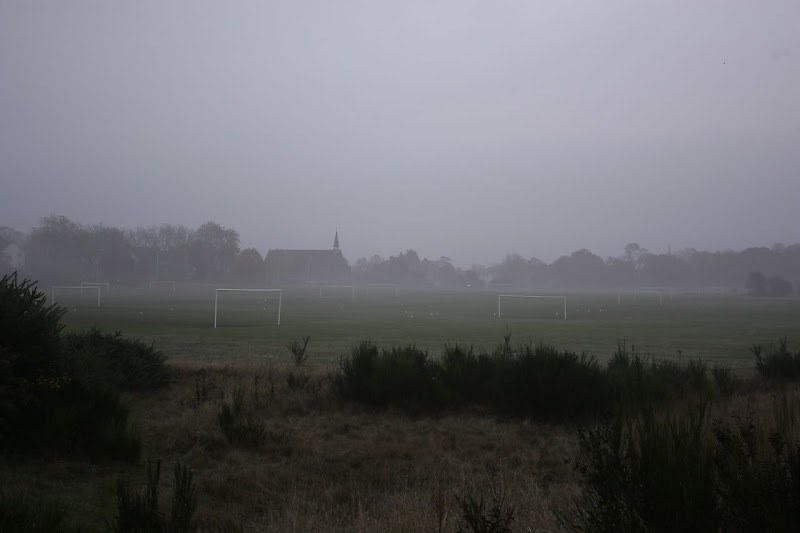 We have now crossed the road, and are facing what I call "The First Playing Fields that you get to". Mistle Thrushes and Jackdaws like this field. In the far right-hand corner is where all the Ring Ouzels hang out. It was quite murky this morning. 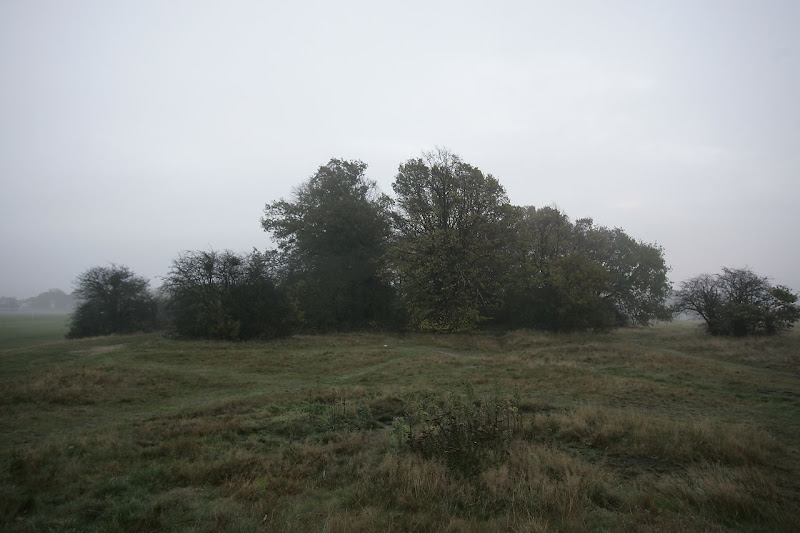 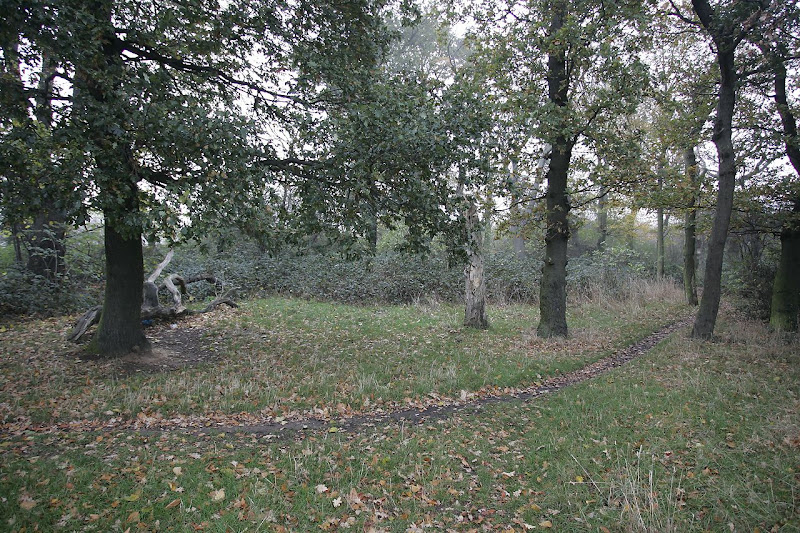 Long Wood. The Waiting Room... (on the trunk), and the path leading to, er, other rooms. 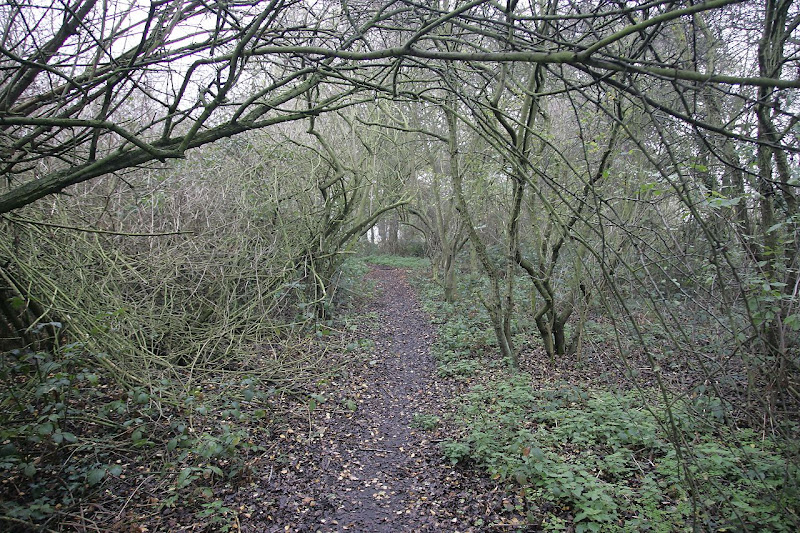 Don't go down this path. Especially not on Wednesday evenings in the summer. 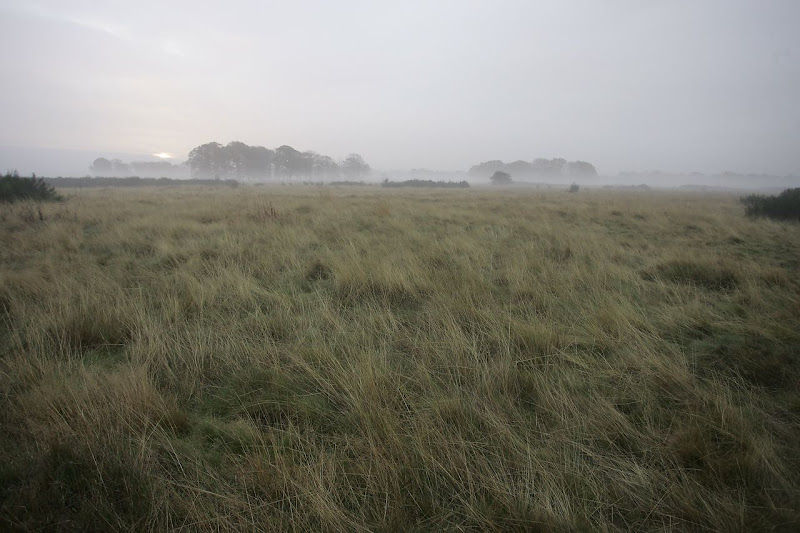 Moving south a bit, this is the biggest area of rough acid grassland, and is where most of the Skylarks nest. It is also good for Meadow Pipits. Reed Buntings can be found here, and Stonechats inhabit the broom in Winter. The Dartford Warbler was in the central patch of broom you can see here, and the Coronation Plantation is in the background. This is one of several stands of now mature trees that were planted many years ago in order to break up the barren feel of the place. 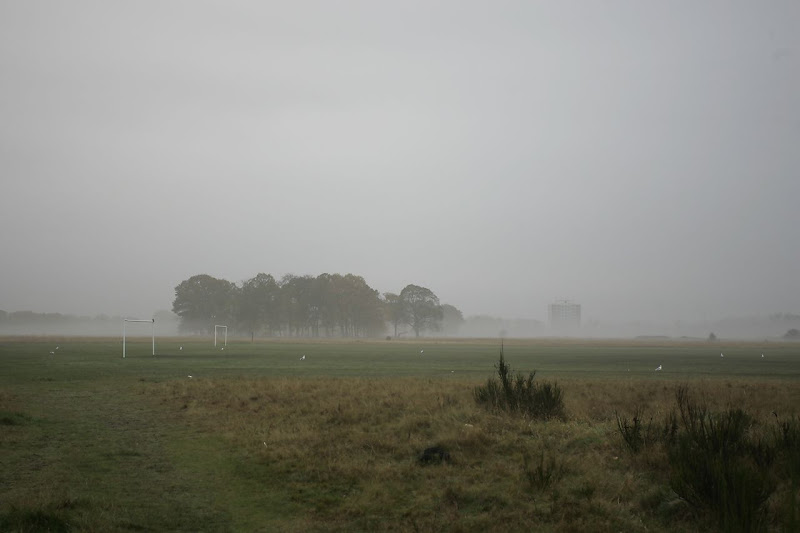 Another view towards the Coronation Plantation, also known as the 1953 Plantation. I've had Ring Ouzel on here as well. And Kestrel. 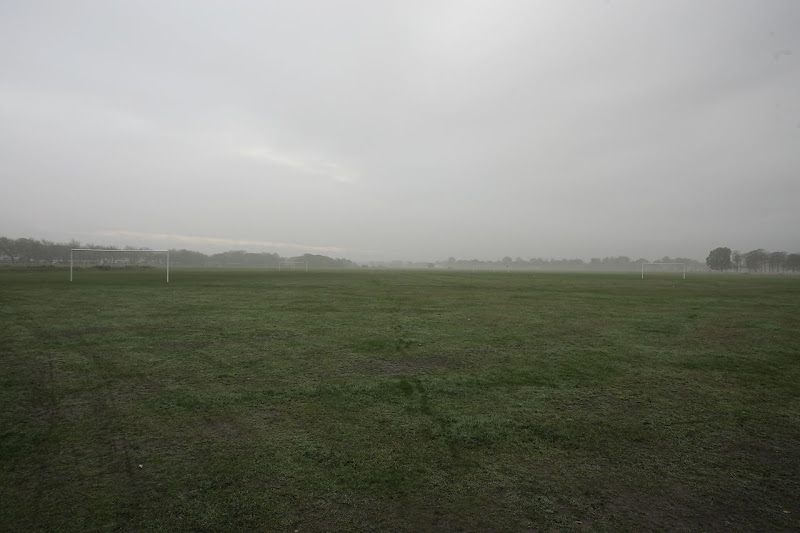 The eastern side of the Flats are dominated by about a million football pitches. When not being used for football, which is in fact most of the time, they are used by Canada Geese and various Gulls to poo on and drop feathers on. For avid gull enthusiasts, the species list, from commonest to rarest, is: Common Gull (go figure), Black-headed Gull, Lesser Black-backed Gull, Herring Gull, and Great Black-backed Gull (which I have seen twice). With so many Commons and Black-headed in winter I must be able to turn up a Ring-billed or a Med. Watch this space. 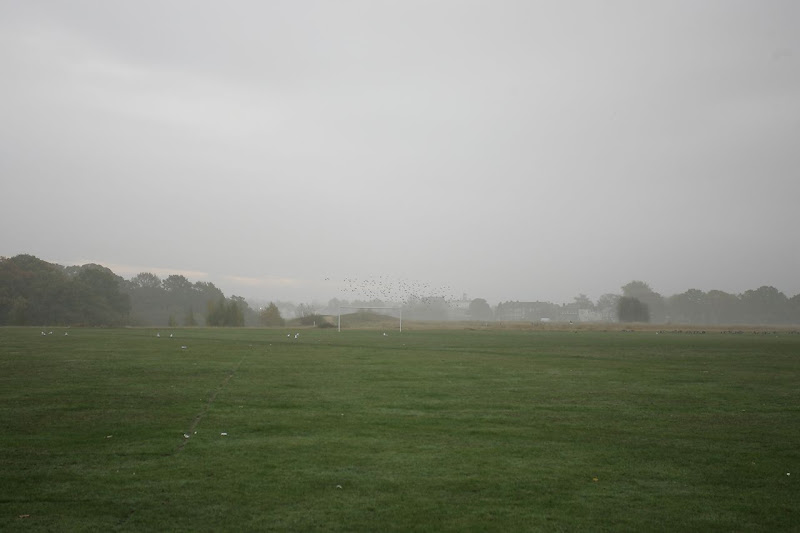 We are now approaching Alexandra Lake, parts of which are hidden in front of the large trees on the left. In the centre, through the goal posts, are the Sandhills, so named because a funny Crane with a bright red forehead appeared here at the beginning of October this year. Or maybe it's because they are hills made out of sand, I can't remember. I missed the Crane, but this is where I flushed a Wood Sandpiper in August, just left of the posts, behind the first substantial bush. And I've had Redstart in the obvious large Hawthorn on the extreme right. Twice. 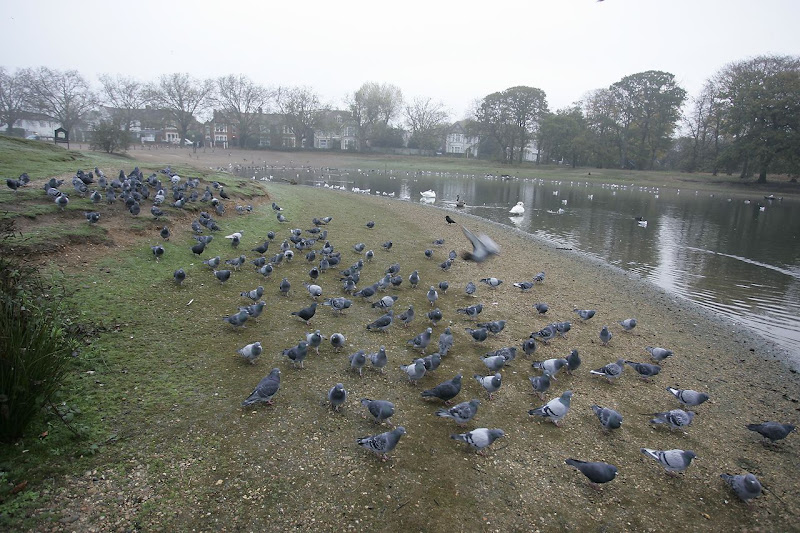 In addition to the odd Wood Sand, there are many other interesting birds to be found here, often in large numbers. Beyond the far end of Alex is another area of Hawthorn Scrub which in the past has turned up Redstart, Pied Flycatcher, Spotted Flycatcher, Garden Warbler and other good migrants like that. I didn't go there today as I needed to back for 8:15 else suffer the wrath of Mrs L, so there is no photo. After giving that a quick bash, most of the time I then walk back alongside the scrubby ditch (squelch squirch, squelch squirch) that borders the southern edge of the playing fields, and in which I have never found anything. Once that ends I can have a mosey through a couple of the other plantations (stumble trip, stumble trip) and then head back across the main rough grass bit (swishy swashy, swishy swashy), over the road and home (phew), but this time I hurried straight back the way I had come. Exemplary husband and father that I am, I was back at 8:15 on the nail. Mrs L then didn't leave for another fifteen minutes.

Posted by Jonathan Lethbridge at 22:12