I have had so many ticks recently it is difficult to know where to start. As all birders know, ticks are very exciting. VERY. Given that you can create lists for almost any combination of location, time period and circumstance, if you're ridiculous dedicated enough, you can pretty much guarantee yourself ticks all the time, and thus go around with a happy and self-contented grin on your face on a permanent basis. Winner. As regular readers will know, I restrict myself to only a very few lists, but despite this restraint, there have been ticks galore.

The first was the Snow Goose in Norfolk at the weekend. The same goose that gave me the run-around on my trip up a couple of weeks ago with Muffin. Then, despite finding several enormous flocks of Pink-feet, and with the help of an RAF Hercules practising low-level flying over grazing pastures, I couldn't locate it. This time it was a piece of cake - a huge flock of geese was on Holkham Freshmarsh, and it was with them. Couldn't get it from the road, so we had to fork out £3.50 to the thieving so-and-sos guarding Lady Anne's Drive. Once down at the far end it was very straightforward. I have been accused of being slightly whippet-like in my approach, but I can assure you I was calm and relaxed even with the prospect of a nervous, flighty and hard-to-come-by year-tick taking off in an instant, hidden amongst thousands of other geese and being lost to view for ever and ever and ever. #311 for the year. A mature and sensible total. The rest of the day was spent dipping various things so I'll gloss over that, but Norfolk in late autumn is sensational. Eight Shorelarks at nearby Holkham Gap were the most I have ever seen, and just beautiful as they fed in the soft afternoon light. One even had vestigal horns. The day ended at Cley not seeing an AGP, but with a glorious sky, a quartering Barn Owl, three Marsh Harriers, two trillion Teal and a vocal Water Rail, it could not really have been more perfect.

The next tick was this Monday afternoon. Whilst chasing a pesky squirrel off my bird-feeders (again), a Coal Tit called from a garden a down the street somewhere. Given I only just got Coal Tit for the patch, this is either A) excellent or B) a damning indictment on my birding skills. I suspect the latter. Monday was to get better though. At about 1pm news came through of a Snow Bunting at Rainham, feeding on the old sea wall. This would be a Rainham tick and a London tick, though not an Essex tick (boooo!). I was expecting Redsy to come and take a look at our shower which has been leaking since 1824, and that I have been putting off getting fixed for almost as long, so couldn't go immediately and played it cool. Gnnnnnnnnnnrrr! Then it was time for the school run, no problem, the bird was still there, and a Brent Goose on Purfleet with the Canadas (remarkably another Rainham and London tick). I hadn't counted on an accident on the A13 which backed traffic up the North Circular. Four o'clock came and went, I idled near the Beckton Roundabout. Still there! Gnnnnnnrrrrr! 4:15 and I was steaming into the car-park, commando-rolling out of the car (no mean feat with two children). It was nearly dark. I rushed into the centre. "Get out there, get out there, what are you doing?!" screamed Howard, almost as excited as I was - the Brent Goose had just flown onto the river. I plopped Pudding under my arm and rushed out on to the sea wall. Yes! Still there! Tick. OK, where's the Bunting? Finally found it in near darkness, still feeding on the old sea wall, though further away than it had been previously. We were able to approach to within about six feet, the bird showed no fear at all. I think the kids were genuinely amazed. Pudding pointed at it and said " 'now buntin' ", that's my girl! So, by the skin of my teeth, two London ticks in twenty minutes, superb. I should really have seen Brent in London by now, but Snow Bunting is a quality London bird so I'm pleased I managed to connect with it and get such good views, even in the gloom.

Rainham had been so brilliant that I decided I would spend the whole of Tuesday there. Mrs L was working from home, and despite the opportunity this presented to feverishly dust and clean under her approving gaze, watching the BP counter rise and rise to perhaps close to zero, the lure of birding was too strong. And a good thing I succumbed too! First stop for Pudding and I was Aveley Tip, and loads of gulls. I am not a Gull-fiend, but in my quest for Caspian Gull - a life tick no less - I have been spending hours up there. This is not the greatest destination for small children, so my visits, though numerous, have been brief. Believe it or not the children do not shout "Daddy, can we go to the fragrant tip and look at Gulls again?" particularly often, so I have always combined it with something slightly more fun, like sausage rolls at the visitor centre followed by the playground. I had therefore repeatedly failed in my quest, whilst Andy, a Gull addict and Rainham regular able to spend hours up there has seen something like eight in the last two weeks. Plus he is good at Gulls, which helps. Today was to be my day though. It was bitterly cold, and having gone through the birds on the tip several times for a paltry two adult Yellow Legged Gulls (I would not be able to find a juv....), I turned my attention to the birds on Wennington. "Hello hello, what are you then?!" I found a bird immediately, an adult, that though distant looked really really good. Pure white, pear-shaped head, a beady black eye, very pale grey-yellow and parallel-sided long bill with no obvious gonydeal angle. I could not see the legs, but it was standing tall, and though large, appeared slim at the same time. Convinced I had nailed one, I excitedly called for reinforcements. Unfortunately H could not get away, so he listened to my description and said to take as many photos as possible. Ah, problem. Not to worry, I am world-class when it comes to phone-scoping, the quality has to be seen to be believed. 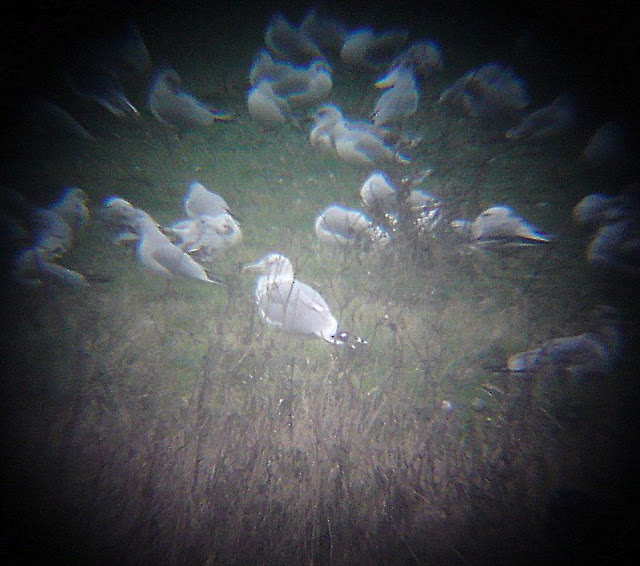 See what I mean?

Back in the centre, warming my numb hands, I nervously showed Howard my best effort, and it passed the Cachinnans test! I would have felt bad showing him a funny Herring Gull, but I knew I had a good one. Hurrah, and....tick! After a celebratory cheese toastie, Pudding and I were about to head out on the reserve when I noticed a number of Gulls go up. Bins ever at the ready, I picked a small dark falcon absolutely tanking it low across the reserve. It landed on a post and when scoped up there was nothing about it that didn't suggest female Merlin. Ker-ching! Yep, another London tick. And an Essex tick! And a Rainham tick! Good thing I keep lists for those three.....Amazingly I have racked up four for London in the last two days. I am still at the very bottom of the London "league table" but that is fine, I like it that way, and every new bird will be a small victory until I can finally move up to.... penultimate place. I can scarcely wait!

Today is Wednesday, and no birding was planned. But such is my amazing good fortune of late that whilst opening an upstairs window this morning a Pied Wagtail flew over the house calling, which was garden tick #54.

So, in summary, as I know you care:

By my reckoning that is fifteen ticks, that is to say, I have had to add fifteen new lines to various lists, and all since Sunday. Exciting stuff, I'm off to have a lie down.

Posted by Jonathan Lethbridge at 11:05