Right, I am on a roll. Today I'm going to do what I promised back in January when this whole blog thing started - a tour of Wanstead Park. This is only part 1 because it was a bit wet and windy today, and I was too much of a wuss to go round the whole park, so this is the southern and western bits. Part 2 will be the northern and eastern bits, including Warren Wood, the Old Sewage Works (catchy eh?), and the Ornamental Water.

One entrance to the Park is quite close to where I live. Nine times out of ten I go out onto the Flats, but when I do give the Park a bash, this is where I start. 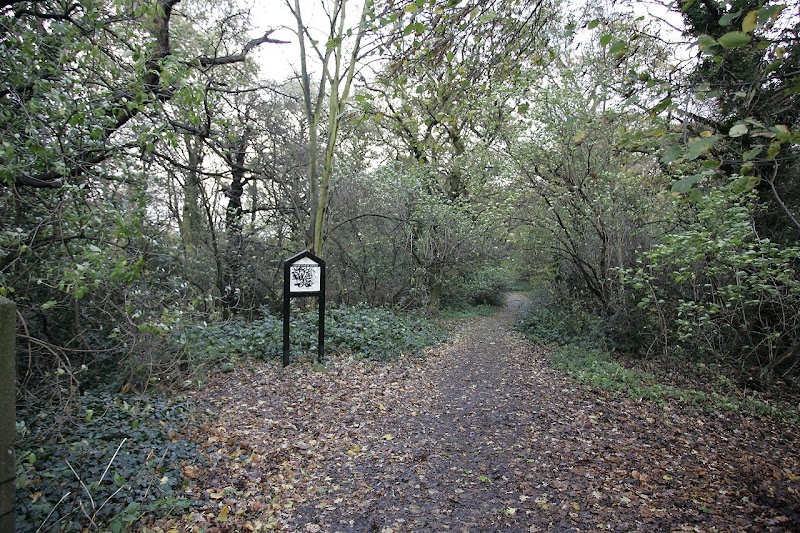 Entering through the Blake Hall Road gate, you immediately go down a steep slope, and are in Reservoir Wood. The slope is what was the old bank - when you exit the wood from the eastern side, you pass through a kind of cutting, which was the other bank. I have no idea when it ceased to be a reservoir, but it must have been ages ago as the trees in the wood are massive. It is alive with Great Tits and Blue Tits, and is the site of my recent Treecreeper, a bird previously only known in Wanstead from the fossil record. 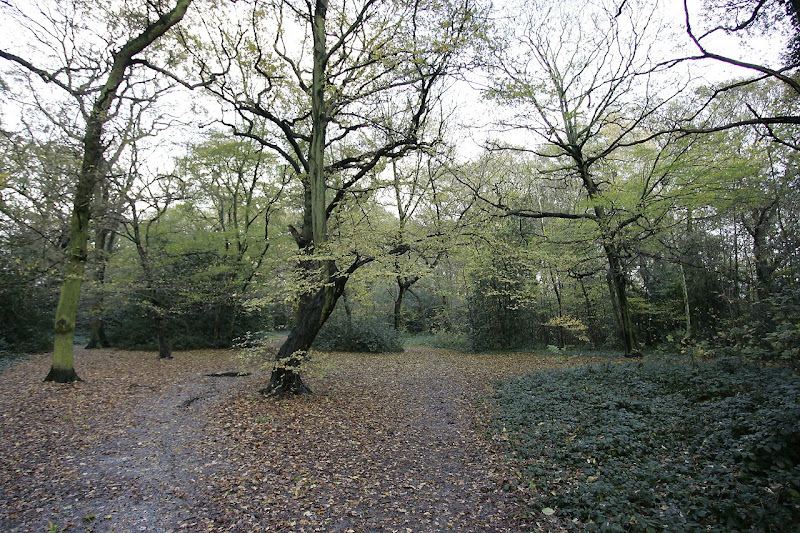 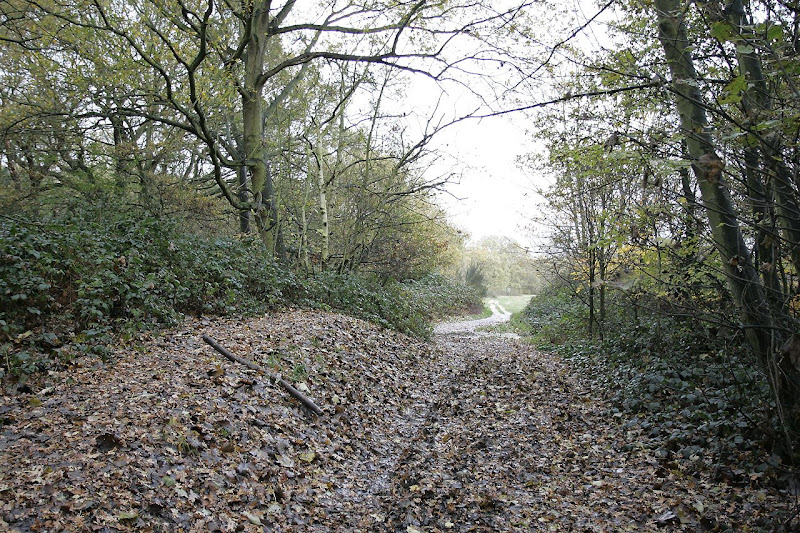 Leaving Reservoir Wood from the east, the first pond you come to is the unusually-named Shoulder of Mutton Pond. This never has a great deal on it, but it does have the only patch of reeds in the entire park, which you can see on left-hand side of the photo below. So far this has remained steadfastly acro-free but I live in hope. 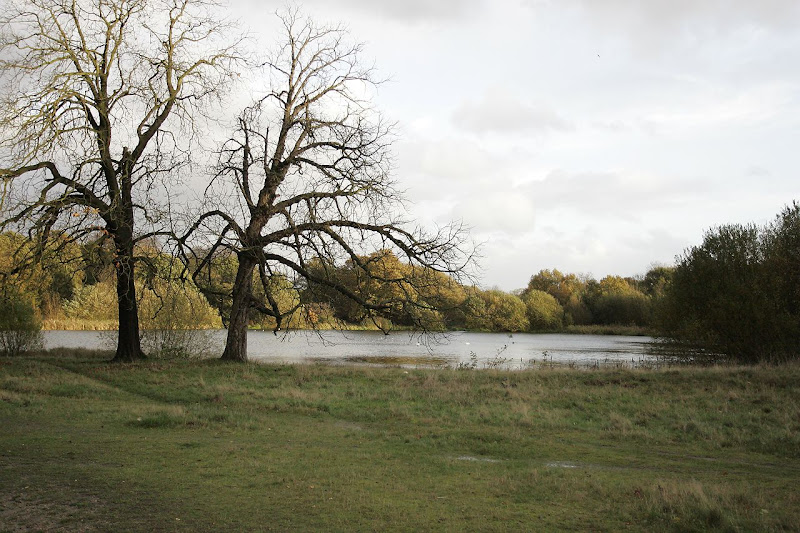 Shoulder of Mutton. I've not seen it from the air, but I'm sure it's close. 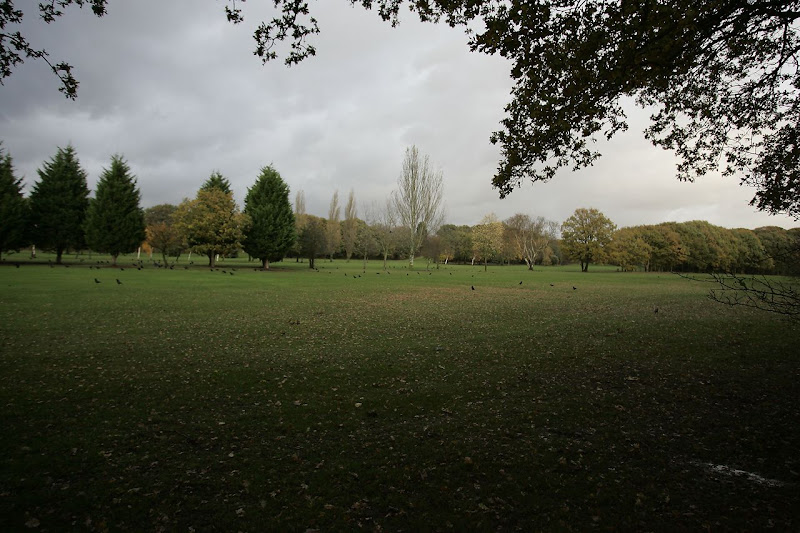 The Golf Course borders the northern edge of the park. It is out of bounds, ahem, and bordered by a sharp but slightly incomplete fence. Rumour has it that there are a few birds here, including quite a lot of Jays, good numbers of finches and Pied Wagtails, and best of all, a deep lake called The Basin, which will one day attract a Smew. I am told by a correspondent that the best time to look for birds on the Golf Course - from over the fence of course - is early in the morning when there is nobody else there. Later on in the morning various brightly-coloured oddballs walk all over it flushing everything in sight. Honestly, what a stupid hobby.

The next pond you come to is called the Heronry Pond. Though not the deepest, when it got really cold at the start of this year, this was the only water that remained open, and so all the waterfowl congregated here, including two displaced Iberian Red-Crested Pochard. That was an exciting morning, but I digress. 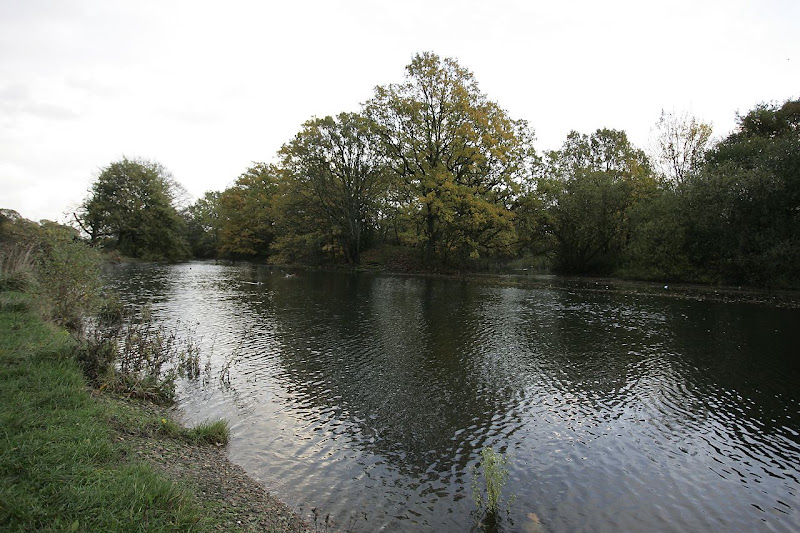 This is where the Little Egrets were earlier this year. 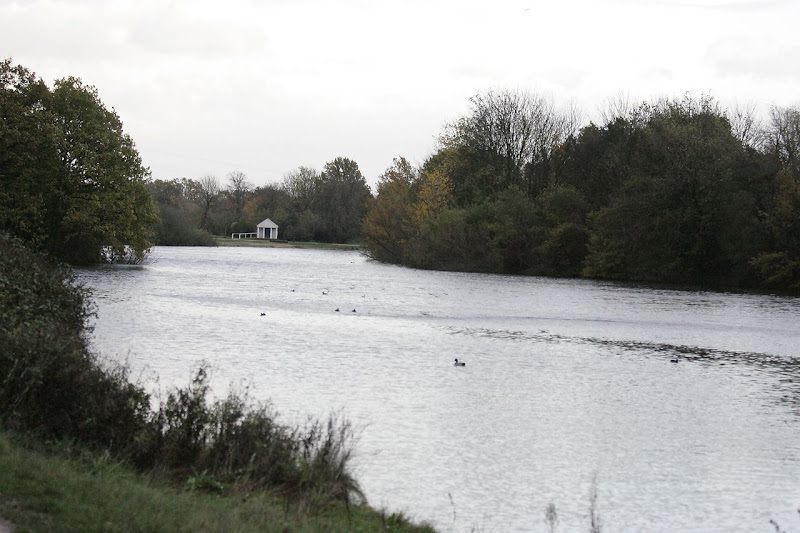 Heronry from the West, looking East towards the TEA HUT OF HAPPINESS.

Heronry starts off thin, and then fattens out into a fairly broad lake, with a concrete end. In fact it is concrete-sided all the way around, but mostly it is not obvious as there is a lot of overhanging vegetation. There are also a couple of islands, but no Heronry. This is Coot central, though pleasingly there were not many on here when I went round today. Several pairs of Little Grebe breed, and in winter there is a healthy population on Tufties, Gadwall, Pochard and Shoveler. I once had a Ruddy Duck on here until I shot it. 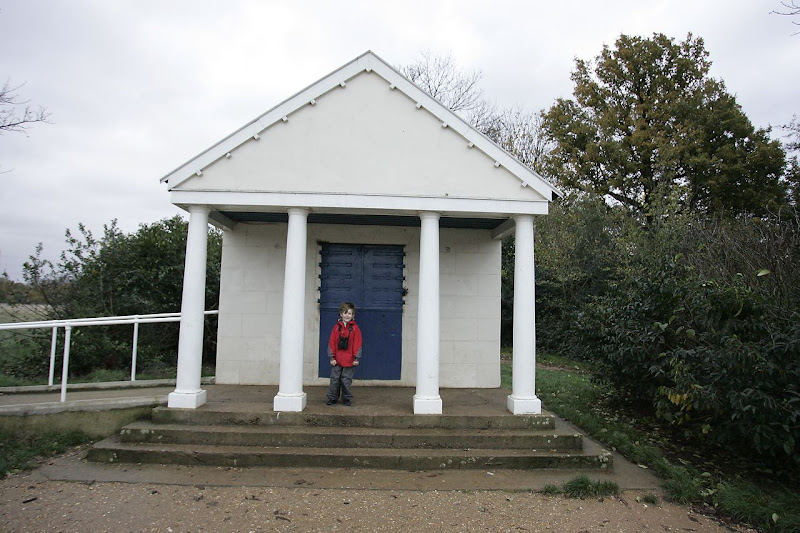 THE TEA HUT OF HAPPINESS (closed)

Ah, where to start. The Tea Hut. The opening hours are steeped in mystique, but when it is open, you can get a proper tea. In a mug. No styrofoam here, a proper chunky mug, which you are allowed to carry away from the hut to nearby benches to continue scanning Heronry for rare ducks. Or Coots. They also sell cake. Carrot Cake, Chocolate Cake, Coffee Cake, Bread Pudding. This is beyond wonderful, and it is often tempting to head straight there, forsaking the rest of the Park. You need to remain resolute, and carry on past it, as you don't deserve it yet. No, only when you have walked the entire circuit of the Ornamental Water and Perch Pond are you allowed tea and cake. What do you think this is, the Scillies? 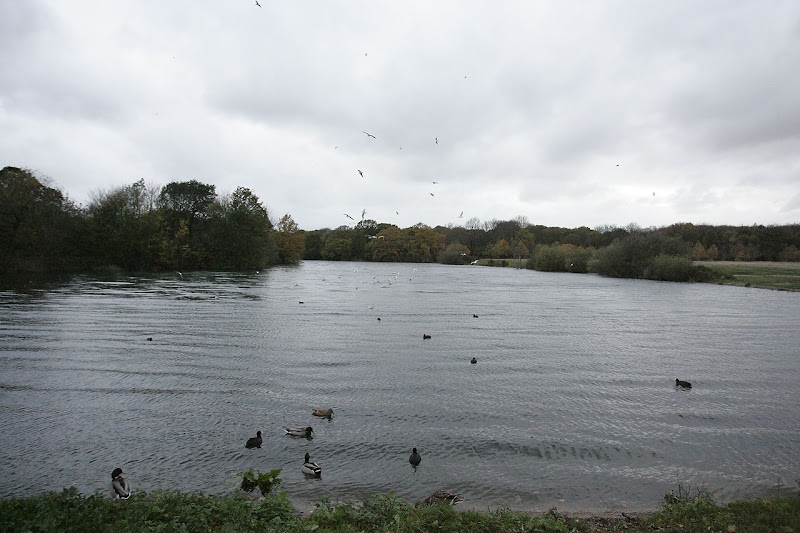 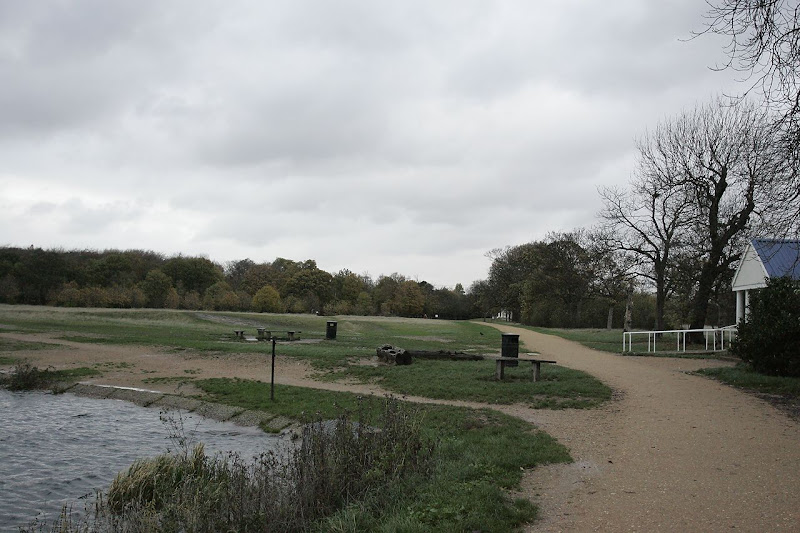 Looking north from the edge of Heronry, past the Tea Hut, you see the western half of The Plain, and behind it, Chalet Wood. I saw my very first Lesser Spotted Woodpecker in the distant large tree directly above the right-hand litter bin.

The Plain is the part of the Park most like the Flats, that is to say, rough grassland with a few bits of broom. I have never seen Skylark here, though Meadow Pipit is a possibility. I think the proximity of the Tea Hut is to blame, as you get loads of fatties hanging around scoffing cake whilst their offspring run riot nearby. 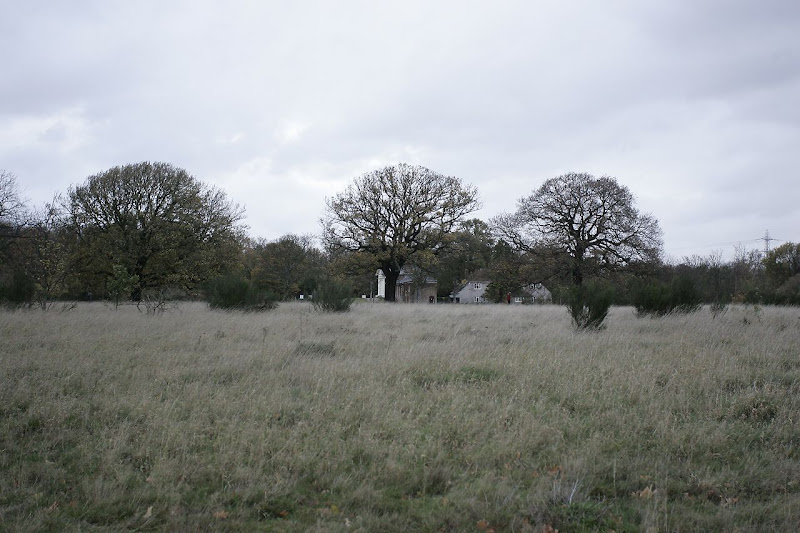 The eastern half of The Plain, with the Temple and the keepers lodges in the background. The Temple is not a temple, it is just called that, I don't know why. I think it is one of the remaining outbuildings associated with Wanstead House. Sometimes they have dull exhibitions in there, arrowheads and old bits of farm stuff. 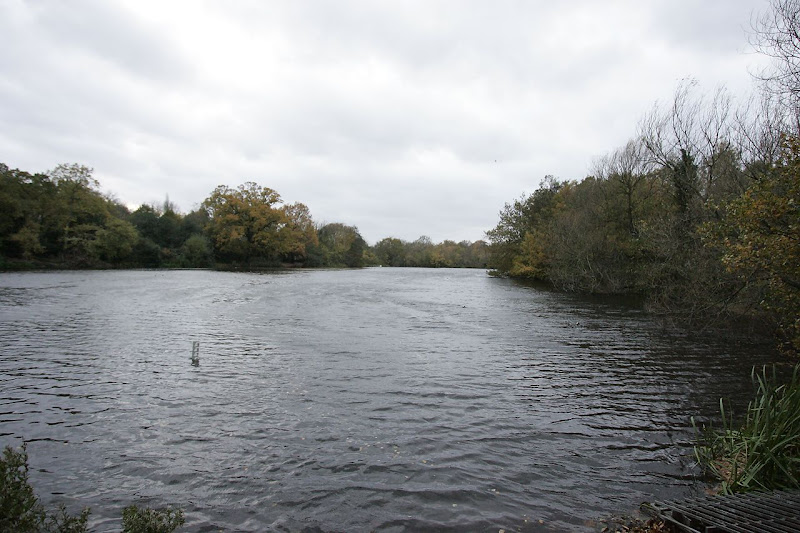 Continuing east, you get to Perch Pond. This is the deepest pond in the park, and probably holds more Pochard than anywhere else. It is also the most likely to get Great Crested Grebe. It got a couple of Goosander last year. I didn't see them, so Perch Pond is pretty dull in my book. The western end, closest to the Tea Hut, is a network of small channels and boggy bits, and is the best place to find Water Rail. On the other side is a boggy depression known as the Dell. An overspill from Perch (the grate, above) creates a little stream which winds through here, under a bridge and into the southern tip of the Ornamental Water. Today though it was a raging torrent, and all the Woodcock I was certain would be there had been washed away. 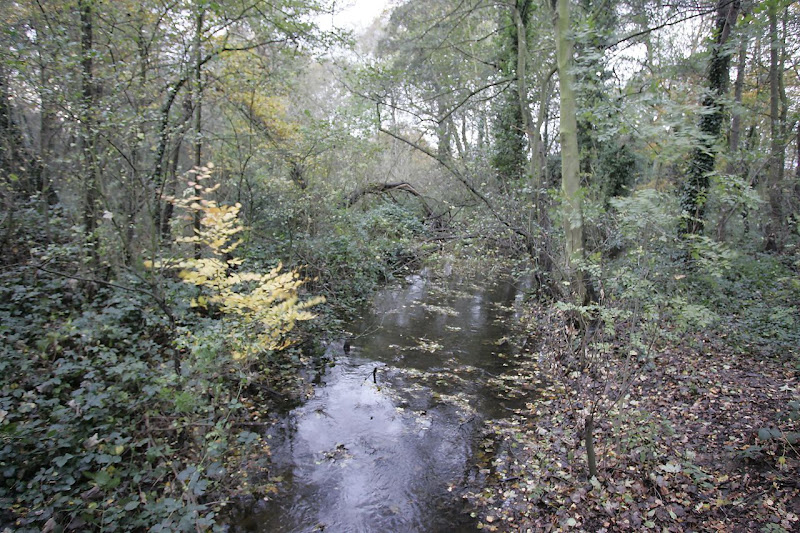 There is a little brick bridge between these two photos. 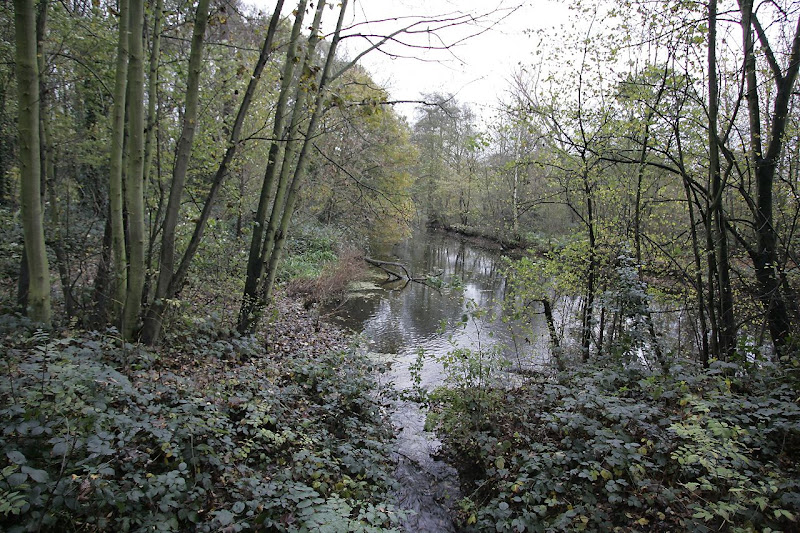 The start of the Ornamental Water

As you stand on the bridge, the Ornamental Water stretches north. It is a very thin wiggly bit of water, with one long rectangular vista roughly in the middle. At the top end are two large islands. To the west of these islands is some dense Woodland, Warren Wood. To the east is the North Circular. To the south is the Old Sewage Works. All of these goodies will feature in part 2, as well as a map.

Posted by Jonathan Lethbridge at 21:00