He's behind you! Possibly. Or possibly not. Depends if you look or not.

Oh no he isn't! Yes, it's Panto season. We went yesterday, courtesy of the Grandparentals in Cambridge. I had been dreading it. Slapstick humour, pathetic jokes, screaming children, and someone out of Eastenders - I have all that at home, apart from Bianca. In the event it was superb - what I hadn't reckoned on was it being a Footlights production - Ali Baba and the Forty Thieves. Where else but Cambridge would you get a panto that mentions Schrodinger's Cat AND gets a laugh? From start to finish it was a cut above, and entirely put together by and starring students. It was so good that I strongly suspect that they have not been concentrating on their academic studies a great deal, but then presumably this is where having two brains each really comes into its own. The villain and the panto dame (a bloke, naturally) were the stars of the show, and frankly if we don't see them again in some guise I'll be amazed - the list of Footlights alumni is long and distinguished.

Anyway, enough cultural stuff, back to birding. And getting wet. The weather today has been awful, but being hardy and tough I ventured out into the pre-dawn. Before I had even got to the Flats I was assaulted by hailstones and thunder, and my first proper soaking occured about ten minutes into my [unsuccessful] hunt for Woodcock. I got diverted by a boat-load of gulls on the field west of Lakehouse Road, including a pesky large-and-dark-looking Lesser Black-backed Gull that gave me the run-around before revealing its true identity. Overall I counted over 400 Common Gulls, over 300 Black-headed Gulls, 77 Lesser Black-backs, and 17 Herring Gulls. Amazingly there wasn't a single rarer gull in there. Only a matter of time before I get a Med surely? All this counting took a long time, during which I got wet again, as horizontal rain swept across the playing fields. At least it kept the gulls in one place. I partially dried out on the way to the Park, and bumped into Stuart by Heronry Pond. He too was looking wet. The Tea Hut of Happiness was disappointingly closed, so no fix there. A dog-walker asked us if we were twitching something. As if! I am a patch-worker. He was only wondering, he said, as he had seen a load of people up at the top car park carrying scopes and everything. Eh? A twitch? In Wanstead? What the? We hurried up there as fast as our little legs could carry us and sure enough we found a large group of birders. Not a twitch, but an ELBF guided walk in Wanstead Park looking for Lesser Spots. It was being led by Roy, and he had already scored with a flock of 30 Redpoll sp in the southern corner of Warren Wood - easily the most I have ever heard reported here. Maybe there was a twitch on after all! We were saved this ignominy by the Redpolls having the good grace to fly over our heads as we were stood there chatting. Most impressive. They didn't linger so I didn't get to check them, and I am being good by calling them Redpoll sp. No doubt they were all exilipes. It rained again just after this. 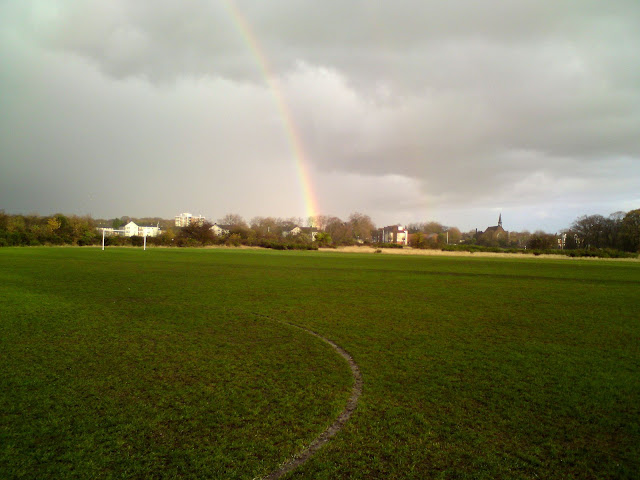 A brief break in the weather

We carried on to the Basin to check for rare waterfowl, but all the sawbills had been replaced with Coots. At this point we got wet yet again. I was OK actually, fully kitted out in wellies, waterproof trousies and an extremely waterproof jacket designed for fishing, but Stuart has a more cavalier attitude to repelling water. He doesn't bother doing his coat up, he doesn't wear a hat (instead water just bounces off his head), and one of his boots has recently developed a leak. None of this puts him off in the slightest, he is unstoppable. A birding machine. Hunger was setting in, but I decided that one last check of Reservoir Wood might pay dividends as the sun had decided to come out. Sure enough, not long into the wood and I heard the piping call behing us. A female Firecrest flitted out of a holly and proceeded to bounce around the understorey giving good views. A bit of quality pishing sent her, and we think the male as well, beserk, and for two minutes we were captivated by a holly emanating with Firecrest calls, with occasional glimpses of the bird, before it or they got bored and zoomed off somewhere else. Got the Coal Tit in with the Long-tails as well, so a sucessful final roll of the dice. On the way home the heavens opened.

I appeared on my doorstep at around 11 doing my best impression of a drowned rat, collected scope, banana and orange, and headed off to Rainham to see if I couldn't repeat the Firecrest experience with the Serin. Halfway down Coldharbour Lane I spotted Hawky, so I stopped to say hello. He had just found a Dartford Warbler with his Dad, Roger. I wasn't twitching it, I was stopping to say "Hi". Moments later a White Van screeched up, performed a dodgy parking maneuvre, and out jumped Shaun and Monkey, twitchers extraordinaire. Shaun had been out early working his patch in a dedicated manner, and after four hours of hard graft for little reward had decided to give Rainham a crack. Oh no, my mistake, he had been lazing around in bed, listening to the sound of the rain on the windows and drinking tea, with his phone switched off in case work called. Monkey too had been busy working his patch. Oh no wait, silly me again... Pleasantries were exchanged about Hawky's Wren, the piss was taken - a lot, as is customary, and as sometimes occurs on this blog -, and then a Dartford called and popped up, just as we all knew it would. Another cracking find - expect a stunning pic on his blog later. Hawky and I may try and do a yearlist for Rainham next year. If we do, I fully expect him to whoop ass.

Monkey switched cars and he & I went to the Serin mound; I think Shaunboy went back to bed, and Hawkins pere et fils went home for lunch. We gave the Serin at least ten minutes, and then got bored. Monkey went home to bed, and I may have had a small and slightly illegal excursion up on the tip in search of Red-legged Partridge and Corn Bunting, neither of which I may not have found, but I might have got wet again. Got a Water Pipit on the foreshore near the barges but that was the best I could do. By this time Bradders had turned up and jammed in on both Serin immediately. Curses! Or should that be "Booooo! Hisssss!!"? I joined him on the path again, got rained on AGAIN, and in a brief (and final) period of sunshine, finally laid eyes on one or both Serin on the slope in front of Wennington. Got back home at three-ish, highly bedraggled, and had a nice cup of tea. A proper day of birding, and a couple of heard-only's converted to proper ticks. I did draw a Barred Warbler by the way, and a Wigeon, neither of which turned up, so the Birding Gods are clearly otherwise engaged. 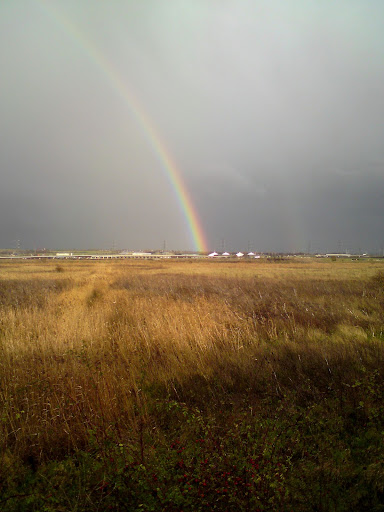 Another brief break in the weather

Finally, some of you may have noticed a post entitled "London Listing" which appeared briefly here on Friday. Some of you may have been lucky enough to read it. If you did, Shhhh, don't say anything, it will reappear. It was a good one, topical, and full of gags at the expense of cheats people whose lists appear not quite whiter than white, but I have taken it down again. Things are afoot, and for now I must remain silent on the matter. Just remember kids, Norfolk is not in London.

Posted by Jonathan Lethbridge at 20:14