Some time ago, in my first post in fact, I promised that seeing my 100th species in WANSTEAD would be marked by large font, capital letters, and stuff like that. That happy day has at last arrived! Following up on a report of Firecrest in Reservoir Wood, which is at the extreme western end of Wanstead Park, I encountered a large tit flock. No Firecrest, but better still, a Treecreeper - a species thought absent from the area, missing for several years. But it gets better, for Treecreeper was only #99. Yes, that's right, a two tick day! I was so stunned to get the Treecreeper that I momentarily forgot about the tit flock, and had to track it down again. When I finally did, what should flit through my bins but a Coal Tit! Yay! Pathetic though it may sound, a humble Coal Tit was tick #100 for my patch list. Following on from the Dartford Warbler on Saturday, that is three ticks in three days. 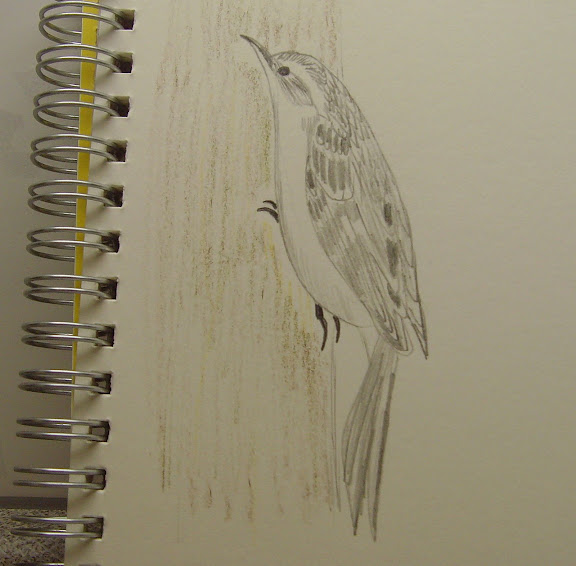 Have started trying to draw birds again. It has been about 25 years.... Really difficult, even with a book for reference. I have the utmost respect for people that can do it in the field, or from memory, just like that.

Can I keep it up? Well, there is still a high likelihood of a Firecrest, either the one reported, or another, as there is loads of suitable habitat both in Bush Wood and in the Park. And I reckon a Yellow-legged Gull is due on the Flats playing fields. Lapwing, either on the playing fields, or as a fly-over, is a distinct possibility too. And why not Golden Plover? Or even a Dotterel? OK, I am getting carried away with myself, but the Treecreeper this morning is what patch-birding is all about. I experienced anew the thrill of discovery, bringing back birding memories of yesteryear. Highly recommended!

Posted by Jonathan Lethbridge at 17:17