A quite excellent and extremely irritating post by Gavin Haig has forced me to abandon my planned next post and instead write this one. It concerns ticking dilemmas. I discovered his most recent Not Quite Scilly post at around midnight just as I was heading off for bed, the title didn't have portents of doom, so I had a look. No doubt a short tale of seeing no Grey Phalaropes which would cause me to nod off in no time at all, I thought. Far from it. I was forced to read and re-read it many many times, and then ended up composing a comment that was perhaps longer than the original post, soul-baring, and highly contradictory. This took an hour, and then I couldn't sleep. When I woke up this morning I realised that the ideal place for my rambling, insightful and contrary musings was in fact my own blog. No matter, with kind permission I have stolen the general prinicpal, which was a list of hypothetical birding situations that Gavin had quickly and cleverly invented, and asked how many out of ten would you tick? My answers varied between four and seven, and when I woke up this morning it was as high as eight, and my total answers added up to eleven, so I have had to go back and comment again. The situations have been cunningly woven such that when you are happy with one answer, you then have to go back and start again on all the others. Ad infinitum. I didn't get to bed until 1am and then lay there wide-awake thinking about the ticking ethics for Corncrakes. This is blogging as it should be, surely? Thought-provoking and sleep-preventing.

So, rather than some highly hypothetical situations that Gavin has never had to deal with in real life hem hem, here are some real ones. These birds are all on my list. The question is, would they be on yours? This is my laundry list. Aired.

1) Barred Warbler
A very large and long-tailed warbler that was obviously the right colouration bombed past me and dived into elders never to be seen again. I was with the finder at the time, and we agreed that that was "the boy". A short while later I heard the machine-gun call from about 30m away. Life tick, with a 'better views desired' annotation.

2) Blue-cheeked Bee-eater
Yes, this is a bvd species. Kind of. Frankly it has not had a mention on this blog for a long time, so I'm tempted to underplay the views I had simply to be able to talk about it again. A lot. I saw it you know, what a bird!! When the news broke I was shopping with the girls. I should have abandoned the trolley and gone straight for it. Then I would have had a good hour looking at it perched up in a bush. As it was I continued shopping, went home, labouriously made a picnic, and then left. I made it by about 30 seconds. As I was pushing the buggy down the hill towards the line of birders, a Bee-eater flew across the field, over and then behind me. Against the light, I saw the long tail projection, and dark buffy underwings. It called a few times as it flew, swallow-like, over the field, and then had the good grace to go to France. Ideally it would have stopped in a bush next to me for a few moments, posed for a photo, and then continued to France, but you can't have everything. I ticked it, gleefully, but secretly I wanted better views. Ho hum.

3) Capercaillie
At Loch Malachie in late summer a few years ago, I heard a female calling from somewhere up ahead. I attempted to creep along the path and was rewarded by a large brown bird's rear end disappearing rapidly through the forest. A bum view in more ways than one, but I ticked it as a lifer anyway. Since then, I have never had a glimpse, but have heard two males. One of these became a year tick for 2009.

4) Corncrake
This is probably familiar to many people. I was stood on the edge of a the fire station field on Iona, and at least three different crakes were rasping away. I phoned a friend. "Do I need to see it to tick it?" Vince replied "Yes definitely, of course you do". I phoned another friend. "No doubt about what you're hearing, go for it!" A much better answer, but I decided to give it a bit more time. A short while later, right the way across the other side of the field, a small gangly bird flew in a highly pathetic way low across the top of the grass, before dropping back in. It was so quick I didn't get bins on it, but it probably was one. Then, just as I was about to walk back to the ferry, I became aware of something peering out at me about 20m away. As I raised my bins, it turned tail and vanished into the grass. Another one? I felt I had enough for a tick.

5) Fan-tailed Warbler
I just missed out on Fan-tailed Warbler in 2008. I arrived on site just as it flew away never to be seen again. Another birder attempted to get me on to the dot, but failed. This solved an ethical dilemma for me at the time. Would I have ticked that dot, knowing that was it, but not having properly seen it myself? At the time it was the fifth British record, a real mega. My conclusion was that I would not have ticked the dot, although that was an easy one to reach having not seen it. This year another turned up in Kent and I went to see it. After two hours and no sign, I was about to give up when it flew over my head, went "Dzip", and flew into a bush. I saw no real detail whatsoever. It then flew out of the bush, hovered briefly, giving a very strong impression of a Fan-tailed Warbler, but without giving me the opportunity for any detailed scrutiny, and then disappeared again. Given that this was infinitely better than last year, I ticked it, but still have it as a 'bvd' species. If you want to annoy me, just say it was a Dunnock.

6) Golden Pheasant
I saw two of the Wolferton birds one early morning in February, and happily ticked them as a lifer, dead chuffed I had managed to actually find some on my own. Later on, I learnt that this population of darker birds might not be particularly kosher, and in any event are always seen in exactly the same place. I did not rescind my tick. I have since heard birds in the Brecks, but never seen them.

7) Little Bunting
In Sussex earlier this year I just managed to see what basically looked like a small female Reed Bunting before it zoomed back into the gorse in which it had been hiding for ages. I saw it for perhaps 4 seconds. I never heard it call, but everyone there said it was a Little Bunting, and a few people heard it give the appropriate call. I ticked it, and have been seeking to make amends since. Sadly I've dipped every time.

9) Mealy Redpoll
I have yet to see a 'classic' Mealy Redpoll. All of the ones I have seen have been obviously different from the accompanying presumed Lessers, but have not been as clear-cut as photos I have seen on the web. I really want to see a properly cold-looking one. I came very close in Norfolk at the beginning of the year, but it wasn't enough to take off my annotation. Seeing as I'm airing laundry, I once called the pager company with 100 Mealy Redpolls on the basis that most of them were the same, and there were a few much more browny ones in there too, my theory being that they were cabaret so all the others had to be flammea. A large flock of Mealies had been reported from that location earlier on, which was what I was looking for. Oops. The age-old of issue of seeing what you expect to see and not what you actually see. Call it over-excitement. Or stupidity. Redpoll ID is tough, but I'll get a really good one one day. I suspect one man's Mealy is another man's Arctic.

10) Red-throated Pipit
St Mary's, Scilly. In Longstones, up to my armpits in a huge pastie, one of these flew over and called. Howard and Bradders heard it, I did not. Pissed off. A few days later, on the Airfield after a Richard's Pipit, the same bird, or another, called somewhere overhead. I had done some scrubbing up after Longstones, and this time I heard it very clearly, but before I could wonder aloud, some of the assembled birders called it. Nobody ever saw it. Tick. A definite 'bvd'. Or perhaps just 'vd'? Cruelly, the Birding Gods gave me another chance at this bird only a short while later, and on my own patch too. Related here, I'm still annoyed about this, and probably will be for many years.

11) Scottish Crossbill
As I was hunting for Caper in the Caledonian forests, I came across two Crossbills, male and female, feeding in a small pine. I got excellent views and indeed photographs of their obviously chunky bills. They never called, like that would have helped me anyway. It is possible that they could have been Parrots, but I wanted a tick. Scottish is the easier one of the two, so I had it as that, and even managed to feel a bit virtuous for not claiming Parrot. 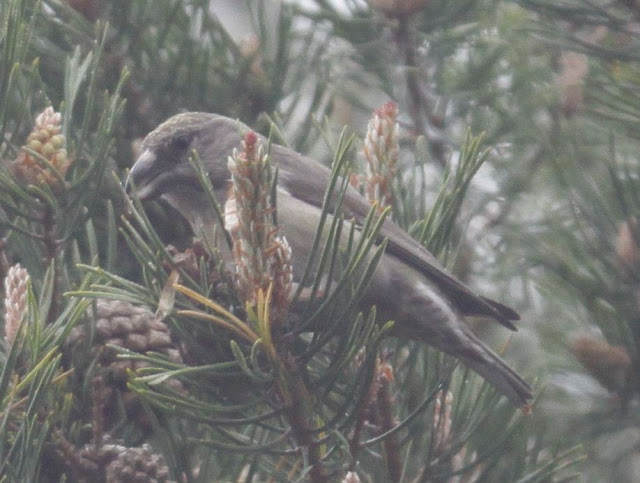 12) Short-toed Lark
This was bird number 300 for me this year, and a lifer to boot. I was with quite a few birders in a field in Norfolk, all of whom confidently identified this thing in flight. I would not have been so confident, though it was noticeably paler and smaller than the Skylarks it was bombing about with. That was pretty much all I could say about it though. On it went, with the increasingly familiar 'bvd' annotation.


So there they are, my dirty dozen. All twelve of them are on my list, and all of the circumstances described were for life ticks. What I want to know is how many of them you would have ticked? Please confess via the comments box. Please note that comments confessing to ticking fewer than 8 will be deleted. Ditto with any comments suggesting the Crossbill photo depicts a Common Crossbill.

EDIT: I almost had an opportunity to add to the list this morning, when a Leach's Petrel was reported from Staines Reservoir. I need this for London, however the bird was on the South basin and it was a really bright day here. I've been over there in similar conditions for Scaup and Velvet Scoter, and it was most unsatisfactory. Trying to pick out a small petrel in such light would have been really tough. I'm sure I would have seen a petrel, but conclusive views? Tick!! Luckily I'm at home with both girls today, and Pie point-blank refused to go, so we didn't, thus avoiding the issue.

Posted by Jonathan Lethbridge at 08:09