Before heading up to the Brecks, we decided to try a few spots in Epping Forest for Tawny Owl. You would think that remote spots in Epping Forest would be rather quiet in the middle of the night, save for the hooting of owls. You would be wrong. Epping Forest is in fact a hive of activity at 2am. Suspicious activity, quite possibly insalubrious. Not a word I use often, I've just looked up "insalubrious" in an online dictionary. Definitions include "not promoting health", "unwholesome", "unpleasant", and "sordid". I reckon I've hit upon the right word. About two minutes after pulling into the first carpark that we tried, we were surprised to see two cars heading out of the woods back to the main road. We were even more surprised when the second of the two cars pulled up behind us and turned its lights off. I must have had a sheltered upbringing. We left.

We were in the Brecks and birding before 3am. Against the backdrop of Sedge Warblers, we got both our target birds, Nightingale and Tawny Owl, and hit Lakenheath before sunrise. This was our first major stop, and by the time we left at 06:45, we were on 56 species, including the expected Orioles and Bittern. By the time we reached the coast just before midday, we were on 90, having ticked Mistle Thrush at 60mph. 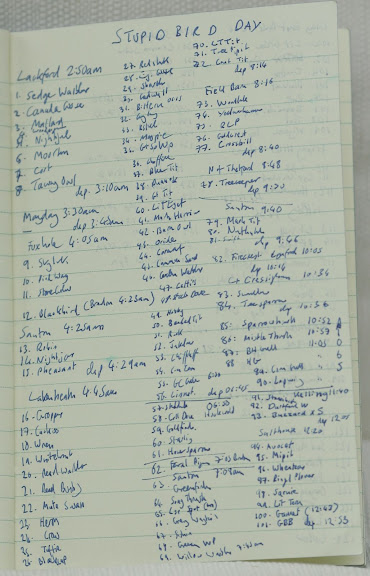 Bird #100 was a Gannet offshore at Salthouse at 12:53, where an amazing coffee from the little van put a spring back in our step. I'd been up for exactly 12 hours, and was feeling it. The coffee was sensational, and it was now we started to get a bit more urgent about it. Tick and run mode was fully engaged, but birds were becoming more difficult now. Luck was on our side though, as we picked up the Crane on Holkham Freshmarsh in under two minutes, and the Montagu's Harriers at the usual spot took even less than that.

We blasted into Titchwell on 120 at 14:12, scattering Tilley Hats off the path as we progressed to the beach. We spent an hour and a half here and cleaned up, leaving on 133 with a very late Pochard and a pair of Ruddy Ducks that we had somehow missed on the way in. We dashed down Gypsy Lane, jammed a Bullfinch and Kingfisher, before bagging the reported Red-necked Grebe. Hunstanton added Fulmar within tens seconds, and a flock of Bar-tailed Godwit within a minute, and a quick scan of the beach at Heacham finally secured a Knot, bird number 139 at 7pm. Could we make 140?

Missing potential birds at this stage included Jay, Corn Bunting, Golden Pheasant and Little Owl. We gave Wolferton twenty minutes but drew a blank, and then cruised some country lanes for Corn Bunting, but this late in the day, with a brisk northerly, something which had nagged us all day, there was nothing doing. Final stop Flitcham for Little Owl, make or break. We couldn't find one in the usual tree, but DB pulled one out of a more distant one for the 140th species of the day. The time was exactly 8pm and we had been going for nineteen hours. 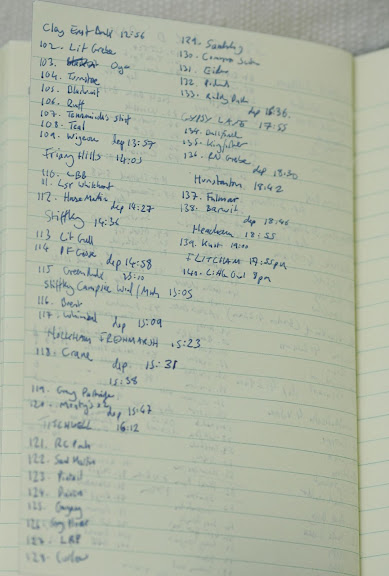 Somehow we made it home, and after dropping off Bradders, I finally collapsed into bed at 23:30. Easily my longest day in the field, surpassing by a couple of hours a crazy day in Scotland last year. 140 is a pretty damn good result given the weather and lack of any birds to twitch. The rarest thing on our list was probably Temminck's Stint, which in Norfolk in mid-May is indicative of extreme paucity. We never did get a Jay, nor a Yellow Wagtail. With better weather and a few decent birds on the coast, 150 should be achievable, but that will have to wait for another year.

So, a very silly day. I cannot explain it rationally, but I enjoyed it immensely. Bird of the day award went to two Otters which we watched feeding for over ten minutes in the Brecks, easily the best views I've had outside Bungay. A mammal tick was gained in the form of a Mole, flailing around on the surface on the path at Titchwell, and a butterfly tick, Green Hairstreak, at Friary Hills. Now I'm going back to sleep.

Posted by Jonathan Lethbridge at 17:30