I can officially announce I am done with year-listing. I broke the 300 barrier yesterday afternoon in the Field of Dreams. What a field! Bradders and I were continuing our year-listing quest in Holkam Pines, and had just seen a Red-breasted Flycatcher (may they never get boring) and a Yellow-browed Warbler (bastards), when the news came through of a Richard's Pipit at West Runton. We were headed there anyway so that DB could twitch, filthily, a Barred Warbler. Fine, all good, bit of bonus Anthus action for 299, let's go. Five minutes from the car and the Richard's Pipit went birding and found a Short-toed Lark in the same field. We strode on with renewed energy, could I really get to 300 in the space of one field?

We arrived at the field. Most people were staring at the Elder bushes around the disused pig farm, swearing at the hidden Barred Warbler. Didn't need it, whatever, so headed for the stubble, where we met one of the locals. Whilst casually chatting to him, the Richard's Pipit flew past calling, which was good of it. 299. We learnt from Mr Furze that there was also a Lapland Bunting in the field somewhere. Could DB, now on 297, also get to 300 in just one field? We wandered around the field for a bit, which was overflowing with Skylarks, Linnets and Meadow Pipits, before plonking ourselves in an advantageous corner for both the light and the gradient. About five minutes later a smallish very clean-bellied lark flew around our heads and disappeared again. Hmmm, probably, but need better than that. Luckily DB picked it up again a few minutes later, as had others in the field, and confirmed the ID. Gradually we pinned it down and got good flight views, though never on the deck. And that was it, 300, easy. I can still scarcely believe it. With DB on 298 at this point, I felt it was time to go home, but for some reason he insisted we stay. Oh, ok then, yawn. We wandered over to the farm buildings and almost immediately he jammed in on the Barred Warbler, being the only person to see it for several hours. It showed only to him, and promptly disappeared again for several hours whilst the exasperated waiters had to continue waiting. 299. A short stroll back across the field to where some people had found the Lapland Bunting feeding and he made it to 300 as well, probably within an hour of me doing so. Remarkably this happened on 200 as well - we were in Essex and I beat him to the mark by about 15 minutes with a Whimbrel (which he found), and he added Spoonbill shortly afterwards (which I found). So, all done, and we can both relax on Scilly, although I may not go as I don't need anything any more.

We had a celebratory sandwich back in Sheringham, and whilst contemplating our next move we found the funniest thing ever to be written on an Ice Cream van. It has meaning on so many different levels, we wished Paul had been with us. 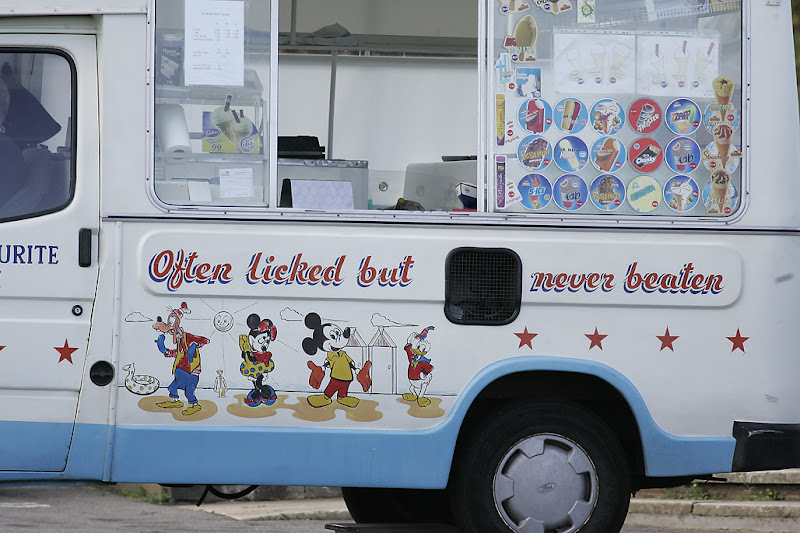 A sea-watch was abandoned after about ten minutes, and in a shocking move we decided we would go home and earn BPs with our respective wives. Luckily the pager kicked in and saved us from this ignominy, and instead we drove to Chosely drying barns for a juvenile Rose-coloured Starling. We got there, clapped eyes on it, and then it flew away. Result! Whilst we were looking at this we discovered that another Rosy had flown over a certain field in West Runton. Whilst we were pondering this incredible fact, a Buff-breasted Sandpiper was then found in the same field. Unbelievable! Luckily I took a photograph. 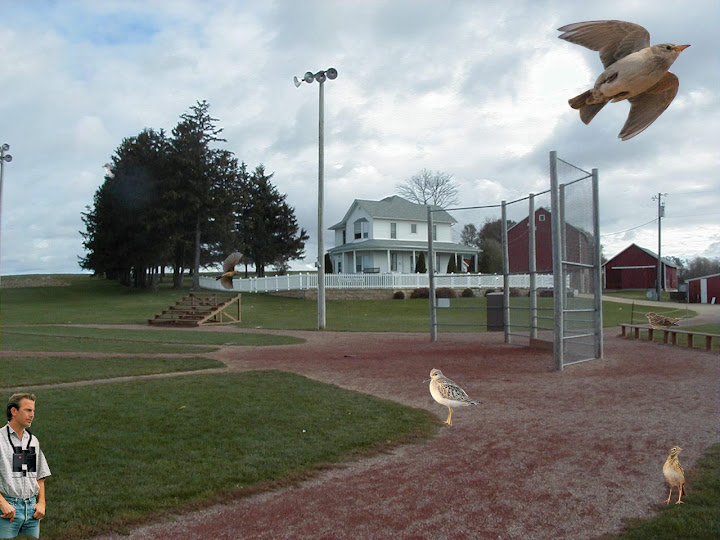 If you bird it, they will come

We didn't go back to West Runton for the Little Bustard that would inevitably be found feeding in the far corner that nobody had checked yet, and opted to go to Titchwell so that I could see a Jack Snipe. It was feeding out in the open about twenty feet in front of the hide, and once Bradders had dealt with the incredibly annoying photographer and the squeaky carrot toy he was using to irritate the Snipe, we got superbly intimate views of this normally skulking bird as it bobbed up and down in the margins. The use of squeaky chew-toys to distract a bird from doing whatever it is doing is a wildlife photography technique I had not previously been aware of. It also seemed to be fairly ineffective, but it would be quite effective for getting yourself thrown out of a hide with more militant patrons than those at Titchwell. And he had a stupid ratty moustache as well. If you're reading this, so sue me, you tit. 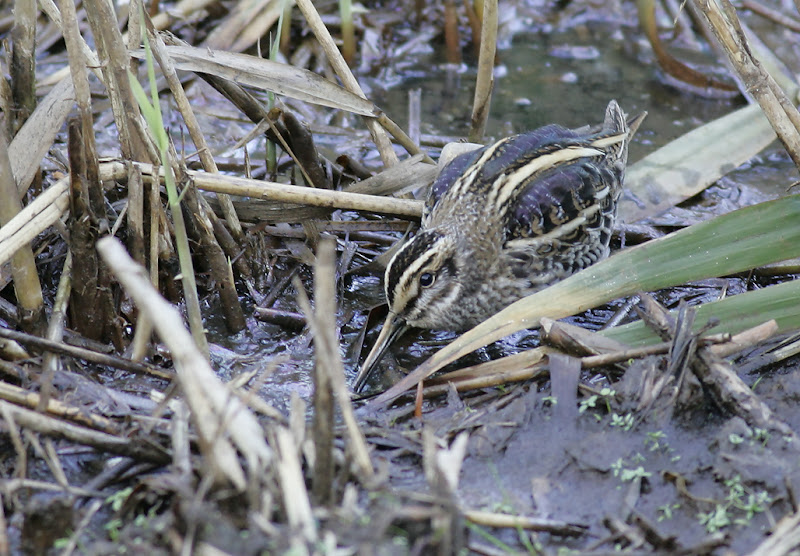 The purple sheen on the back is not photographic artifact, it did actually look like this.

After this we went home to face the music. Mrs B sounded quite cross. Mrs L had been well-managed, so a crisis was averted. Naturally she was thrilled I had finally got to 300, and celebrated by doing some sewing in a different room.

Posted by Jonathan Lethbridge at 11:46

Labels: Day Out, How to be really really Cool, Listing, Norfolk