Shikes are cool, that's the main reason. Little badass bandits that look disarmingly cute and fluffy. Supplementary reasons include the fact that there is significant species morphology. Today's Great Grey can be tomorrow's Lesser Grey, or perhaps even Steppe. Or yesterday's Red-backed could become today's Brown, although the reverse is also true. Confusion can reign for days over IDs, especially autumn juveniles, and sometimes the birds are gone before anyone works it out. I'm not claiming any taxonomic expertise whatsoever, as ultimately it doesn't matter - Shrikes are just cool. Which is why I got up at 4:45am and dashed over to St Aines to look at a Red-backe, er I mean Brown Shrike.

Badly misjudged the air temperature. Didn't wear a jumper and had really thin socks on. At one point I considered pouring my coffee into my shoes for the temporary relief it would bring. Frrreeeezing. Things didn't start so well for the seventy or so entirely normal and well-balanced individuals out on the moor at 6:30am, as low-lying mist prevented any birds being seen for a good hour and a half. But by 8, with the crowd having swelled to near enough a hundred, some people to my right claimed it had flown into a bush in front of us. We all rubbished this of course, they had only seen a Stonechat, desperation setting in already, losers. Entirely coincidentally I then picked the silhouette of the bird up in the top of what might have been the same bush....

Views continued to be dreadful for a little while and then all of a sudden the mist vanished and there it was, sat up where all could see it. A few people started talking about P this and P the other, sub-terminal markings and rounded lower-nostril coverts. Irrelevant - it was clearly a Shrike and that is all you need to know in order to gain enjoyment. Funnily enough though it was one I hadn't seen before, so I got a surprise tick. Bonus.

The great and the good were out in force, so I got lots of London Birder ticks as well. So did a lady filming the event for what will no doubt be a thoughtful and balanced documentary about bird watching and those who pursue this magnificent pastime. Vince and Steve B made up for their 2008 failure at Flamborough, and almost all the entire East London contingent managed to make it over during the course of the day. Fly little birdy, fly! Let's hope it stays one more night! 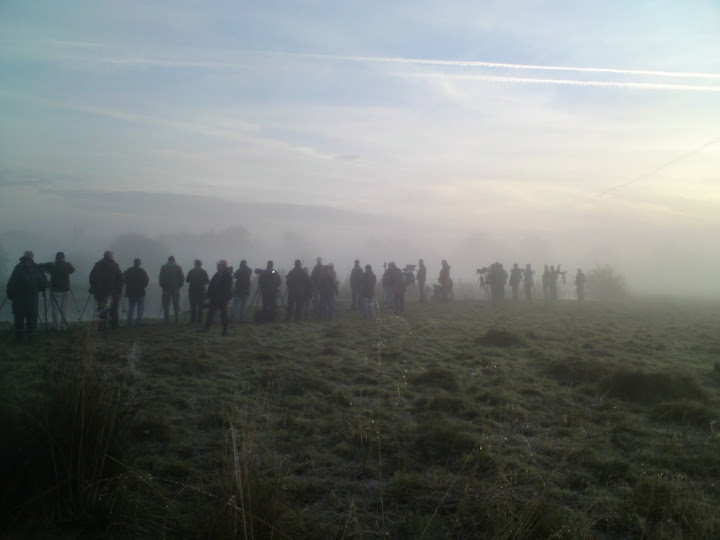 In a rare fit of proper birding, I came home and wrote up my notes before I went online to read all about the separation of juv Cristatus from Collurio. Wow. My conclusion?

Posted by Jonathan Lethbridge at 19:17