Day four and a new island. St Martin's, home of about 20 million fields each about the size of a tennis court, separated by thick pittosporum hedges - a hopelessly inefficient system, which is why most seem to be filled with weeds, but by golly it's good for thrushes. Our primary mission was of course to find a stack load of rare birds, but we inevitably wound up at Little Arthur's Farm where a Little Bunting and a Radde's Warbler had been seen in the past few days. The boat dropped us off at the farthest point from the birds, but the walk was pleasant enough. In fact there were so many distractions along the way that the walk took me about an hour an a half. The army of hopeful Little Bunting twitchers stormed away off the jetty, and before long I was totally alone, stuffing blackberries into my mouth at the rate of about one every five yards. I was also carrying the camera, so I felt I had to use it. No Sparrow or Song Thrush was safe. 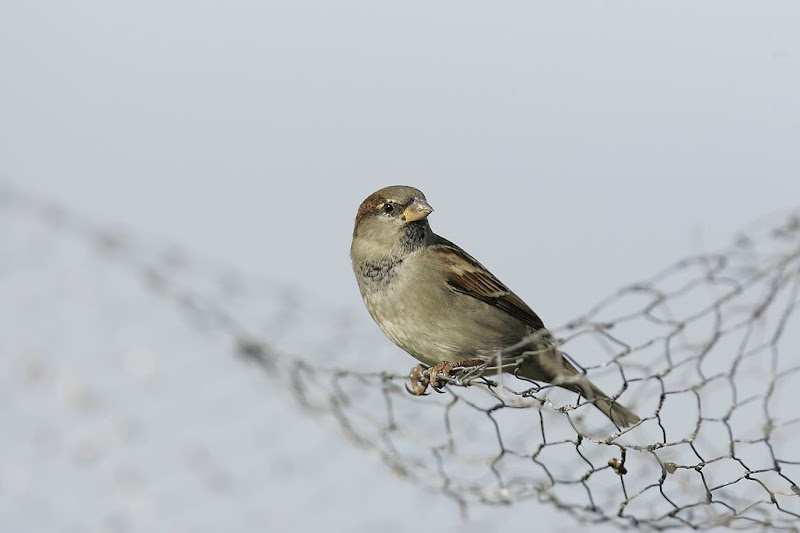 I eventually made it to the twitch, and was surprised to find that about half of the eager twitchers from the boat were missing. They never did turn up - they're probably still in a field somewhere. Stood around for a bit looking at an empty and badly-maintained tennis court, and was about to pack it in when a Yellow-browed Warbler called behind me somewhere. "Tsuee-eep!" This is one of those birding moments that happens to me very infrequently, and therefore merits full coverage (and bragging) here. Of a line of perhaps fifteen birders, only me and a bloke called Steve Arlow (he of terrible record shots...) turned round. I looked at him, and said "Yellow-browed?". He agreed. Now I'm pretty crap, and make no bones about it, but this is rubbish. If you're birding somewhere like Scilly in autumn, or in fact anywere vaguely coastal, you need to know this call. Hell, I bird Wanstead, which has never had one, and probably never will, and even I know it. Needless to say, it never called again, and we never saw it, but it was one, and I was able to proudly announce it at THE LOG, more of which later.

Shortly after this I gave up on the bunting, and went off looking for photographic opportunities. The most obvious seemed to be the Rock Pipits on the beach whilst I waited for the boat. Things started badly when a couple of birders walked straight past me and flushed my target bird within about ten minutes. They plonked themselves on the beach a few yards away, still not having noticed my prostrate form on the sand nearby, and started reading books. Nice. I heaved myself upright and tried another section of the beach. The pipits were actively feeding on the tide-line seaweed, so I kept low, positioned myself at a reasonable distance, and waited. Within a quarter of an hour, one pipit was feeding within about fifteen feet. It might have come closer, but a doddery old couple then walked straight towards my lense, and straight at the pipit, which understandably flew away. I may have made a gesture.... To be clear, I was not hiding underneath camoflague netting. I was not buried up to my shoulders in sand with only the camera poking out. I was sat in full view of everyone and everything, very obviously pointing a camera at a very obvious bird in front of me. And yet they made a beeline for me, and then expressed sorrow and surprise at having flushed the bird. Un-fucking-believable. Photographers generally get a pretty bad press, and sometimes for good reason. I am not a photographer by any stretch of the imagination, but in this instance I had applied fieldcraft and patience, only to have some ignorant/blind/give a shit couple totally destroy the opportunity I had created, and I was totally in the right. The old fool was lucky not to get a Gitzo in the face, I was really really pissed off. This was the first time all week I had made the time to properly apply myself, and a promising situation had been blown for no reason other than stupidity. Soon after that the boat came and so halfway back I threw the old git overboard. 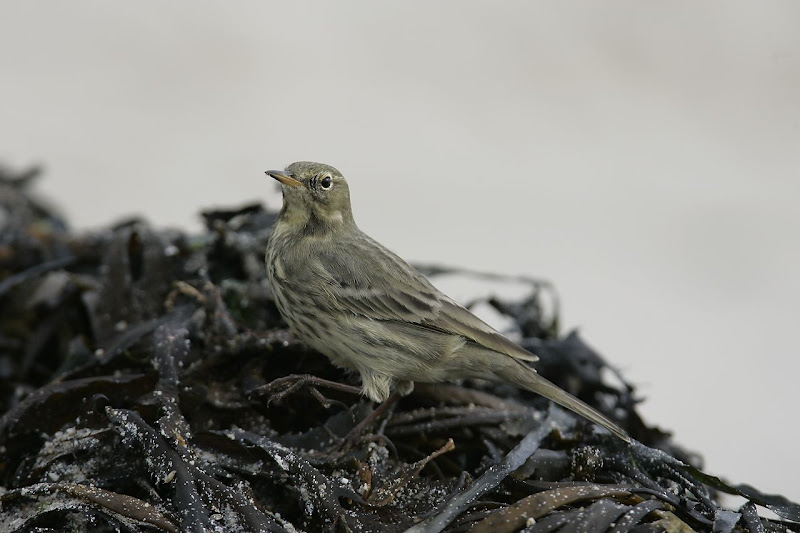 Back on St Mary's a Cattle Egret had arrived and was giving people the run-around. Once again eager twitchers zoomed off to Porthellick. Less eager twitchers like myself, Howard and Bradders meandered over there, but it flew off before we arrived. Hmmm, what to do? The bird seemed very unsettled, indeed some birders decided to just wait at a spot with decent all-round viewing and wait for it to fly over again, a strategy which soon met with success. We climbed a hill with much the same idea, but news of a probable Richard's Pipit had us scurrying over to the airfield, mainly in case it was not a Richard's Pipit. En route we encountered the phenomenon that is Dick Filby. RBA guru, CB demi-god, and all-round enthusiastic information hub. He strode along whilst we jogged behind, and in no time at all we found ourselves near the windsock looking at an unmistakable Richard's Pipit. Bugger. At least the Cattle Egret was decent enough to do a flyby over Holy Vale/Upper Moors, so we did in fact get both birds and thus rescued a fairly poor day on the scarcity front. 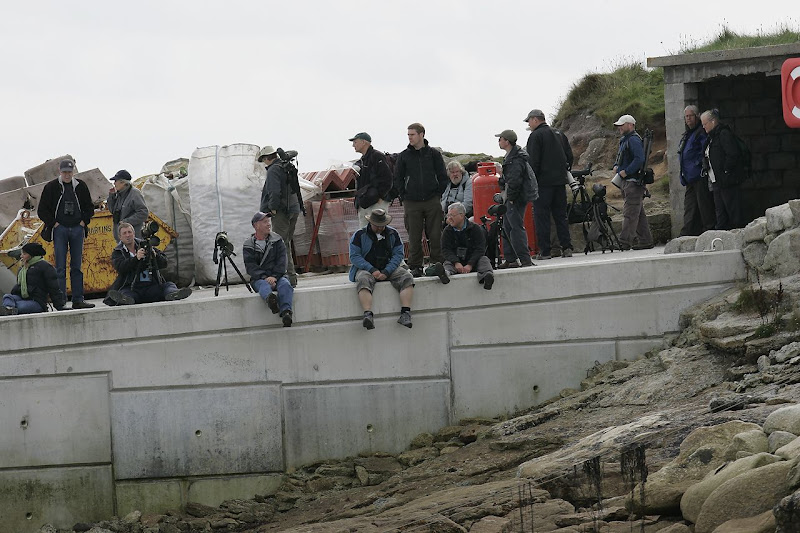 In this photo H is asleep. Again. Sitting to his right is Bradders Snr, I did have a photo after all. To his right, facing left and wearing a cap, is a guy that must be stalking me, as I see him everywhere, and he knows my name, whereas rather insensitively I don't know who he is. Two further to the right, also wearing a cap, is Steve Arlow, carrying the lense I would like. Funnily enough he would like my lense, perhaps I should offer to swap?
Posted by Jonathan Lethbridge at 20:10