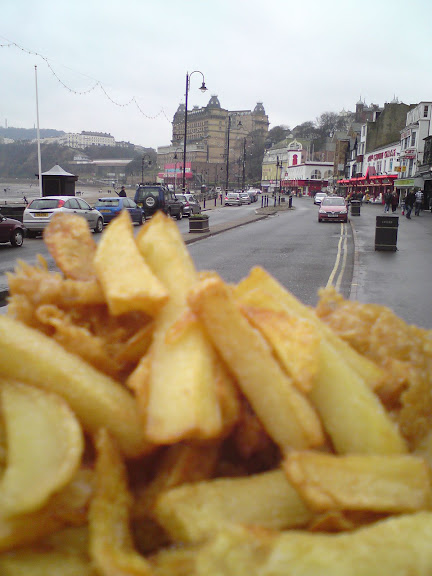 All you need to know about Scarborough

Good sleep last night, really needed it after all those hours awake in the car chatting to the guys. Feeling much better now. So back to the weekend, it was late morning by the time three satisfied thrush customers eventually left the bird and continued on to Scarborough. First order of business was to procure lunch, and a superb fish and chips for a mere £4 reminded me quite how badly we get ripped off down here for something that normally isn't even approaching half as good. We strolled with it down to the harbour front, where we had a Shag whilst polishing it off. An excellent accompaniment to lunch, very satisfying, particularly for Bradders (less so for Shaun), and a year tick for all of us. 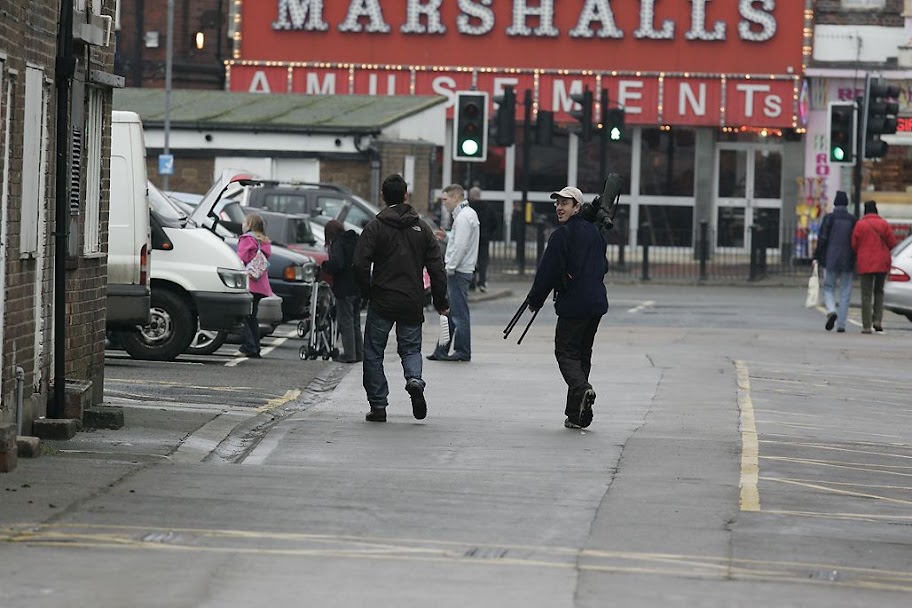 The post-Shag John Wayne walk
Next stop was Filey Brigg, where we had a mini tick-fest of Sea Duck, fly-by Gannet, Guillemot, and some very close waders. I had never been this way of the world before, and it was good to finally see what these places that frequently pop up on the pager were actually like. If I lived locally, I suspect I would be at Filey Brigg a lot - a rocky peninsula sticking out into the bay, an excellent beach, and some dense cover in a valley right next to the point. It lost points for being treacherously slippy almost everywhere, and for not having a "Danger! Do not descend via this path!" sign at the top of the cliff, whereas after our dicey descent we discovered one at the bottom saying "Danger! No safe access to cliff-top carpark!" Thanks a lot, very helpful. We survived it, and spent a happy two hours getting close views of Long-tailed Ducks, various Scoters, Eider, a Red-throated Diver, and some fairly obliging Knot and Purple Sandpiper. 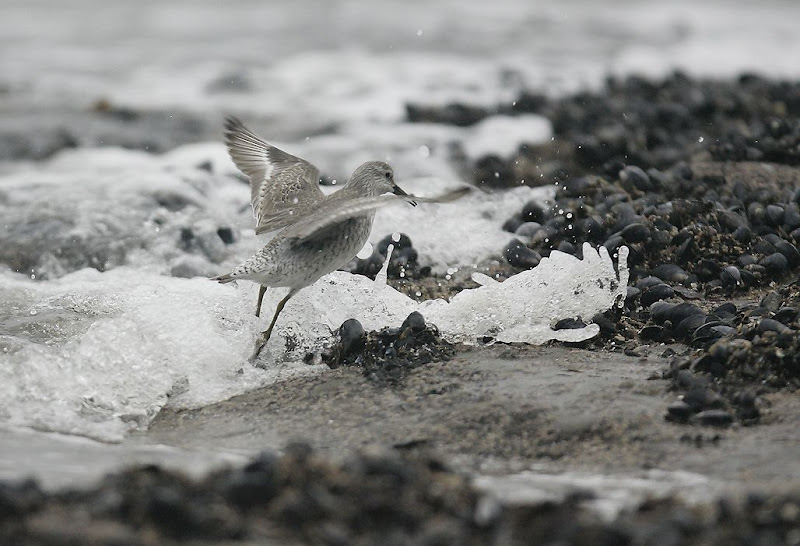 Next stop Flamborough for a flock of 22 Pale-bellied Brents. In Essex these are few and far between, and whilst I thought I had one at Old Hall last year, having seen these ones I am not so sure - they are extremely striking, almost Barnacle-like. Some gen from other Brent twitchers led us to a flock of Greylag in the next field along which contained a Tundra Bean Goose. These soon all got up, and it proved pretty easy to pick it in flight most of the time.

We found what proved to be a stunning B&B in Bridlington, the Burlington Quays Hotel. Friendly owners Nigel and Carol sorted us out some tea and biscuits whilst the rooms were getting made up, and after a quick shower we hit Bridlington on a Saturday night. And in Bridlington, Saturday night is Party Night. Beer is ridiculously pricey in the Harbour Tavern, which encourages responsible drinking. Undeterred by the 6ft sign out the front saying "All Drinks £1.50", we rushed in. It was very unlike Essex, so we attempted to fit in by drinking copious amounts of expensive lager, but were probably seen for the frauds we were. Mere words cannot do justice to the fabulousness of the Harbour Tavern in Bridlington. The evening passed in a blur. 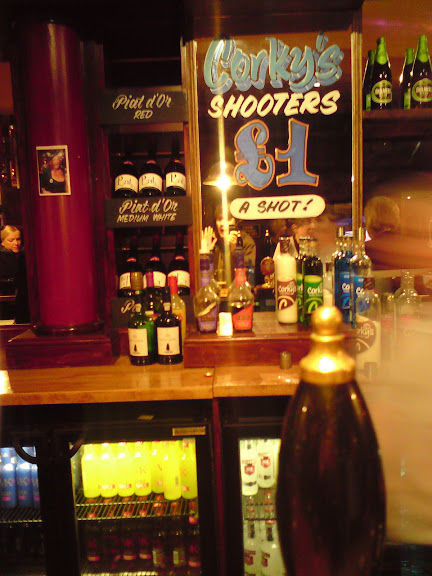 You can take the boy out of Essex, but...

Crashed out back at the B&B, I was surprised at around midnight by my bedside lamp falling on my head. Odd, I thought. As I came to, I became aware of stumbling sounds, flailing hands, and a pathetic whining voice. For a moment I imagined I was back at home and one of the kids needed me. In my role as primary carer, they now bypass Mrs L, and walk around to my side of the bed, so I am constantly getting woken up by their nocturnal trivialities. I had hoped a night away might see me get an uninterrupted sleep, but no....

I leapt into action and led the poor child to the bathroom using my mobile phone screen as emergency lighting.

The next morning I was uncharacteristically tired and grumpy, with a dull head-ache. Presumably this came from being clonked on the head with a lamp, rather than from several litres of beer. Whatever the reason, I didn't talk much for the rest of the day, and may have nodded off in the back of the car on occasion. I think we went birding, but I can't be sure. Somehow my year-list now has Willow Tit, Tree Sparrow, Brambling and Ring-necked Duck on it, so I'm guessing we did. It almost had Little Auk on it as well, but not even I stoop so low. This is only the second I have ever seen, and it had to go and be dead. 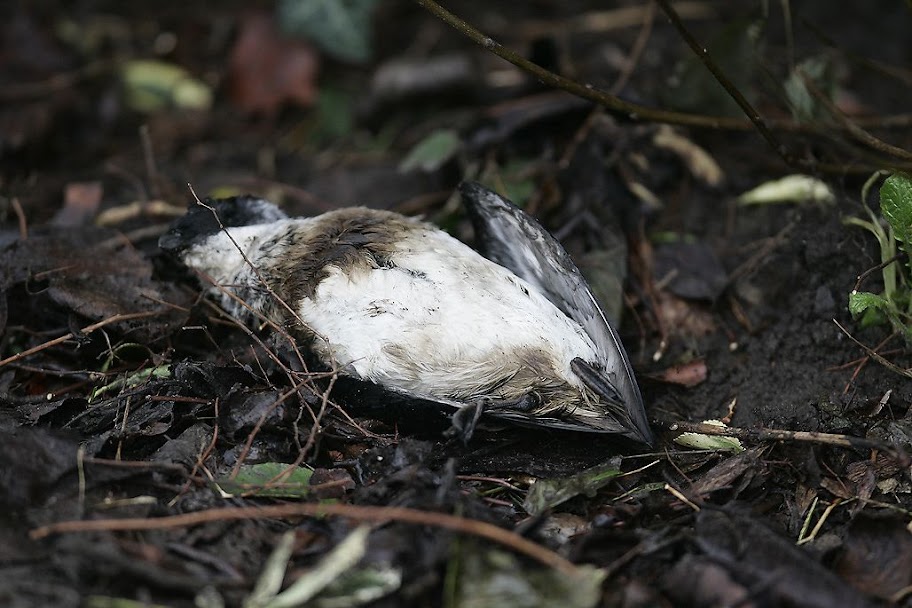 Posted by Jonathan Lethbridge at 19:08