If you go to Northaw Great Wood in Hertfordshire, and you look up at a tree, you will see a Nuthatch. Fact. 100% guaranteed. Today I probably saw about 15 different birds. Alternatively one followed me round the entire wood, hoping for a peanut treat or something. Foolish, I only ever carry Double-deckers.

I had dumped the kids at la Grandmere in Cambridge, and was taking full advantage of the afternoon off to walk around a cold, muddy wood which the girls would not have enjoyed. What I should have been doing was having a haircut - I am beginning to look like James May - but I can do that anytime. That is what have been saying since about October. I almost had one just before Christmas, but went birding instead. At work they had a hairdresser in the building, so every now and then I would pop down and read GQ for half an hour. Fascinating stuff. Do I now have a subscription? Er, no. Now that a haircut is on my own time, as it were, I just can't seem to get there. And it only costs £7, rather than £23. Theoretically I could have four times as many haircuts and look lovely all the time, rather than like a bum.

Anyway, I heard my first Nuthatch as I got out of the car, the second less than a minute later, two more five minutes down the trail, and it continued in this vein. Trying on the other hand to find a Treecreeper was very hard work, and took an hour and a half to find a single bird. But I wasn't there for either of those species, though they were both filthy year ticks, and in London too (113 btw Steve, if you're reading). I was there to plug the biggest gap in my London list, Marsh Tit. To be fair, I have never really looked for them, other than once late last year in Epping Forest, when I failed miserably. This time it was a doddle. I had a silent probable about three minutes in, but it vanished, and I had to wait another fifteen minutes before I located a calling bird that came (and stayed) within range. Miserable weather and a bird that refused to come down from the top branches resulted in record shots, ahem. In fact these are a step below record shots, and how several thousand pounds of camera gear managed to produce something quite so pathetic is hard to fathom. So bad I couldn't bear to post them up here, which is saying something. Instead I have mucked about with them and produced an artists impression. You get what you pay for on this blog. Exactly. 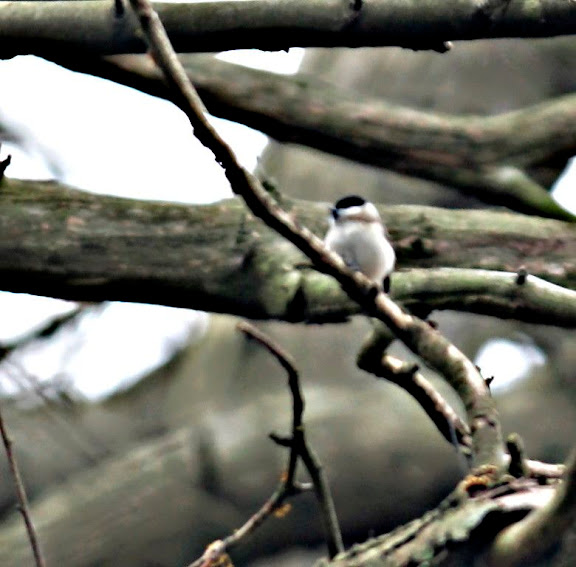 I eventually located four birds, so clearly they're surviving pretty well in there. Just better hope that the Nuthatches don't become predatory.

Time running out due to the Treecreeper hunt, I hurried the few miles to the Lea Valley, looking for Ashley Pit as I had heard it was good for Goosander. I never found it, turns out I was too far south, but the Birding Gods smiled on me with a pair on the North Met Pit, which I was walking past on my way up there (or so I thought at the time). I do have a photo, but it makes the Marsh Tit above look like a masterpiece.

So a rather good day, and RLP ticked from the A505 as well. New total 129, of which 123 are in Essex, and 113 in London. Though I am going to spoil these frankly excellent statistics by twitching the Black-throated Thush in North Yorkshire at the weekend.

PS I'm not really going for the London Big Year all time record, far too stressful. And anyway, I've not even been to Norfolk yet.

Posted by Jonathan Lethbridge at 22:26