Upon the Sacrificial Altar of Gull

First decent mis-ID of 2010, and nicely public as well. Gulls are bad news, and of all the bird groups I find them the most difficult. Never one to shy away from something difficult and boring (viz, dusting), I am actively seeking out large groups of loafing gulls and painstakingly picking through them in the hope of learning something. Fat chance.

Yesterday I was scanning the Target Pools at Rainham, filled with self-loathing of course, and I picked out a juvenile gull I thought was interesting. This is where it gets dangerous. It wasn't a Herring, and it wasn't a GBB, so what was it? Naturally I settled on the least likely species, Caspian, and started talking myself into it. Look at those long legs! And the eye is dark too. Oooh, and look, the head is nice and white and there is a lot of streaking on the neck. The bill seems slender as well. Could it be? I wasn't sure. And I think that is the key with these things, it should just jump out at you as being "right", rather than needing to be talked-up a lot. You will have guessed by now it wasn't a Caspian, and in fact I didn't even get the age right, but the real one I found last year, on reflection, had me much more excited and I knew it was right. But I'm not showing the photos to anyone!

Yep, I took a few phone-scoped shots of immense quality, and because I wasn't sure, mailed them to a few people to ask for thoughts. Then a few more people got interested and so I thought, what the hell, post them up on the London site, who cares. And so there I was, late yesterday evening, pegged out upon the Sacrificial Altar of Gull. At least I never claimed it definitely was a Caspian I suppose, but I should imagine quite a few people are sniggering simply because I thought it might be.... 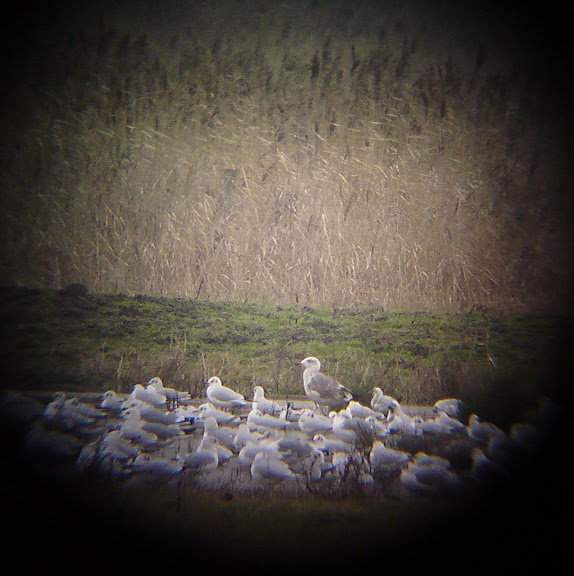 People were quite nice about it on the web (and you had better be in the comments box, too!) Opinion is actually divided as to whether it is a Yellow-legged Gull or, worse still for my reputation, a Lesser Black-backed Gull, but whichever it was, Caspian it wasn't. Of course the photos don't do it justice, it was much more Caspian-like in the field, blah blah blah. Who am I kidding? I don't actually know whether to score this one up as negative "cock-up" points for my goal of "become a better birder", or to call it a result. After all, becoming a better birder isn't necessarily about getting IDs right, it can also be about looking at birds more carefully, asking the right questions, recognising your limitations and seeking second opinions. And fifty other opinions. Mrs L helpfully commented that I got the ID half-right. The "Gull" bit..... Oh well, it has at least provided something to write about, as I struggle sometimes....

I studiously avoided all the gulls on Wanstead Flats this morning. But I will go back to them, and soon. There is a perverse pleasure to be had in standing around getting cold, the smell of an active rubbish tip wafting up your nostrils, and looking through vast numbers of very very similar birds that you can't ID properly.

Instead I picked up a year-tick in Chiffchaff on the island on Alexandra Lake, presumably the same one I saw before Christmas and had been hoping was still there. Don't worry, I will be trying to turn it into a Siberian one. Then in Wanstead Park I got the Coal Tit and male Firecrest in Reservoir Wood, which take me up to 60 for the year, which I believe is a goal met.

Posted by Jonathan Lethbridge at 13:37