Hard work today with the continued freeze - waterfowl limited to two Mute Swans and a fly-over Mallard. I'm not counting the Canada Geese - they occupy the ecological niche where sheep would otherwise be. I only really ever see them on the grass, grazing away. Bleating. They fly about more than sheep do of course, but otherwise I struggle to see any significant difference. No, I had to be content with a single Mallard, and my pitiful patchlist is still lacking even a Tufted Duck and Shoveler. Dave Mo has them all at Barking Outfall, and is gleefully experiencing record counts of just about everything at the moment.

I was out by about 7:30am, just as it was getting light, and the ground was frozen solid. I was hoping for a Snipe in the long grass, or Lapwings on the playing field, but the whole place was largely deserted. I encountered the usual group of Skylarks feeding on Fairground Flats, and on the way added Dunnock and Reed Bunting, but none of the usual Sparrows were about, and the early morning Kestrel I usually see wasn't there either.

Things picked up a bit as I crossed over Centre Road, with three or four more Reed Buntings, and about half a dozen Meadow Pipits. A Jay skrawked from west of Long Wood, four Goldfinches flew over, and a Cormorant cut north-west across the morning sky. And all the while a constant stream of gulls came the other way, heading for the river.

And what a sky! Only had my phone with me, but I don't think any camera would have done it justice really - you just had to be there. I watched it develop for a good fifteen minutes, the warmth in my feet gradually retreating. Then it was time to go - an hour had passed in an instant, and I had to hurry back for the school run. 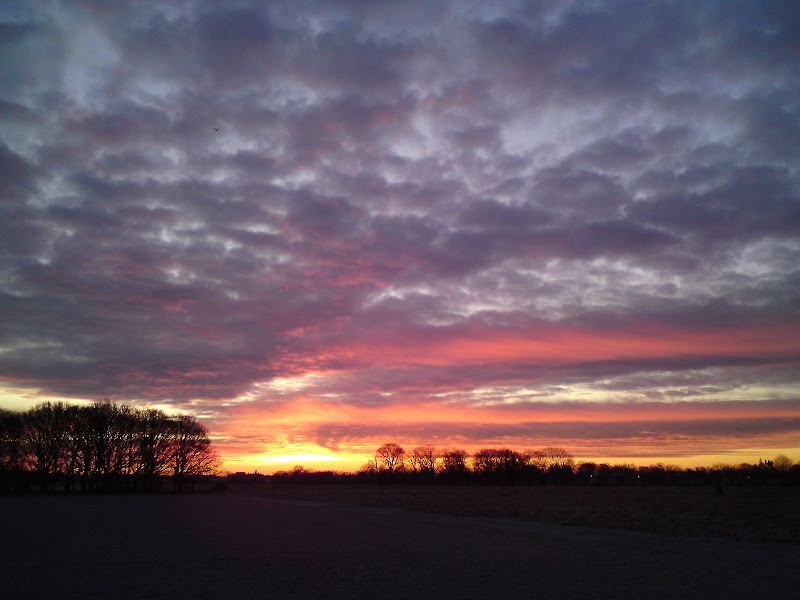 I wasn't able to get back to the Flats, it was too cold really to venture out with whiny kids. I had a quick look at the Basin - still frozen, nothing on it - and popped into Reservoir Wood to see if I could jam the Firecrests. I couldn't, but added Long-tailed Tit, Great Spot, and Song Thrush.

The year-list I'm not doing continues to go badly, with another five species added since the Essex trip. Most notable was only my fourth Glaucous Gull, which happily turned up at Rainham for a morning. I only just got there, having left my phone at home, thus missing all Howard's phone calls, and of course I had yet again not looked at my pager. I dashed over there with all three kids and got it from the ramp just before it flew off. Perhaps a rocking-horse had been taken for a walk at Southend?

Posted by Jonathan Lethbridge at 20:05