The Salton Sea. I had questioned whether I had enough time to get here, and if instead I should have stayed near the coast birding sites more thoroughly in the limited time I had. One look at the sheer numbers and I could not stay away. I started at first light at the very southern end of the lake, called “Unit 1” of the Sonny Bono Salton Sea NWR, arriving just after a guided tour group. The fields at the end of the track held thousands of Geese – mainly Snow Geese but also good numbers of the more diminutive Ross’s Geese. An incredible sight and sound, with constant new arrivals and departures, all honking away. You could happily get out and take photos, but interestingly birds close to the road were flushed by moving cars. Some shallow pools further towards the observation decks held hundreds of Shoveler, Black-necked Stilt and other waders. A small group of Sandhill Crane were also feeding near here. At the end of the track I left the car and viewed some of the pools from a slightly higher elevation. To the north a distant large bund was covered in hirundines – mostly Tree Swallow but with some Barn Swallow as well. A Peregrine perched on a pylon, and there were at least four Northern Harriers hunting. In the shallows many waders fed, and if I had thought that one of the earlier pools had had a lot of Shoveler, that had been a fraction of the numbers I could now see, along with thousands of Green-winged Teal. The bird of the morning however went to an American Bittern in plain sight on one of the levees, which a short while later treated me to a flyby. I could not believe I had nearly omitted this area from my itinerary!

I made a brief stop at a Ramer Lake, just north of Rockwood. This was slightly out of my way, but not hugely so and it was one of the only places I could expect to get Clark’s Grebe. I found a view point on the eastern side and scoped from a small pontoon. Seven Clark’s Grebe were seen, along with a Black-necked Grebe, two Pied-billed Grebe, and several Ruddy Duck. The most numerous birds were Ring-billed Gulls, Double-crested Cormorants and White Pelicans. Just to the north of this site along Kershaw Road was a large cattle lot and this held many hundreds of Brewer’s Blackbirds and Grackles.

I then drove along Highway 111 to the Union Tract Visitor Centre. There were more Snow Geese here, although it is a bit of a walk out to the lake shore. I was already behind schedule so I birded around the visitor centre. Highlights here were two nesting Burrowing Owls in pipes by the entrance gate, a Greater Roadrunner, and around the feeder scrub Abert’s Towhee, Common Ground Dove, and both Blue-grey and Black-tailed Gnatcatchers. In the fields alongside the road were several hundred Cattle Egret, and a flock of Western Meadowlark.

By now it was mid-morning and being me, I was already slightly nervous about my flight out of LAX which left in ten hours time! I needed to make tracks, and carrying on north drove up to the Salton Sea SRA HQ. This is also on the east side of the lake but almost near the very top. The main birding area here is the small harbour and the surrounding bushes. In the harbour itself were several hundred Blue-winged Teal, a Spotted Sandpiper on the margins, and the vagrant female Garganey was easily found near the old pier. I had known about this bird for some time, and as I always like to pick up a few ABA code 4 birds on any trip I go on it was another tick in the box for including the Salton Sea after all. I walked out to the edge of the lake to see a vast number of Bonaparte’s Gull. Thousands, uncountable numbers. The flock stretched hundreds of metres north and south, and somewhere within it were a few Black-headed Gulls. I gave it about half an hour before I lost the will to live and went back to proper birding. Also out on the water were several Surf Scoter, Goldeneye, Ruddy Duck, American Wigeon and Pintail, along with hundreds of Redhead and Shoveler.

There were lots and lots of waders on the shoreline - Dunlin, Grey Plover, American Avocet, Black-necked Stilt, Killdeer, Semipalmated Plover, Western Sandpiper and Willet. In the bushes south of the harbour I tracked down Phainopepla, Northern Mockingbird, Verdin, Black Phoebe and Black-tailed Gnatcatcher along a small path away from the campground.

My trip was nearly over and I was still missing a southern California speciality - Costa’s Hummingbird. I had read about a zoo near Palm Springs that had lovely gardens, the Living Desert Zoo and Gardens, and as this was more or less directly on my route to the airport I stopped in. The car park was heaving at 1pm, and seeing the throngs of people convinced me I did not want to be here. Luckily there were quite a few Costa’s Hummingbirds in the landscaped bits around the car park, so my advice to birders is either go early or just stick to the outside. I walked a circuit to see what else I could find and picked up Phainopepla, Verdin, Ladder-backed Woodpecker, Greater Roadrunner and Say’s Phoebe. Some small trees between parking bays held many Yellow-rumped Warbler and House Finch. I had one final stop in mind which I felt I had time for even with the legendary Los Angeles evening traffic. This was the San Jactino Wildlife Area centred around Mystic Lake. This turned out to be superb area and I spent close to two hours here driving around the mostly empty tracks. Lots of waders and wildfowl on pools very close to the road, and also many raptors including Bald Eagle and Northern Harrier. I saw over 50 species and the full eBird checklist is here.


At 4pm I called time and headed for Los Angeles which I made with plenty of time to spare. It had a been a frenetic trip with just over 150 species seen in two and a half days, including a small number of new ABA species and indeed world lifers. Had I had an extra day I would likely have spent it on the coast between Los Angeles and San Diego, and there were a number of sites in San Diego itself which I never got to. Can’t wait for the next one! 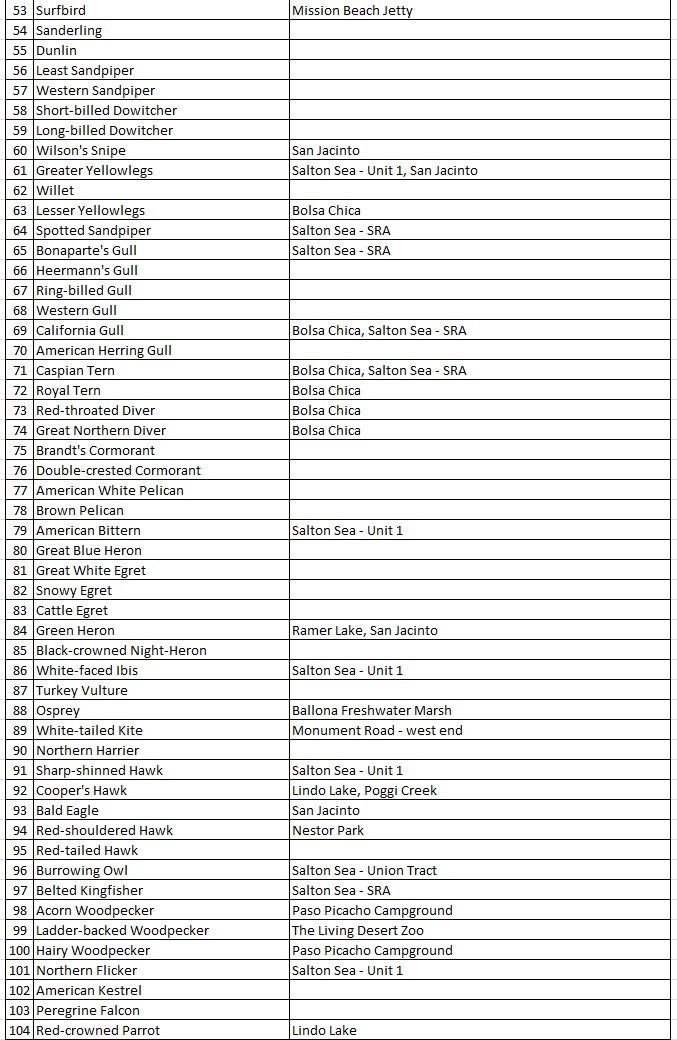 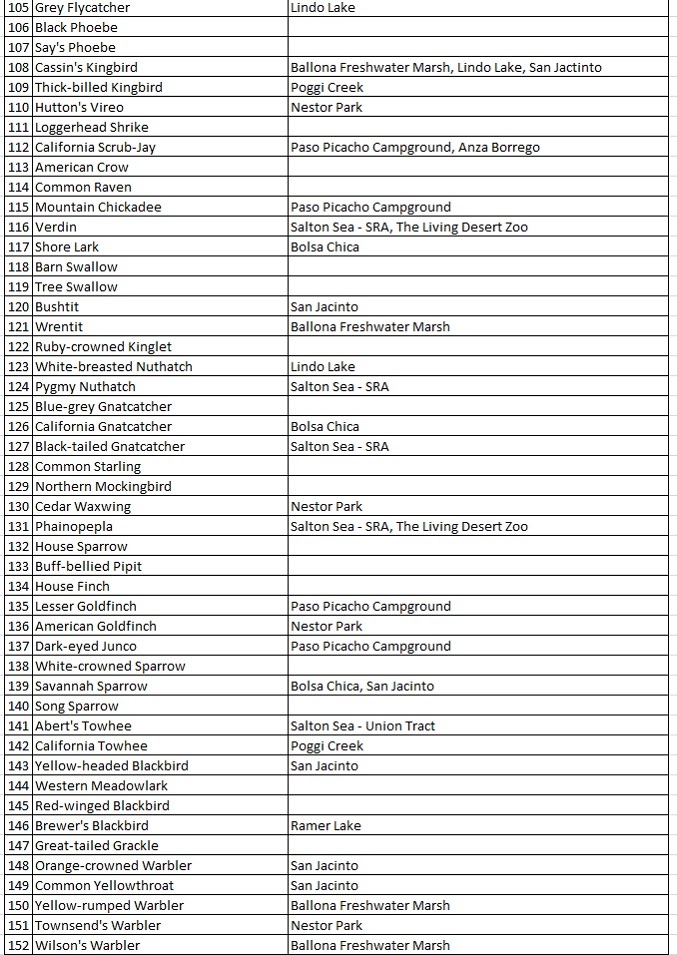 Posted by Jonathan Lethbridge at 17:11