Wanstead Waterfowl and another Garden Tick

The weather here, in common with most of the country, has been foul. If I lived on the coast I'd be sea-watching on an almost permenant basis (wouldn't want to miss anything!), but I don't so I have been drinking tea and looking out of the window, puffing. This did get me a garden tick though, but telling you what it was requires some preamble....

So....in another example of my extreme bone-idleness, I have taken about six months to fix a broken pane in my greenhouse. It is a very tricky triangular pane, and lazy arse that I am, back in May or whenever it mysteriously exploded into about four trillion very small pieces, I cut a piece of bubble wrap to size and gaffer-taped it on. Neat, I thought. A couple of days later the replacement pane arrived, and throughout the long, warm and rain-free summer and autumn I have been carefully storing it behind a bench. On Monday morning, as it was gaily tipping it down yet again, I noticed during one of my looking-out-the-window-and-puffing-and-feeling-miserable sessions that the bubble-wrap had disappeared, and that nasty cold rain was entering the greenhouse and soaking tropical plants that were unlikely to appreciate it very much. In the downpour I located the bubble-wrap in a flower-bed, got up on a ladder and used bulldog clips to secure it in place again, and got soaked - which is becoming a habit of late. Gosh, this is long-winded isn't it? Anyway, on Tuesday it was quite a nice day, I discovered some long-lost resolve, found the pane, unscrewed various bars and fixed it properly. In the middle of this a Grey Wagtail flew over the house calling and showing a lovely long tail. Nice, and #57 for the garden. See, got there in the end. I really do admire people who can write succinctly and do short blog posts. Good job I finally did fix it, as it has been raining more or less constantly since then and one of my hurridly-placed clips had already fallen off. I had lost the "to-do" list that this job was on months ago, so I wrote it on the current one and then immediately crossed it out again. Very satisfying.

There has been one clear morning, yesterday. Rather than attempt to get Goosander on my London list for about the fourth time, I stayed local and had a wander around the Perch and Heronry Ponds. This was mainly in the vain hope of a rare duck to grace my 2009 patch list, but also I hadn't used the camera in anger for a long time and I was in the mood. Somehow managed to reel off about 700 photos in the space of three hours, mainly of Coot and Mallard, as opposed to the Smew and Wigeon I was hoping for, nevermind. Editing them down took most of yesterday evening, and my delete button is worn to a nubbin, but I thought I'd share a few that made it through the cull. 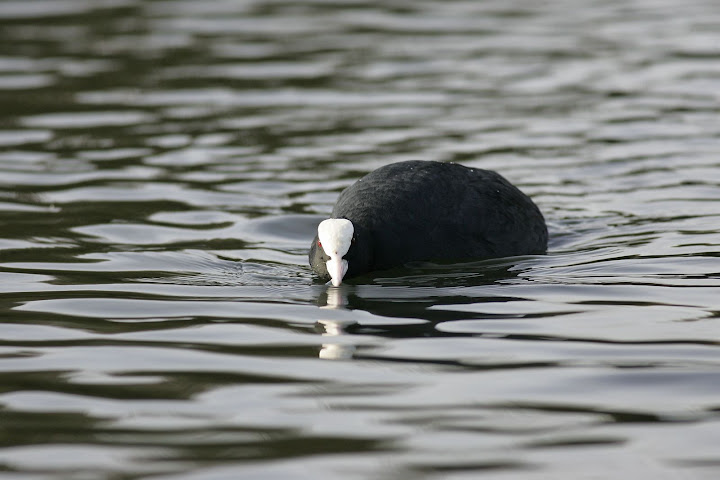 If you look at Coots for long enough, they start to become vaguely interesting. This one was very determinedly chasing one specific other Coot. None of the other 3,000 Coots present came to grief, only this one bird. I wonder what it had done? 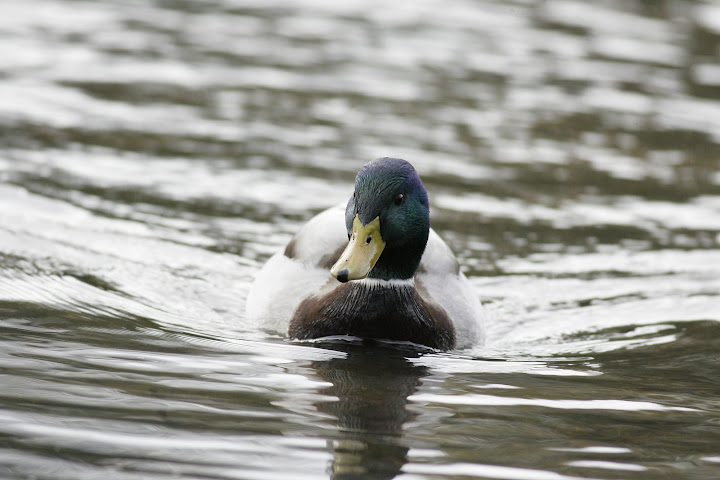 I took about 150 shots of this drake bathing, on high-speed mode, depressing the shutter every time he started. A lot of the shots came out ok, with suitable water droplets everywhere, and this one was my favourite. I came within about 10 centimetres of taking one I would have been really pleased with, but was a millisecond too late panning!

Posted by Jonathan Lethbridge at 10:42