Achievements in the Covid Era

When people say that during the pandemic they learned a new language, took up Tai Chi, renovated a small house in the country and so on I tend to be quite skeptical. Did anyone really do that kind of thing? Not in this house, I could barely pick up a book. But not being able to go anywhere did cause many people to reevaluate life a bit, and the narrowing of horizons has in some respects caused a widening of perspective and a newfound appreciation for the basics.

If we were not travelling, not going anywhere, not having our senses piqued by external forces then we were damned sure we were going to raise the enjoyment bar at home. In Chateau L we started with our stomachs. The quality of food round here has gone up significantly, and along with it, wine. The cellar has taken a real beating but so far has sustained us admirably. There is definitely element of "screw it, why the hell not", and then a lovely cork is pulled. Yesterday over dinner - Salmon and leek gratin, with Meursault - we went through all the new veggie recipes we had tried over the last few years and pulled out four of the best ones for this coming week, we're having duck for the fifth night as we're not wholly vegetarian and eat meat or fish once or twice a week still. We score all vegetarian dishes out of five, each diner having a vote, and then round to the nearest integer. There have been some unanimous fives, like cherry tomato and four-cheese tart, or mange tout and pistachio trofie. However as well as reminiscing about the glorious successes we were also reminded of the absolute stinkers. The children tend to pull no punches, zero is far from unknown from these judges, and although the lentil ragu was about nine months ago they apparently still carry the scars. I thought it was quite nice actually, perhaps not one I'd like to have too frequently, but the children have made it very clear that it is not to be cooked again until they have all left home. Obviously it didn't make the cut for next week, but no matter. I am very much looking forward to what did.

Is comfort eating an achievement? Maybe not. I actually think that just getting through this shit show with your sanity vaguely intact is a pretty monumental achievement in itself, but we have really raised the bar when it comes to baking bread (see what I did there?). We have a bread maker still, but it sits idle and unloved on the counter. Now we bake sourdough with a passion, a middle-class pastime if ever there was one, perfect for Wanstead. We have settled into a routine, and without wishing to brag Team L is getting better and better at it. We started tentatively in November, and the results whilst good were not wholly consistent. But now, behold! 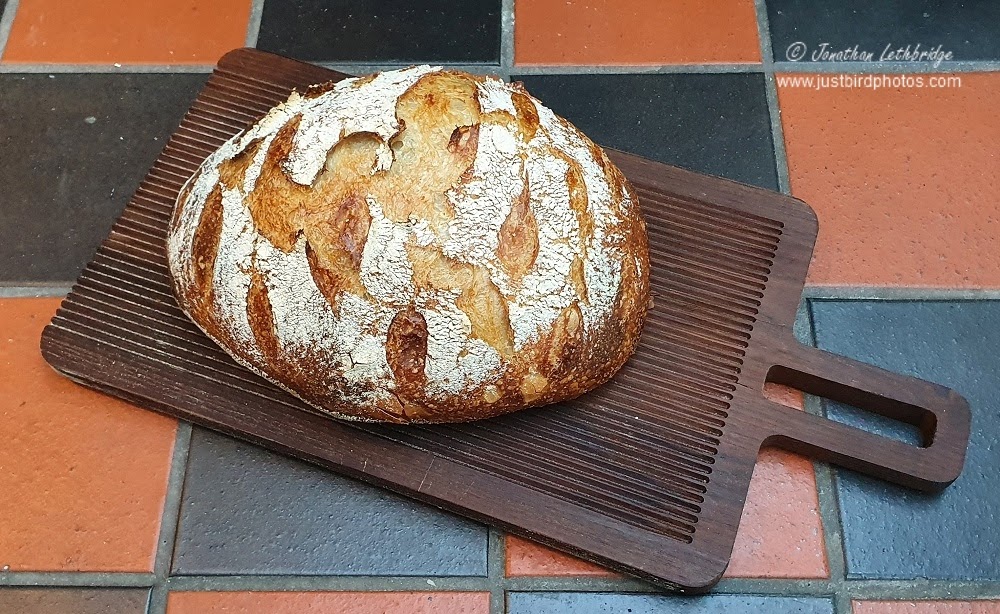 Mrs L starts the process off in the morning before she goes to work - mixing flour and water, and preparing the starter. At around lunchtime I come downstairs and engage in some heavy duty mixing, especially when me make a double recipe for the weekend. Throughout the afternoon if I can engineer a break between hour-long conference calls I nip downstairs and knead the mixture for a few minutes. The first couple of times it is very wet and sticky, but by about the third go it is far more like dough. Mrs L does the final stretch when she gets home, and then the now dough is set aside for the following morning. Mrs L rises earlier than the rest of us and her first daily task is to bake the loaf. It takes an hour, by which time the rest of us are stirring, egged on by the smell of fresh bread. Boy oh boy. I cannot begin to tell you what a start to the morning this is. It provides breakfast, sandwiches for lunch, and will generally last to the next morning so we don't need to do it every day. Our lives are transformed I tell you, transformed. You just want to get up in the morning and eat bread and drink coffee. With an espresso at my side and a slice in hand, slathered in butter and apricot jam, I look outside at the gathering light and realise despite all the angst that life is a joy, and that we can get through this. All you need is bread. 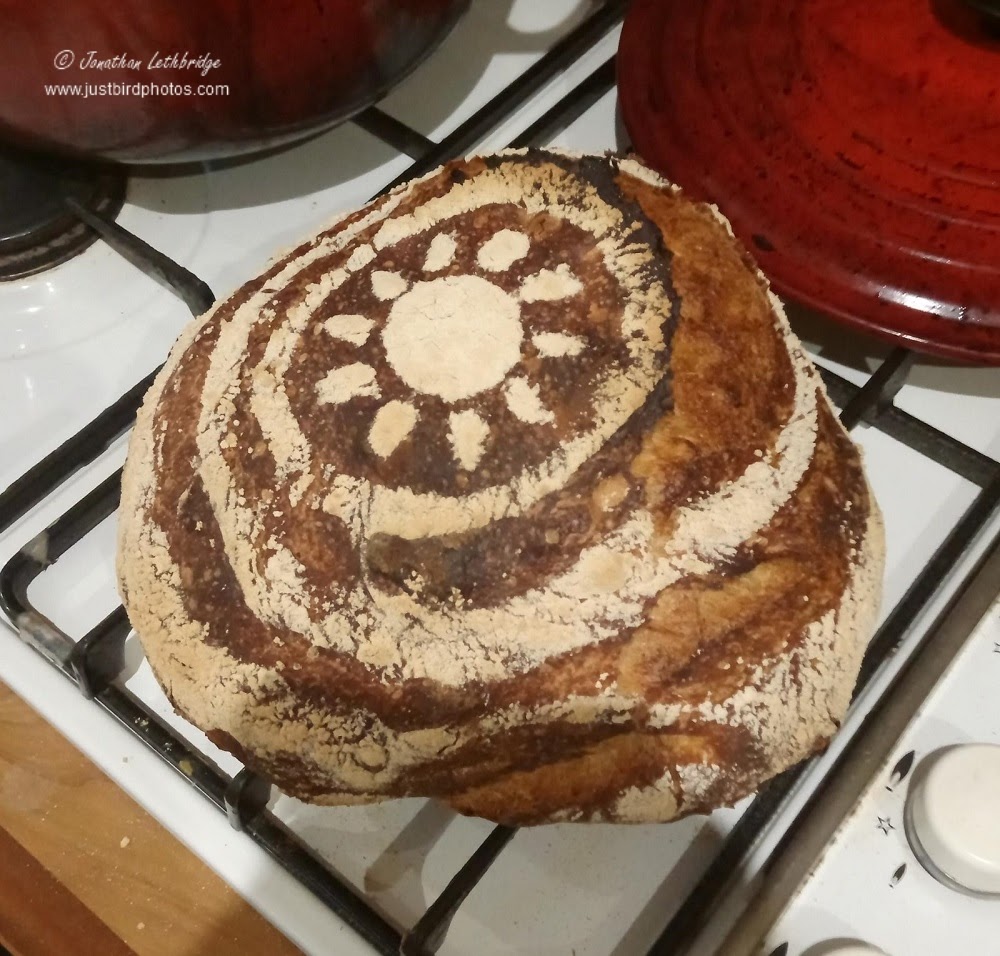 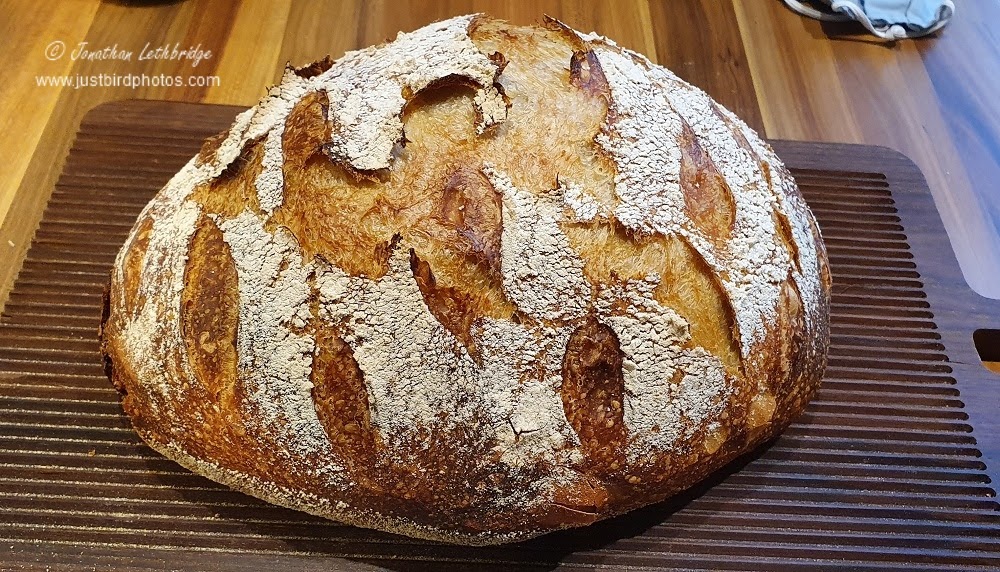 Posted by Jonathan Lethbridge at 14:11