In which we become bakers

Just before COVID struck we went to visit some friends in Reading. We got stuck in traffic, and in one of these jams my youngest complained of feeling unwell. No doubt it was this time in a confined space that did for me. We did eventually arrive, and thankfully (as we now can be sure) we did not pass on the virus to our friends, probably as most of our visit was taken up by a long walk along the river. When we got back from the walk, we were treated to some wonderful home made soup and a fresh loaf of sourdough bread.

Now many readers may think that sourdough bread is just the latest in a long line of middle class fads, with artisanal bakeries springing up all over the place in order to flog £4 loaves of bread to well-heeled locals who know no better. Alongside these appear eateries that add crushed avocado for a nice round tenner. I'll admit there is more than a whiff of that, but oh my goodness sourdough bread is wonderful.

Disenchanted with supermarket offerings and loathe to pay the £4 for Gail's or similar, we've been baking our own bread for a while with the aid of a Panasonic bread machine - I wrote about it here. It's pretty clever but it can't make sourdough. Nonetheless, you just pour in all the ingredients before you go to bed and when you wake up there is a loaf of warm fresh bread waiting for you. You can tinker with the type of flour, add seeds etc which get tipped in at an opportune moment, but fundamentally you get a rectangular loaf bread each time and amazing though this is it is very hard to get a satisfyingly crunchy crust. And its not sourdough. Despite this it has been a brilliant investment, especially post-Brexit and during the pandemic when food, including bread, has become noticeably less fresh. Vegetables have been the worst affected, tired limp rubbish turns up with increasing frequency, and what little meat we eat sometimes arrives on the turn, including our Christmas duck last year which was a real blow. Likewise the few loaves of bread we have ordered have been more or less dead on arrival, so the bread machine has turned out to have been an inspired purchase. We started buying really nice flour in 16kg sacks direct from a mill when supermarket flour shortages briefly became a thing, and have not looked back.

But it cannot make sourdough, and so this fresh and beautiful loaf that arrived on our friends' dining table was greeted with awe. It was spectacular! We had always thought sourdough was simply impossible to make at home, hence why if you wanted some you had to pay through the nose for it. Not so. Well.... it's clearly not as easy as dumping some ingredients in a tin and pressing start, but neither is it completely impossible. Somewhat of a faff perhaps, but versus what you get at the end, faff we now find ourselves happy to undertake - our friends wrote out two pages of instructions and timings, and pressed into our hands a small dollop of their sourdough starter in a jar. We were on our way.

Once back home we began to care for our new starter - you have to feed it regularly. The kids have always wanted a pet, and now they have a living breathing creature to nurture. Making a loaf is a 24-36 hour process which sounds off-putting but isn't actually that bad. On the first morning you have to take a small amount of your starter and add a similar amount of flour and water to it, a ratio of 1:1:1, and then leave it somewhere warm for four hours in an enclosed container. This is also how you feed it and keep it alive, but if you are not making bread with it it stays in the fridge. From these small beginnings you gradually end up with a jar of thick white liquid that is alive in some way, I don't confess to understand it. You then add this to a much larger bowl of flour and water that you have previously mixed up and also left for four hours. Make sure to stir it in really well. This is by far the hardest part, the stuff is a hugely dense and unrelenting sticky morass that requires genuine elbow grease to mix in properly -  I've now done this step once and can testify to how tiring it is. For the next four hours, each hour on the hour you stretch out the dough and refold it back onto itself a few times. This too is reasonably physically challenging, especially in my feeble state. After the final stretch cover it and put it in the fridge overnight. Go to sleep dreaming of bread. The next morning or afternoon, or in any event at some point between 12 and 24 hours later, take the bowl of dough out of the fridge and leave it to warm to room temperature. Meanwhile heat the oven to 270 degrees, hotter if not a fan oven. Form the dough into a round ball, and place this into a large iron oven dish with a lid, first sprinkling semolina on the base so that it does not stick. Those big Le Creuset things would seem to be ideal and luckily we already had one. Just before you put it in the oven, score the skin of the dough lightly with a razor to make some kind of pattern, a simple cross will do or you can really go to town with something far more complex. This scoring is critical as without it the loaf might explode. Sprinkle some white flour all over the top and bake it for 40 minutes with the lid on followed by ten minutes with the lid off. 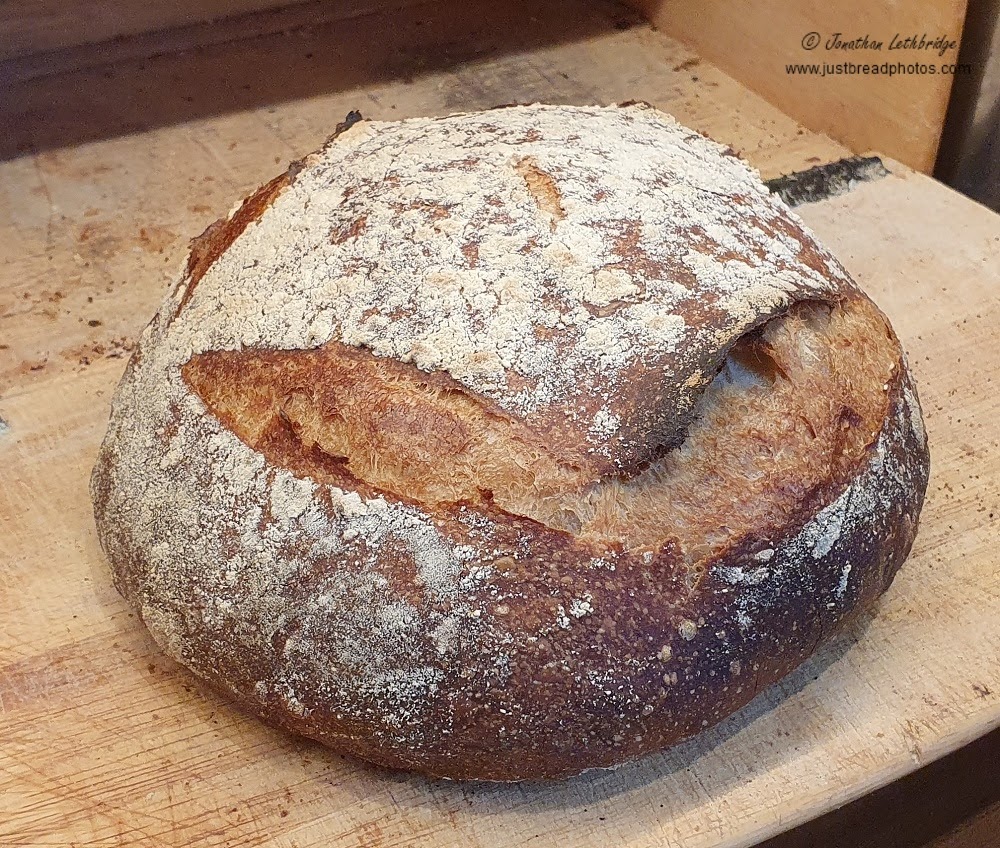 My God it is delicious, and the crust is to die for. Depending on what kind of flour you use and what temperature the various bits of it were left at seems to influence how fluffy or dense the resulting bread is. Our lightest one so far was with plain flour, and was left for the longest amount of time once coming out of the fridge, but I have no idea how much this really influences what you get. Maybe super stretching also plays a part? 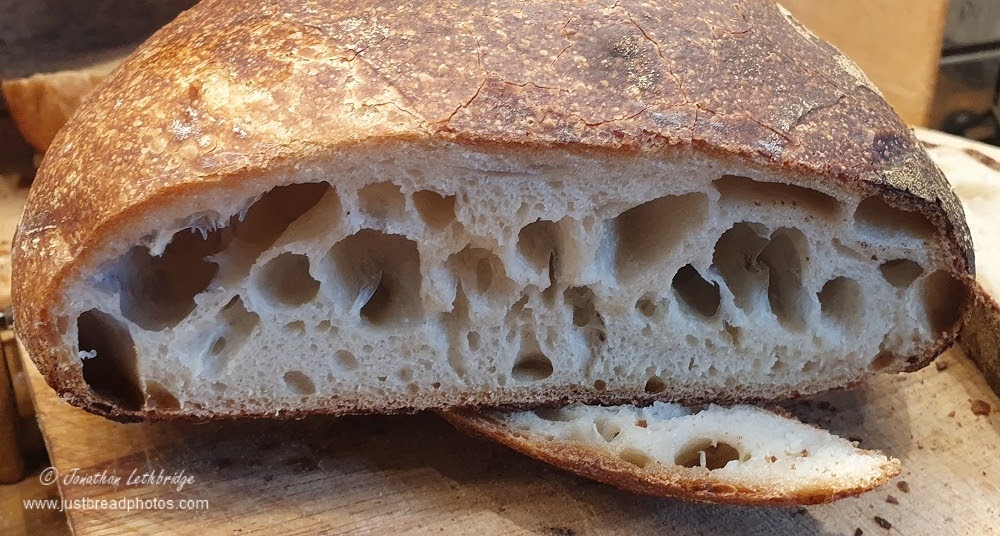 The cost of a loaf is about 65p for the flour, and about 15p to fire up the oven (though by the end of this year this is likely to be 30p....). What a bargain, literally a fifth the cost of the high street. And it lasts for ages as well, the best part of a week if you can resist it. Given the effort we have already started making a double recipe and cooking the loaves one after the other. We then eat one and freeze the second. Life will never be the same again.