One of the joys of eBird is that it tots up how many birds you have seen in any given month, in any given single patch or geographical area. This could all get a bit silly of course, but its useful to track how many birds have been seen on the patch, and it can also tell me what my UK month list is. I've been quite captivated by this particular stat this year, as let's face it there isn't that much else going on in my life is there?

I spent a bit of time looking back through all my historical data to see how many times I had seen over 100 species in a month in the UK. A lot is the answer, my inputted records go back to about 2007, and in over a third of the months since then I've reached this milestone, which probably means it isn't a milestone at all. Upping the bar a bit, what about 125? About 18% of the time. Right, what about 150 - surely that is a lot harder to do? It is, much harder. In fact in only 11 of the 180 or so months for which I have data have I reached 150. 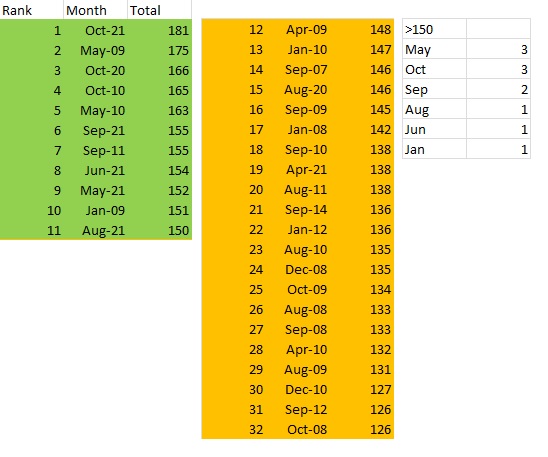 My record until recently was 175, set in May 2009. I think I was year-listing at the time, or perhaps quite into twitching, and thus went to quite a lot of places, different habitats and so on. I had a few solid months in 2010, but after that I never really came close again, and in fact from 2015 to 2019 I broke the 100 mark just twice as I did a lot more birding abroad instead. And then along came the global pandemic and UK birding suddenly snapped back into focus. The spring and autumn months in 2020 and this year were pretty good, but I never quite got near that 175 high water mark until this October just passed.

I smashed it. I had a morning in Fife and an afternoon in Aberdeenshire on the 1st October, so even before getting on the ferry to Shetland the list was on 83. The week on Shetland was of course monumental, as recounted in recent blog posts, and took me to 147, and of course up there they don't have a pile of common stuff like Canada Goose, Little Grebe or Kingfisher so the quick stop in at Swillington Ings on the way back added another 11 for 158. The next day I was out on my local patch seeing Parakeets, Green Woodpecker and the like for 167, and Rainham the following weekend added Avocets and so on for 175. I broke my record on the 18th October, fittingly with a Coal Tit in my own garden. And then came COVID!

My isolation period took me to very nearly the end of the month, ten days of prime birding cruelly ripped from under my feet. I saw a Peregrine from my bed thanks to great directions from some of the guys on the patch the first weekend, but it was not until this weekend just gone that I could get out birding again properly. After a damp morning visit to Wanstead Flats (Jack Snipe, #129 for the year!) I went to Rainham again on Saturday afternoon, as this promised a number of things I needed. It took three hours, but I got them all! Dartford Warbler and Ring Ouzel on the sea wall and Bearded Tit and Water Pipit on the reserve took me to 181. Yesterday, the 31st, I could have taken a walk locally to try and add Treecreeper, Nuthatch and Fieldfare, but after walking six miles around the patch and Rainham I felt a bit drained and could not summon the energy - I might be over COVID but it may take a while to get back to 100%. If I had, and then toddled up to Epping Forest for Mandarin Duck, so often the emergency tick, I could have managed 185! As it is I think 181 is a fine effort and one I am really pleased with.

I expect November and December to be a lot more pedestrian. It is a busy period at work and reduced daylight hours make it a lot harder to get out in the morning for any meaningful length of time. Plus I am trying to get to America at some point as my trip got cancelled due to catching the virus - I still have nearly a month of holiday to use this year and we are in a "use it or lose it" situation now. And also having got over the line and crushed my record the excitement just isn't there any more, which in all honesty is probably a good thing!

Posted by Jonathan Lethbridge at 17:20