The earliest Rainham Marshes list that I can find is from January 13th 2007. From then until the end of 2010 it was where I most often went birding if I wasn't in Wanstead. 2009 and 2010 were the peak years - the financial crisis saw me get laid off and I had a thoroughly wonderful time away from the world of work looking after my kids and birding here there and everywhere - this period is chronicled on this very blog. By the end of 2010 I'd racked up 183 species on the reserve. In 2011 I went back to work and my visits to Rainham declined hugely - if I had time I was either on my home patch or off elsewhere. The list stalled. In 2011 I added just one, the well-twitched Slaty-backed Gull. If I could manage it I visited for rarities, and by the end of 2019 I'd painstakingly crept up to 197 with the addition of Firecrest, a bird that had somehow eluded me over all those years. For those of you who don't know Rainham, although it is a large site only a tiny proportion of it is woodland, so some birds are incredibly scarce - I've only ever seen a handful of Garden Warbler and Spotted Flycatchers there for example, and I'm still missing Bullfinch.

As you know, when I get to a number on a list that is close to a round number I start to get a bit excitable. A bit stupid.197 is quite close to a round number.... Earlier this year I took stock of the possible remaining targets. Siskin and Tree Pipit were two easy ones that had somehow gone unrecorded in over a decade of visits. The trouble is that when the Tree Pipits come over I am far more interested in seeing them here in Wanstead, and it is also a time of year when the patch is at its best so I tend not to go anywhere else for fear of missing out. This is the price of keeping lists. Not so with Siskin however, and so when I had finally got this on my lockdown list I made sure to be at Rainham early one weekend morning to get them there too. This was in mid-September when there were Siskin all over the place and I had probably been on the river wall for only about fifteen minutes before the first birds made themselves known as they migrated over. 198.

199 came this morning. Raven. Raven is a good London bird at any site, and a few years ago a pair that bred in the vicinity were regularly seen on the reserve but my visits regularly failed to coincide with theirs! Sightings have declined since then but I noted at the start of December that the birds were being seen again on Wennington Marsh from time to time. Today I thought I would give it a try. I'd probably been on the Serin Mound for no more than 20 minutes, chatting to a birder callled Graham about whether a cow on the marsh was dead or just enjoying a very deep sleep, when a large black bird flew through my bins. I called it straight away, when you see a Raven you have seen a Raven. A second bird wasn't far behind, and one of them then landed on the aforementioned cow, thus answering our question. What bounty! However not far behind it was a farmer in a 4x4, out counting his cows and coming up one short.....the birds backed off and found something less substantial to tuck into. 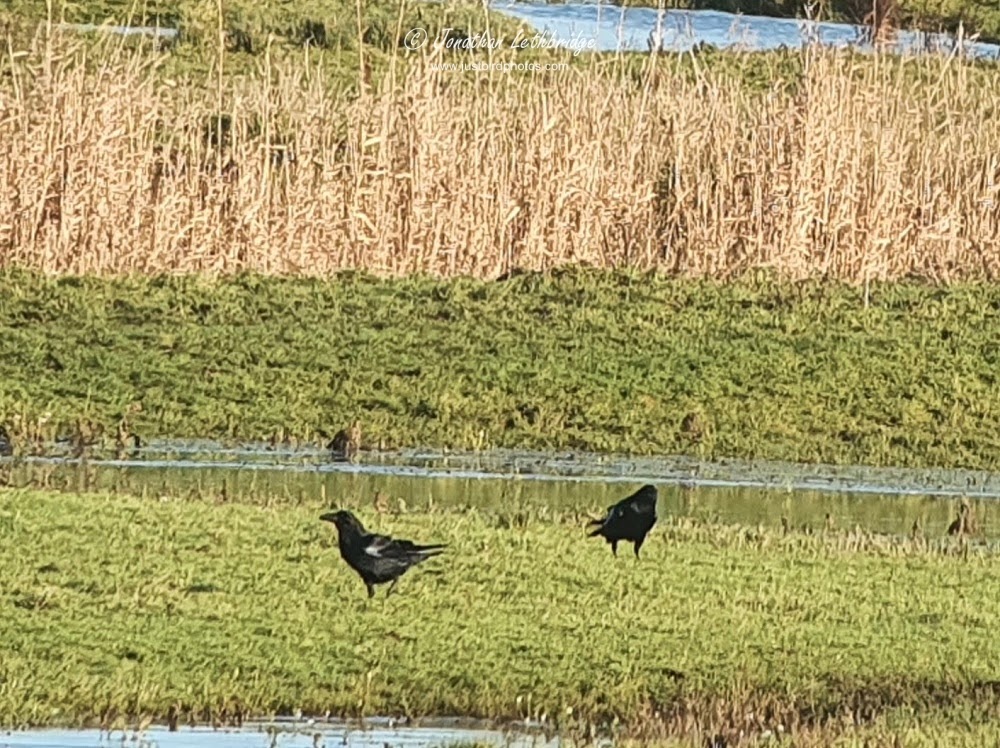 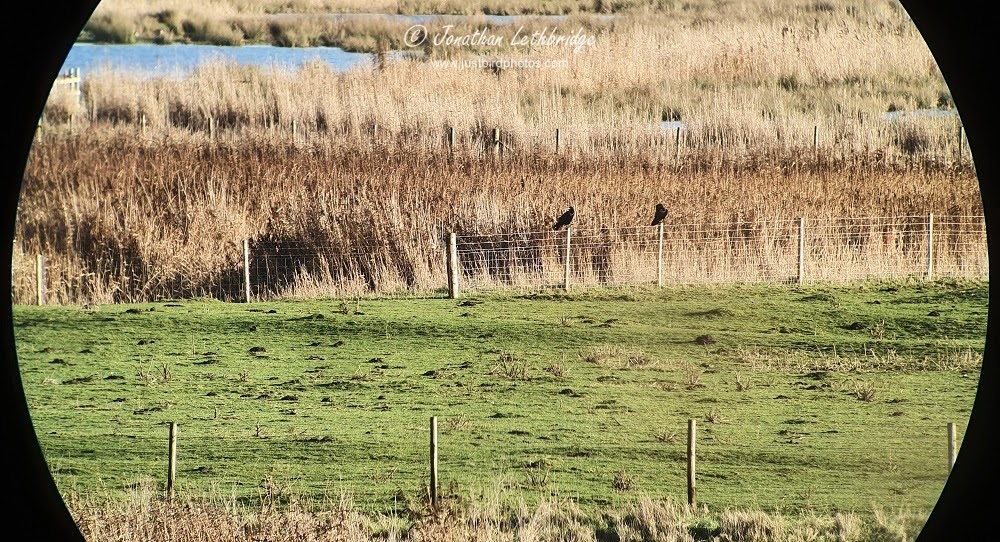 They stuck around for the rest of the morning, clearly lots of good eatin' out on the reserve, and I could pick out their enormous black bulk from pretty much anywhere along the river wall. One to go.
NB When I has happily inking them in a few minutes ago they initially came up as species #200, but then I realised that the two White Storks I'd seen from Rainham in March this year were being counted in the total, whereas in all likelihood they were birds from the breeding program at Knepp in Sussex. These days it would seem to be almost impossible to be certain that any White Stork is kosher, so to be on the safe side I'm calling the Ravens 199 and crossing my fingers for a wintering Bullfinch. The next one of those that I hear about in the Cordite I am dropping everything and going straight there.

Posted by Jonathan Lethbridge at 15:03