At the end of last year I began an equivalent post bemoaning my feeble efforts on the patch. I was reconciled to it I think, I have no desire to be restricted by that particular variety of nobility. Fast forward twelve months and neither do I now, Wanstead Flats simply does not have anywhere near the breadth of birding that I need or am satisfied with. However for much of this year it has been about all I have been able to do and I am truly thankful that it is as good as it is. There are better places to live for birding but it could be a lot worse. 2020 was the year of the patch or nothing. 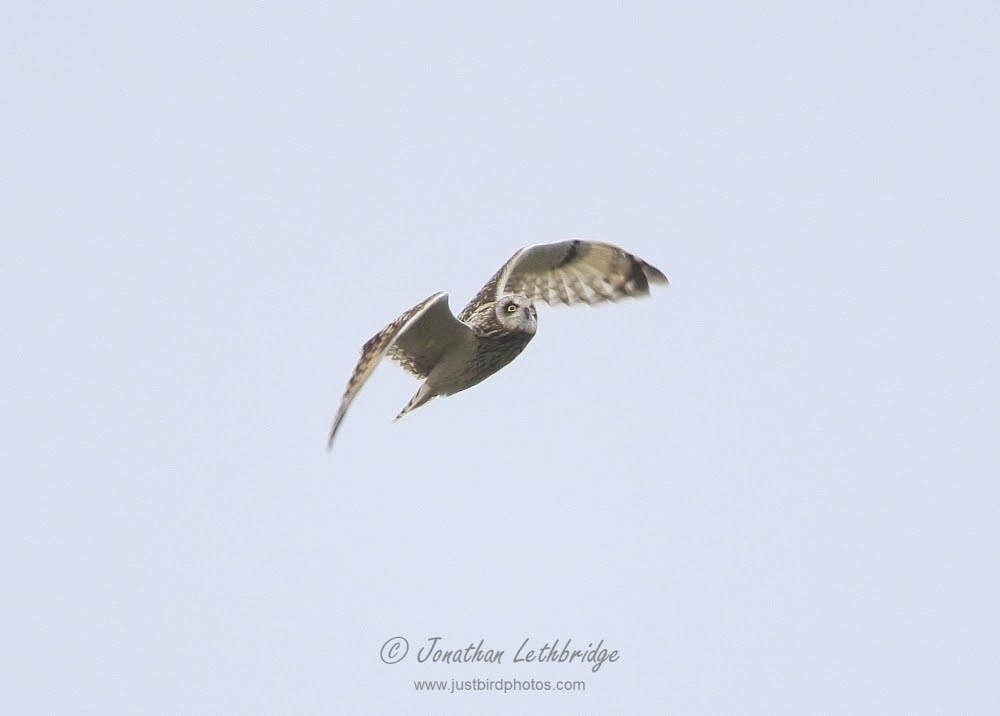 And for some parts of the year it really was nothing! But I am a birder, and birders cannot not bird. No matter where they are or what they are doing birders are always tuned in to movement and to sound, to the bushes, the trees and the sky. I channeled this in a big way in 2020, mostly from the bedroom balcony which overlooks our garden and the surrounding neighbourhood. With the additional potency of NocMig my garden list went ballistic. Tawny Owl, Moorhen and Coot were common, but surprisingly there were multiple instances of Oystercatcher and other waders. Soon I was to be found not in bed asleep, but out on my balcony, wrapped up and listening for calls in the dark. With snacks. It surpassed my wildest expectations. I added - 'live' - Common Scoter (along with most of the country it seems!), Whimbrel, Little Owl and Common Sandpiper. The ones that got away whilst I was sleeping included Little Grebe, the aforementioned Oycs, Green Sandpiper, and most amazingly of all, a Quail!

Away from heard-only, long vigils in the early morning, or on conference calls during the day, allowed me to pick up Tree Pipit, Reed Bunting, Crossbill, Siskin, several Short-eared Owls, Raven, Marsh Harrier (thanks Nick!) and astonishingly a Curlew!  My garden list, static for two years, jumped from 82 species to 93.

The same story played out on the patch. After 16 years of living here adding patch ticks is supposed to be quite hard, but all the additional time in situ unsurprisingly paid dividends - Whimbrel over the vizmig point, Common Cranes from the same spot. My patch list total is now 159 - when I first started birding here and saw what long-standing patch workers at places like Dagenham Chase had racked up I rated my chances of ever attaining those dizzy heights as non existent. Similarly when I first moved here one of my early year lists was about 70. This year I picked up all the usual migrants as well as some of the birds I missed in 2019 like Common Tern and Shelduck, and with the White-fronted Goose at the end of November I broke my long-standing patch year record of 118. The recent Med Gull has put me onto 120.

I also said at the end of last year that I intended to do a lot more birding in the UK and less birding abroad. Little did I know! I posted a graph that showed a slow slide towards nonchalance. But now look! 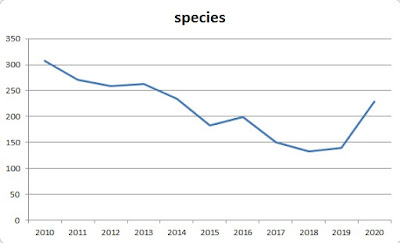 The trajectory has changed dramatically! OK so this is not exactly a competitive year list total, a mere 229 species, but compared to recent years it is nothing short of remarkable. Largely this is a result of a birding break in Yorkshire and a couple of family trips to Scotland. My birding away from London other than this has been pretty minimal but a few well-timed and well-planned day trips can accomplish quite a bit. Next year I hope to do more of the same if we are allowed out of our houses.
A graph of my world birding would look very different, the exact opposite trend. With planned trips to Israel and Colombia I was going to see loads and loads, possibly more than ever before even though I was not going to be travelling as much. As it was I snuck in just two birding trips away before the shutters came down and I have to go back to 2010 to find a year where I saw less. C'est la vie.

For 2021 here are my predictions. I am reconciled to the first quarter of the year being dedicated to local birding as I think we're going to be in lockdown until at least March. You heard it here first. Things will then ease, but other countries will still not be very keen on seeing people from the UK and so travel will continue to be restricted or at the very least, rather complicated. So the first half of the year will be all about birding in the UK. I can cope with that, provided I am allowed to go to the coast. After that I really don't know. It could be that the kind of places I would like to go birding are simply not safe to go to - spare a thought for those parts of the world with no infrastructure. We shall see, but right now the focus is close to home.