It's never over 'til it's over. A couple of days ago Simon discovered a drake Goosander in the Park - a classic cold weather movement. Not that classic however, as I've only ever had three sightings of Goosander over the years. So it was exciting enough to see me stop work and head out on my bike to twitch it quickly. It was still there yesterday morning, but as is the way with these things, not later in the afternoon when I turned up with my camera. It was there when I arrived with my camera this morning, but promptly flew off almost as soon as I arrived. Excellent. Fast forward to a few moments ago and it has returned, but this time with a friend!

It was only the other day that I was writing about how strange it was that single 'good' birds frequently draw in others - most recently the White-fronted Goose and the Med Gull both found company and now it has happened again with Goosander, two immaculate creamy drakes fishing together on the deep Perch Pond. 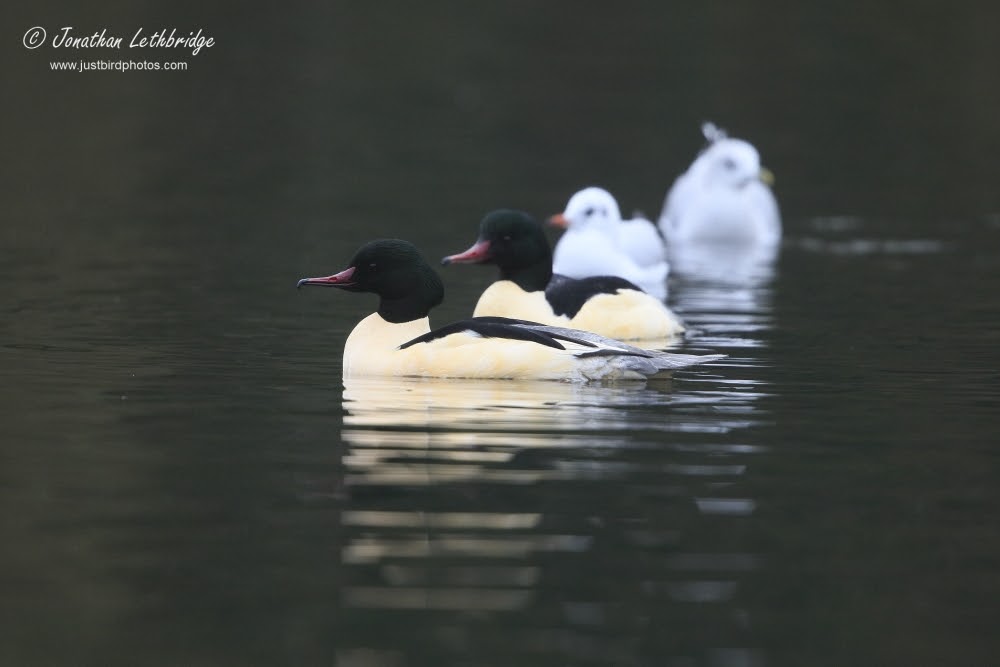 So against all the odds the year ends on rather a high note, and of course the all important year list advances by one to 121, a total that I am very pleased with and was rather unexpected. Even more unexpectedly this is my 150th post of the year, a nice round number that looked equally unattainable 12 months ago. So all that remains is for me to wish all readers a Happy New Year, and fingers crossed that 2021 turns out very differently!

Posted by Jonathan Lethbridge at 14:49