My garden is a seething mass of bright green and mid grey. Feathers and fur. I expect you can guess why. Earlier this week I cleaned my bird feeders and put them up for the winter. I am out of peanuts, but I have four feeders filled with mixed seed up, and then one with nyger for the Goldfinches and (I hope) Redpolls. Initially nothing happened. Every time I looked out of the windows the feeders were untouched. Yesterday morning all that changed.

Two of the seed feeders are the ones which are spring loaded and therefore close up when larger birds attempt to feed. So Parakeets, Woodpigeons, Magpies and whatever those grey ones with long furry tail feathers are called - been through the Collin's a couple of times but can't find them. That does not stop them trying of course, and for now at least they are trying relentlessly, which means that the smaller birds that I am trying to help out simply don't get a look in. At any one time there are Parakeets in the branches above, Feral Pigeons desperately clinging on with one gnarled foot whilst trying to hover in a position where they can peck through the distribution port, and Woodpigeons wandering around in small circles below hoping for a windfall. Every now and again a furry lighting bolt launches a futile attempt, catapulting itself onto a flimsy branch and worming its way down before falling off. As far as I can tell not a single small passerine has been able to sneak a single measly seed. Hopefully the novelty will wear off and they can get a chance.

One of the other seed feeders is surrounded by a wire cage that nothing bigger than a Robin can penetrate. Sat on top of it are two Parakeets. Sat below it is a Woodpigeon. All three of them are scheming. Let them scheme I say, but couldn't they do it somewhere else?

That somewhere else is my sacrificial seed feeder. It has zero protection, no cunning baffles whatsoever. It is hanging at the other end of the garden in my Monkey Puzzle tree - I don't want it to be too easy. The idea is that if there is a food source requiring almost no hard work at all at the far end of my garden then all of the large fat freeloaders will congregate there to gorge themselves stupid, thus leaving the "real" birdfeeders alone and available to be used by the Tits, Finches and other small birds for whom winter feeding really makes a difference. Unfortunately I failed to correctly estimate the sheer numbers of Parakeets. I can barely even make out the feeder at the bottom of the garden at the moment, it is just a seething mass of green, and the seed level can be seen decreasing in real time. Parakeets adorn the surrounding branches like tropical baubles. Fights and disagreements are frequent, and what happens is that the losers and latecomers come and lick their wounds and consider their next moves at the feeders closer to the house. It is incredibly frustrating. In prior years I have given up and simply taken all the feeders down. For now I will persevere but I am already getting quite cross with the whole situation. For any birders living in areas where this green scourge has not yet arrived and who are hoping to one day get Parakeet on their patch list, be careful what you wish for! 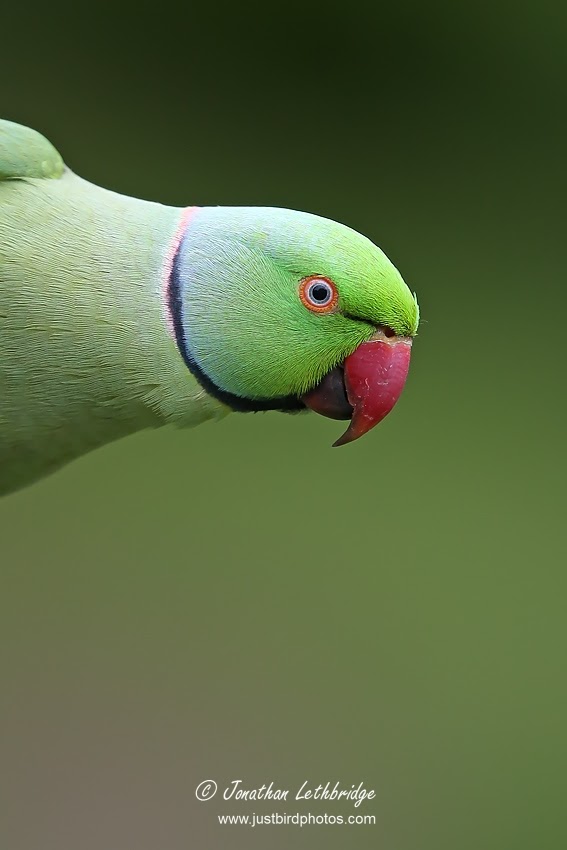