Birding locally has been slow to say the least. It is a vicious circle - a rare visit to the patch results in a dreary trudge around seeing very little. Unless you are some kind of masochist outings like this reduce the desire to go and do it all over again. The frequency of birding reduces, you see less, which in turn reinforces the view that the patch is rubbish in November and you go out even less..... I chanced upon a comment on one of my patch year list "pages" the other day, written by a visitor to the blog years and years ago. They asked why my year list appeared to stop in November. Unfortunately I didn't notice their question back then but let me address it now. One, the number of new birds to see on the patch naturally dwindles beyond October. And two, well, see above.

My last visit to the patch, possibly only my third this month, was a case in point. The highlight was a Stonechat. Or maybe the back end of a Snipe as it disappeared into the distance. It's a toss-up and I'm not sure even now which of these two birds I was most pleased with. The Snipe as any wader on the patch is semi-unusual, or the Stonechat as I hadn't seen the species for what seemed like ages and it was good to know that they were still there. I still harbour hopes of them overwintering, although with the weather still so mild this is far from certain at this point and a cold snap could easily see them off.

I suppose this is proof if it were needed that I already have half an eye on January. Most birders probably do. The last few weeks of the year tend to be uneventful, a slow slide into dark mornings and the early onset of evening. If like me you have an office job (or in 2020 a dining room table job) this likely means that you don't see much of the daylight hours, logged on in the half light and with several hours still to go after it gets dark. Weekends become increasingly important, but with such slim pickings locally its hard to get excited by this brief change in routine.

Instead I find myself turning to minor acts of home improvement. Nothing major - I really mean that. For example last weekend I tidied up the two cupboards under the stairs which had become a haven for crap we didn't want to see any more. Out of sight out of mind. I found heaps of things related to small children - a foldable Spiderman chair to fit a six year old (my son, 16, was delighted to see it again), a garden play tent with a tunnel, a bucket and spade, half a toddlers croquet set with mallets approximately eight inches long, some old packed lunch bags, half a kite, some sunglasses to fit a four year old, and twenty-thousand bits of crafting stuff. I also found three dead halogen spotlights, two House Martin nest boxes that I'd thought lost and bought replacements for, parts of the terrace barbeque that I hadn't bothered installing in 2005, about 40 of those long-life yet short-lived spiral light bulbs, some still brand new and long since replaced with LEDs, an old electric heater, a wooden squash racket, and some clips for wall-mounting a torch that I bought in about 2010 and that had been hanging on a nail waiting for the right moment. Ah-ha, DIY!! Excitedly I got the drill out. Back in the day I would have simply used a hammer and a nail to create some guide holes for the screws, but seeing as I had just found the drill at the back of the cupboard I decided to go full on. There is something uniquely satisfying about drilling holes in wood and it didn't disappoint. I didn't manage to get them perfectly straight of course, this is me we're talking about, but the clips are forgiving enough that it didn't matter. A triumph! Then I discovered the torch didn't work. Hopefully it is just the batteries, but as I promptly ordered the wrong size I can't yet say... 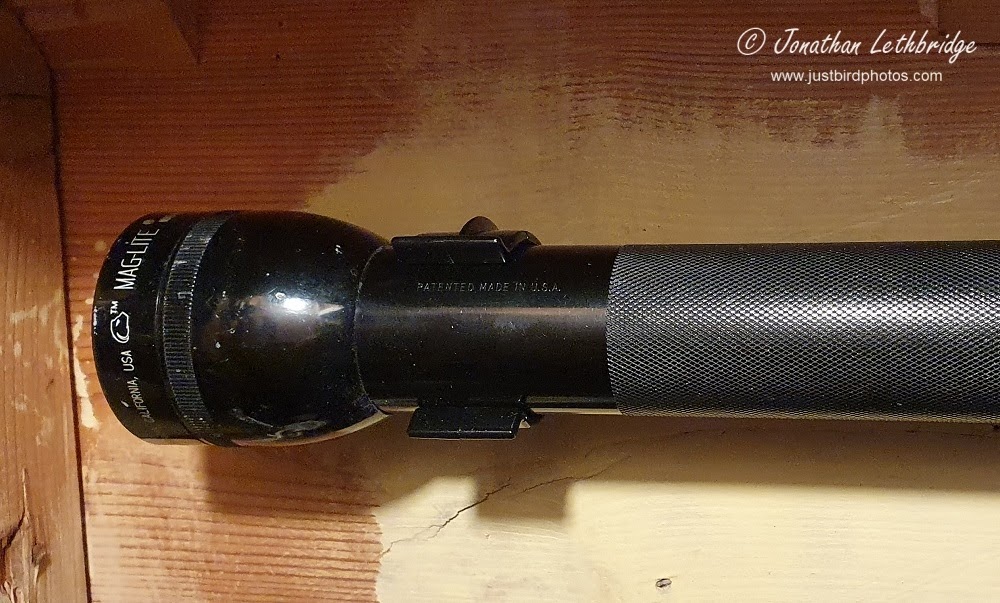 The cupboards under the stairs are now a structured haven of common sense and order with loads and loads of room for the next decade's worth of rubbish to accumulate in, albeit that I will fly into an immediate rage for at least the next month if any member of the family sullies my fine work by carelessly chucking something in there and then simply closing the door behind them. Unfortunately I had forgotten that all of the local recycling centres are currently closed so the front hall now looks like somebody reversed a battered Transit van into it and fly-tipped the contents. Mrs L looked at it and said I should go out birding more.

Posted by Jonathan Lethbridge at 09:01