I've just spent a long weekend on holiday in Cornwall. Famille L rented the entire Lizard YHA for three nights - rather cool to have the run of the place ourselves, but the empty rooms were a reminder that it should be full of people. Full of chatter, of banter, of comparing sections of the coastal path, of wet but happy walkers and visitors winding down after enjoying the incredible scenery. It is good that they can at least generate some income during this period via exclusive lets (six people or fewer from one household) but that's not what the YHA is for and it did feel rather odd.

We chose it for its location rather than its creature comforts, and it did not disappoint. What a view! What did disappoint was the weather, and a great deal of our trip was a write-off - in particular thoughts of birding and landscape photography largely went out of the window. A seemingly never-ending succession of brutal south-westerlies hammered the Lizard day and night. The peak gusts rarely dropped below 40mph, and overnight on Friday and on Saturday morning were up at 60 plus! The Atlantic airstream also delivered copious amounts of rain, much of it horizontal, and a family walk on Friday before it got really bad saw us return to the YHA resembling drowned rats. Luckily we had packed lots of wine, and so whilst the sea raged with huge rollers coming straight in from Biscay and smashing against the Cornish coast, we were able to pull a cork or two and admire it from above whilst being gently nourished by soft tannins. It is fair to say that the seas were epic, a constantly churning rollercoaster of lumpy green ending in a barrage of white foam that frequently dwarfed the enormous coastal rocks of Lizard Point. When not drinking and looking wistfully out of the window, short breaks in the intensity of the weather allowed me to spend some time seawatching from a sheltered spot either right by the hostel or down near the National Trust building. The very end of October is not an especially productive time, but I was pleased with a Sooty Shearwater on Saturday morning to add to the more expected fare. The real draw was the corvid action - it has been many many years since I heard the "chow!" of a Chough, and they and the Ravens and Jackdaws positively reveled in the conditions, performing delightful and outrageous acrobatics above the cliffs in conditions where I could barely stay upright. Choughs in particular are fantastic birds, and I was delighted to be able to run back and coax at least two of the family out to see them wheeling overhead.

During a brief break in the weather on Saturday afternoon I had a hopeful sniff around the shelter of Church Cove on the east side of the peninsula but the Setophagas were not playing ball. I have a horrible feeling that in the coming days somebody will dig out something utterly mind-blowing from one the Cornish valleys, but that person will not be me as half term is over and I am back in London. And given recent developments, staying in London.

Anyhow, here are a few snatched photos of the sea which ended up being the focal point of our short wind and water-dominated break. We were very glad we were not on it, and instead could just admire its power from the safety (not comfort!) of the land. I could spend hours looking at the sea, and looking ahead I think a later phase of my life may need to be spent close to it. For now though I can just think about it from time to time, and of the birds who live next to it that are utterly unphased by weather that has softies from London scurrying for shelter after only a few minutes. 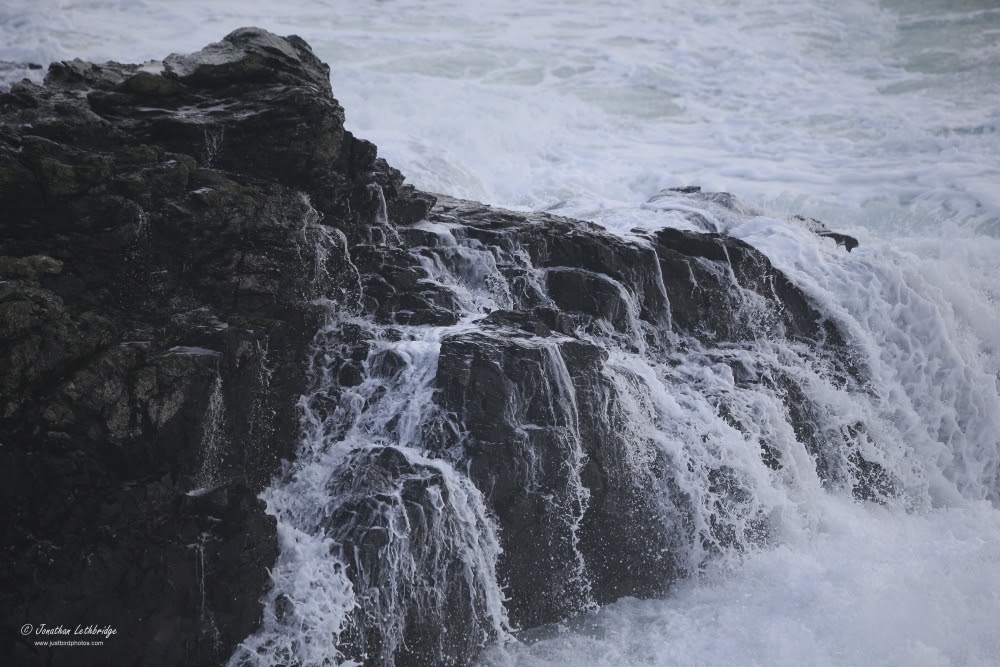 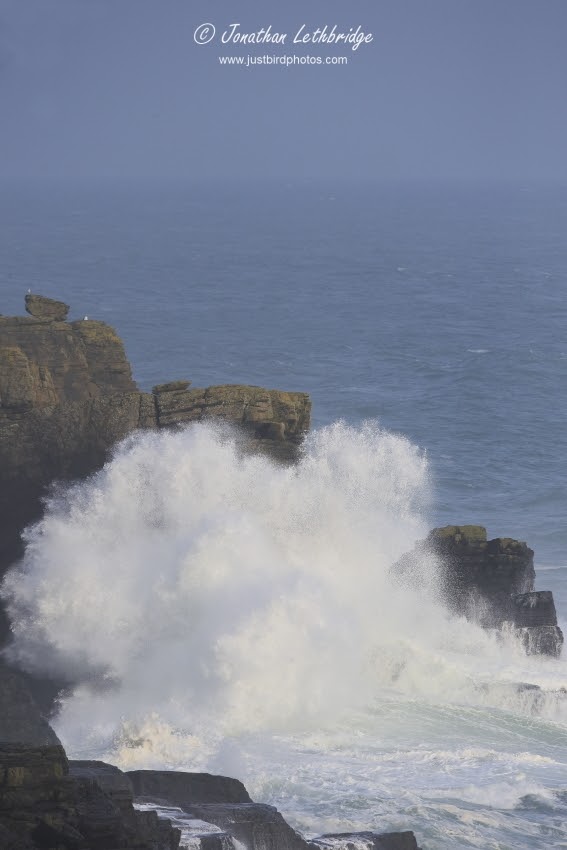 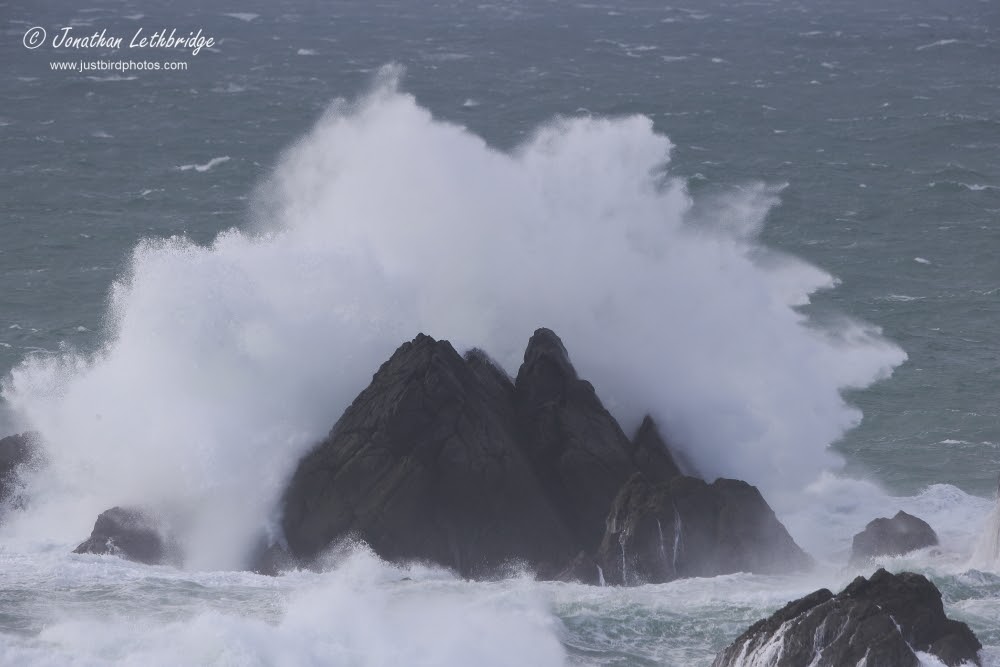 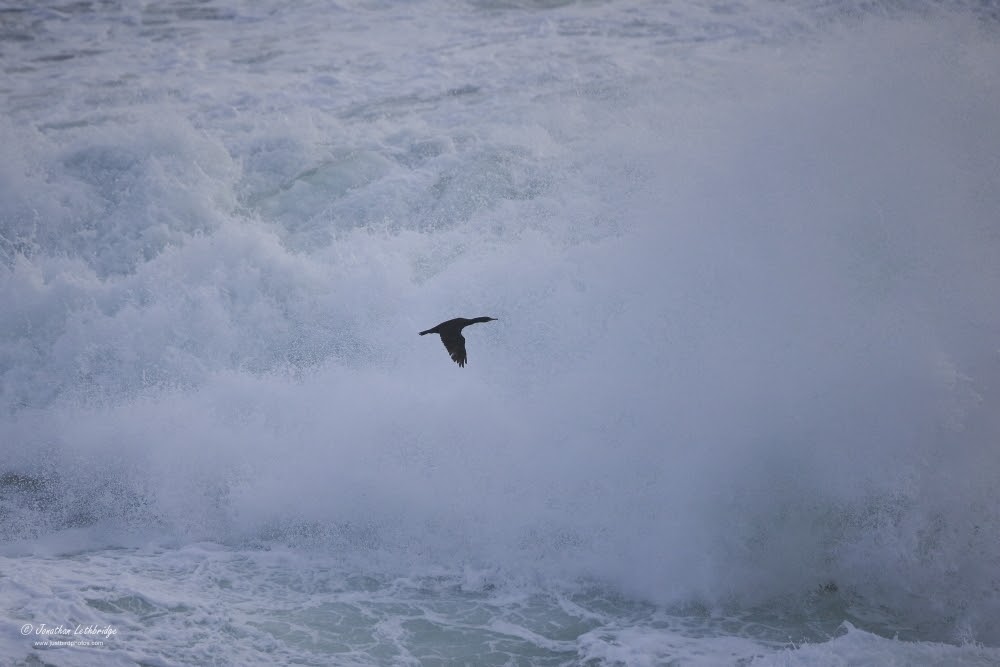 Posted by Jonathan Lethbridge at 16:41