I told you about Cornwall. Seven hundred miles for a thirty second flight view of the American Bittern. In the cold light of day, I wonder why I do it? Mrs L wonders why I do it. Presumably anyone who watched the "Twitchers, a very British Obsession" documentary the other day wonders why I do it?

Why do I do it would therefore seem the obvious question. Well, I like seeing rare birds. There is a small element of listing I'll admit, but largely it's about seeing the bird. I've seen plenty this year that don't contribute to any list whatsoever, and enjoyed them just as much. I'll never be one of the people that documentary followed, who can't sleep at night, for whom the nervous tension is unbearable, and whose entire life is dominated by the accumulation of ticks. Unlike them, I will never get to 500. I'm not competitive enough, not driven enough. As the distances become ever more absurd, I'll bow out gracefully. Give up, if you like. Perhaps go see the odd one or two, but charter a plane at a moments notice to fly me to some far-flung island so that my list can go from 480 to 481? I don't think so, or rather, I hope not. It's just a bird, there will be others. Or maybe there won't, but does it actually matter? I'd say it doesn't.

So why then am I fretting about the coming weekend? I don't have to go and see the Pied-billed Grebe near Manchester. Nobody is making me go. Likewise the American Robin in Devon. My rather meagre BOU list is 363. Will it be a huge disaster if it remains on 363 rather than advances to 364, or if totally crazy, 365? Will I be a different person, will I be able to hold my head that little bit higher? Will people look at me with that extra little bit of respect, and as I pass whisper to each other "See that Jonathan Lethbridge, he's seen a Pied-Billed Grebe you know"? I think I know the answer.

Funny old game isn't it? There are plenty of ex-twitchers out there. I wonder what their 'moment of clarity' was, when it was that they decided that they would jack it all in and just go birding for the pleasure of it, and leave the obsession behind? I reckon I've got a few more years of twitching left in me, but people who know me realise that I am becoming more and more fed up with it. The same people call me a filthy twitcher of course, but that's fair enough, these past few years have been pretty bad. Not so bad that a TV crew felt a burning need to follow me round the country for sound-bites to make me appear a luncatic though, for which I'm thankful. But bad enough that I recognised quite a few of the people, and had actually been present at some of the locations. And bad enough that Mrs L felt able to draw unfavourable comparisons...

I wonder if I could become a local twitcher, or set myself a maximum (and small!) range, and not travel outside of it? Apart from a few birds, everything turns up closer eventually. Take that Brown Shrike at Flamborough for example. I know more than a few people that went up for that, some of them got it, some of them didn't. Hours in the car, hours. I didn't go, perhaps back then the thought of that distance put me off? Perhaps it was midweek and I was, shock-horror, working? It doesn't matter, as guess what turned up on Staines Moor last year? Similarly I declined to go to Seaforth for the White-tailed Plover, I couldn't face the time travelling for the views I would likely get. There was space in a car, and I passed it up, wondering if I'd made a very bad call indeed for such a rare bird. A few weeks later I spent several hours scoping the same bird at Rainham, it was fantastic. The good things come to those who wait. Could I really do it, have I really got the patience and the will-power? 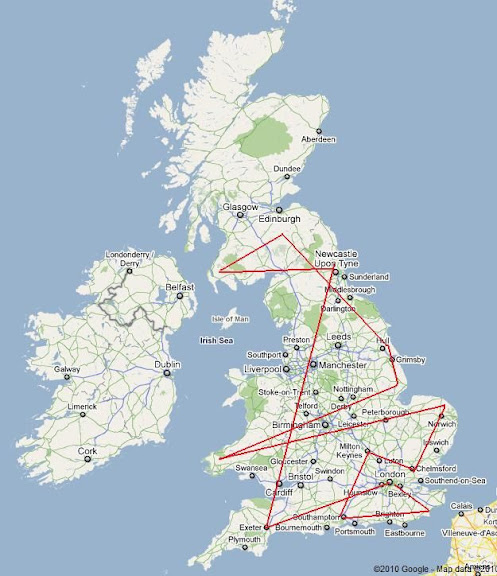 My weekend plans
Meanwhile Shaun, Bradders and the Monkey are all calling and emailing, discussing potential plans for the weekend involving Manchester, or perhaps Devon, or perhaps both. London to Manchester via Devon has an all too familiar (and unpleasant) ring to it.... Right now, I don't yet know what I'm going to do. Whatever the twitch is, it has the potential to either be horrible or be a fun day out with the boys in equal measure. It all depends on me, and my frame of mind. Latterly I have been approaching all twitches in a very negative manner, which is ridiculous, and I know it. Either accept what you're letting yourself in for, and approach it as positively as you can, or don't go. And if you do go, make a day out of it, make the bird in question just part of the trip.

And most importantly, don't dip.
﻿
Posted by Jonathan Lethbridge at 17:02